Tom Megginson alerted us to an interesting example of “astroturf” activism.  After complaints from religious groups, the New York City transit authority took down the following ads from buses running through largely Hasidic Jewish communities:

Georgi Vodka saw the move as a marketing opportunity and hired models to wear the bikini pictured in the ad and pretend to protest the censorship.  Playing on their nudity, their signs had slogans such as “MTA should butt out of bikini ads.” 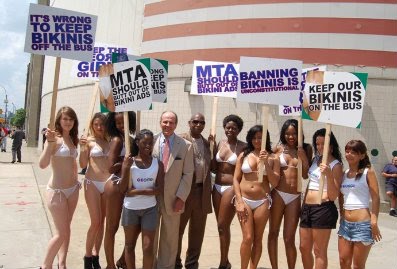 To contrast this with genuine grassroots campaigns in which “regular” people come together to try to change something about their society, sociologists call this type of marketing “astroturf” activism, fake protests arranged and paid for by companies.

So first we have a religious community expressing its displeasure to the city regarding an advertising campaign they find offensive.  They organize, in true grassroots fashion, to have the ads removed from the buses that travel through their neighborhoods.  Then a company hires people to put on a counter-protest, in true astroturf fashion, turning what was a simple case of collective action into (an apparent) social conflict.  But, as is characteristic of astroturf movements, Georgi isn’t doing it in an effort to shape society into a form that it finds good and beneficial (as the Jews are, whether you agree with their opinion or not), they’re simply trying to make money.  And they’re willing to deride the Hasidic community if they need to.  In fact, Georgi spokesperson Todd Shapiro told Fox News that they have:

This is a good example of how even protest has been co-opted by marketers.  Our rights as citizens to mobilize can seem ineffectual and trivial when solid efforts, like that of the Hasidic community, are mocked by more powerful organizations.  Further, “non-profit” organizations funded by companies or industries make it difficult to know if any given protest is grassroots or astroturf, such that all activism is suspect.

But, as is characteristic of astroturf movements, Georgi isn’t doing it in an effort to shape society into a form that it finds good and beneficial (as the Jews are, whether you agree with their opinion or not), they’re simply trying to make money.

Is trying to make money not also noble, when it is done thru voluntary exchange?

Further, “non-profit” organizations funded by companies or industries make it difficult to know if any given protest is grassroots or astroturf, such that all activism is suspect.

You mean people might have to think about the message itself rather than who is saying it? Heaven forbid!

Of course all activism is suspect. Activism is not directly about change; it's about raising awareness of an issue and trying to affect the narrative of that issue, in order to encourage that change. In other words, it's marketing. That's true whether it's the SNCC or PepsiCo doing the marketing. For that matter, it's true whether it's the SNCC or the KKK, both of whom are real, home-grown grassroots movements. In all cases, protest of this sort is intended to call attention to a segment of opinion and present that opinion as the majority, whether it is or not.

I'm siding with Georgi on this one. The ad is not outrageous or any less tasteful than most ads of that nature, and the company paid the NYCTA for the displays. The fact that some people dislike the ad because it offends their religious feelings should not be a factor that enters into the business of advertising that the NYCTA is participating in if the ad is not socially unacceptable otherwise.

The atheist community has been putting up posters, billboards, and transit ads all over the world and has also had to deal with the hurt feelings of religious communities over simple statements that are only offensive it you want to keep your religious views the prevailing ones. They've had to fight to keep the ads up in many places. I for one don't want religious complanies (that is non-profit companies selling religon) to determain what ads are okay or not okay.

I think that Georgi is showing great restraint and cleverness in using the Jewish communities own methods against it, rather than sueing the NYCTA.

Consumer citizenship is a new and interesting research field:
"A consumer citizen is an individual who makes choices based on ethical, social, economic and ecological considerations. The consumer citizen actively contributes to the maintenance of just and sustainable development by caring and acting responsibly on family, national and global levels."
For more see: http://www.hihm.no/concit/

In Israel, the ultra-orthodox and the Hassidic would simply vandalize the ads and bus until it would be too expensive to have the ads running. There's a city called Bnei-Brak that got all advertisements that go through it to pass a "decency committee" that way.

Fascinating example. Reminds me of marketing "manifestos" that utilize "revolutionary" rhetoric as if anti-Capitalist yet have a neo-liberal agenda.

How would you react if a bunch of college kids had taken up the campaign without being paid? The results would have been the same, but the (apparent) motivations different. Would it be better?

I don't see how in the abstract you can prefer one of these bands of humans.

I really don't like the co-opting of grassroots legitimacy. It's just all kinds of gross to me.

Also, it needs to be pointed out that this takes place in an area populated by mostly religious minorities. They aren't preventing the ads from running any where else, they just don't want them in their backyard. Is it not a noble cause to have some sort of measure of control of your cultural environment? The decision of the company to "parody" the Jewish protests is rubbing me the wrong way and comes off as Antisemitic. I don't have any lost love for the stricter Jews (being very Liberal myself, and "escaping" that sort of lifestyle at a younger age), but the argument that these Jews just need to except that nobody respects their culture and their wishes because they're a minority and somewhat odd -- according to wider public opinion -- smacks of a subtle sort of intolerance. I don't like it.

Furthermore, this isn't a great ad. It's objectification of women, which can be seen by the use of an object totally unrelated to liquor (an ass) being the prominent feature of an ad of a product that has nothing to do with asses. Notice I said "object". The woman's ass is the primary focus of the ad: the ad objectifies the female body by eliminating any sort of pictorial evidence of activity or identity. It's just another ass for sexual consumption. As someone who's extremely liberal, that's offensive enough. I have nothing against nudity. Nudity for everyone! But if you think that this ad is about nudity, you're kidding yourself.

The Hassidic Jews rightly protested their ability to control the cultural atmosphere of their immediate surroundings without stepping on the rights of anyone. A corporation is not a person, and since when did the 1st amendment cover the right to use any sort of material, no matter how obtrusive or insensitive, to advertise? Protip: it doesn't.

The corporation fires right back with a faux "protest" that mocks their culture, their right to exist, and their right to demand a modicum of respect. Coupled with the fact that Hassidic Jews are a religious minority, the faux "protest" is absolutely stepping on someone's toes: it sends the really great message that if you aren't on board with the sexual objectification of women for marketing purposes, then you have no business existing.

The original grassroots action of the Hassidic Jews was benign and respectful. The corporation's response is trashy, disrespectful, and outright Antisemitic. Plus, it makes a mockery of a citizen's right to be heard as a legitimate grassroots voice by hijacking the usual signifies of citizen protest. It's disgusting. I can't believe anyone would defend it.

You don't think "legit" grassroots campaigns aren't already co-opted? By political parties, by people desperate for a cause and not picky about which one it is, by frat boys who think it's a good way to get laid, etc? Just because you don't work for an eeeevil corporation doesn't make you Ghandi.

[...] sad it is that even protesting doesn’t belong to the people anymore.  Or, as the brilliant Sociological Images puts it, Our rights as citizens to mobilize can seem ineffectual and trivial when solid efforts, [...]

This ad campaign was not targeting the Orthodox community... this bus line goes through a FAR MORE DIVERSE community than these ultra-religious. The original posting claims that the orthodox community got the ads removed "in true grassroots fashion" -- that's just laughable.

They got the ads removed because they are an extremely powerful voting bloc... this is not a vulnerable population. This is a small and recalcitrant population that is trying to maintain a 'convenient' approach to life -- 19th century Eastern European culture and social norms when it's convenient... and 21st century conveniences when it suits them. These communities are rife with hypocrisy and the motives are far from pure. The Williamsburg bike lane mentioned above? It had nothing to do with skin... it had to do with outsiders entering *their* domain. It's all about maintaining insularity and control.

Have you ever thought it's not the "offensive" display of skin that this community has an issue with, but rather the scary prospect of their womenfolk getting uppity ideas about their own bodies?!

The term 'astroturf' is attributed to Lloyd Bentsen, a politician, to describe lobbyists. The strong implication in this post that sociologists invented the term is almost as unamusing as Jenn's tired trotting out of 'antisemitic'. Which in turn is almost as tired as a woman's body being used to sell a non-body product, or the false claim that their 'First Amendment rights' are being trampled. While I am usually inclined to cheer anybody taking on religious extremists, in this case Georgi are just being jerks.