To Whom Do Children “Just Happen”?

The Pew Research Center, in a report on American motherhood released this month, reported that 35% of people say that their first child “just happened.”

I think this is fascinating in light of the fact that many Americans are generally committed to the idea that we control our fertility.  Safe(r) sex and family planning campaigns tell us that, if we make the proper choices, then we will (very probably) not have an unplanned pregnancy.  They tend to downplay the fact that even the most effective methods of pregnancy prevention are not foolproof.  Let’s call this the ideology of near-perfect control of reproduction.

In fact, about half of all births occur as a result of an unplanned pregnancy.  So the fact that 1/3rd of parents say their first child “just happened” may actually be an under count.  An ideology of near-perfect control of reproduction, however, makes it seem really surprising that so many parents would choose that response.

Then again… maybe the ideology of near-perfect control of reproduction is a luxury afforded mostly to privileged classes.  The Pew report also offered data on who said that their first child “just happened”: 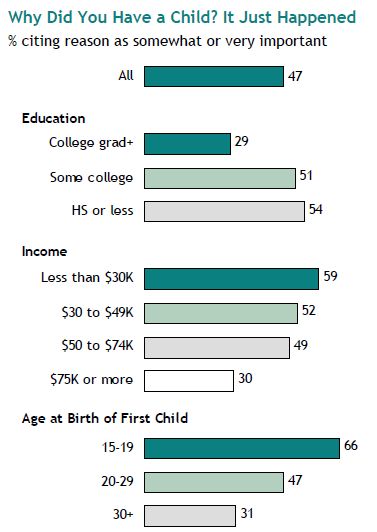 Notice that people with less education and lower incomes were more likely to have their first child by “accident” than people with more education and higher incomes.  They were also more likely to have their first child as a teenager.  These are the groups that we might expect, on average, to have less knowledge about birth control and less access to (especially more effective forms of) birth control.  Given that our society is class segregated, members of these groups may also be surrounded by other people who “just happened” to have kids.  The ideology of near-perfect control of reproduction, then, may not be as strong.  This may also contribute to a willingness to admit that it “just happened,” instead of re-fashioning the introduction of parenting as a fully conscious choice.

"This may also contribute to a willingness to admit that it “just happened,” instead of re-fashioning the introduction of parenting as a fully conscious choice." <--- Exactly.

If you have a child as a teenager, I think that affects the other indicators. I wouldn't conclude from these charts that lower education and lower income lead to more accidental pregnancies. You are probably less likely to graduate from college and will earn less overall.

Note: I do think that's the case, but I wouldn't argue it from these charts. =)

A child that "just happened" isn't necessarily synonymous with a child that happened "by accident." Many parents I know made a conscious effort to have their first child, buying ovulation kits, checking in with their doctor, stepping up sexual activity, etc. However, with the second or third child they were much more passive, not taking any steps to have the child beyond not using protection. They adopted a "we'll see what happens" approach. If asked if they had a child that "just happened" they answer 'yes' even though the child was not necessarily unexpected.

Yes, 50% of all pregnancies are unplanned. I think that figure includes even those pregnancies that end in abortion or stillbirths, so it still may be true that 1/3 of children born arrived by accident. Another % of those pregnancies didn't result in live births.

This is the statistic that preconception programs are based on. Clearly, not everyone is planning their pregnancies. Lack of access to birth control is one reason, but there are social reasons why some women get pregnant, even when they didn't plan it. The point of preconception health is to raise awareness of this statistic, get people to think about planning their pregnancies and also to get women healthy before they ever become pregnant. The same communities with the most teen births and the most unplanned births are also the communities with the highest rates of infant mortality.

Preconception health programs are often criticized for just assuming that all women are in a preconception phase because most women could be potentially pregnant. The criticism has valid points, many women clearly do not want to be mothers and are offended by contrary assumptions. But, at the same time, if women are getting pregnant anyway, even when they don't plan it, it's better to teach them now about how to avoid infant mortality.

But wait, teenagers universally have lower education and income. So that data doesn’t tell us if it’s age or income/education that is responsible for the unplanned child rate. We need the cross tables to isolate each variable.

This wording makes me uncomfortable. Do they define what "just happened" means? Some people, within the context of seeing others have trouble conceiving, might think that "just happened" means that they intended to have the child, but they didn't have to put effort into the pregnancy. Considering that people with higher education also have children later, their ability to have a baby "just happen" might be reduced.

I have a number of college-educated, high-income friends who got pregnant before they were planning to. I blame some of it on the scare tactics used when people talk about infertility. A 25-year-old is getting married, figures it will be hard to get pregnant (because we all read about how you shouldn't put it off) so she goes off her pill early and is already pregnant on her wedding day! Happened to two friends of mine. They were planning on kids, obviously, but I think they might mark "just happened" on a survey like this, at least regarding the timing.

It seems that Pew needs to work on defining its labels.

So do babies "just happening" in the face of "near-perfect control of reproduction" have anything to do with 32-42% of young adults who claim to be avoiding pregnancy reporting that they'd be pleased about an unexpected pregnancy? http://thesocietypages.org/socimages/2010/03/09/young-adults-attitudes-about-pregnancy/

In her book *Birthing the Nation* Rhoda Kanaaneh examines fertility of Palestinian women in Israel and one of the recurring themes she finds is the use of a rhetoric of "accidental pregnancy" to counteract the stigma attached to a negatively characterized birth (in her study this was many children, in the U.S. this could be having a child while being the "wrong" age, class, race, or relationship). This rhetoric was used even when actions were taken to increase the likelihood of pregnancy, often becoming part of the story told (I forgot to take my pill, etc). Interesting to keep in mind that even if there was a clear definition of what "just happened" meant, the response may be measuring the social stories we tell about fertility (especially those in groups most scrutinized for childbearing).

What do they mean by "just happened"?

My wife and I were trying to have our first child. We were timing it by NFP and everything. It wasn't working. Then, when she was in her infertile period, we had sex again just to be married. Turns out she wasn't infertile. Our daughter "just happened".

I wonder if these people to whom child(ren) "just happened" had access to abortion? Because if they did, the child didn't "just happen" - continuing a pregnancy is just as much of a choice as terminating one is.

Anyone else have a problem with the "Age of Birth of First Child" statistics grouping 15 - 17 year olds in with 18-19 year olds?

[...] Maybe if enough people read this book we would find young women better understanding their ‘yeses’ and being more empowered in the delivery of their ‘noes’. Maybe those ‘yeses’ could be real ‘yeses’ instead of just a lack of a ‘no’. Maybe teenage girls will have enough agency in their own sex lives to move beyond ‘it just happened’ – which, by the way, is how more than 1/3 of first born children are brought into the world, they “just happen”. [...]