Thomas S. sent in this photo of the toy options for kids meals available from Burger King as part of their tie-in with the Marmaduke movie. The dogs are helpfully divided, as in most kids’ meals at fast-food chains, into those for girls and boys: 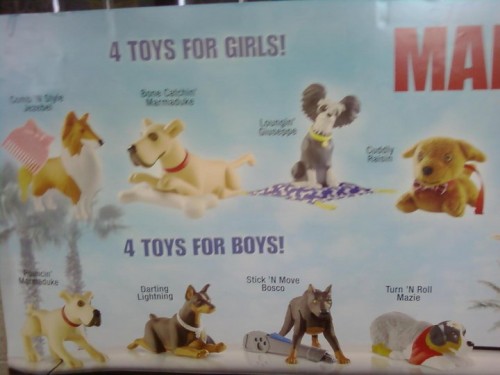 Notice the gendering of the dogs. Both girls and boys have the option of a Marmaduke figurine, though they are posed in different ways: the girl version is lying down, while the boy version seems posed to run or jump. The other girls’ options are passive in their poses, the descriptive words in their names (cuddly, loungin’, comb ‘n’ style), and what they do:

On the other hand, the boys’ options are given active descriptive names and different types of actions:

So the boys get the option of a doberman (or maybe a Rottweiler?) and what looks like an Australian shepherd, while the girls get a toy dog (a papillon, I think) and a collie, which is also a herding dog but here is presented as something to groom.

Obviously, the breeds and names (Bosco, Giuseppe, etc.) come from the movie, so Burger King didn’t create that part. But in creating the tie-in toys, different dogs from the movie were defined as girls’ or boys’ toys, and were designed accordingly.

It’s a great example of the feminine = passive, masculine = active gender dichotomy and the way children are socialized into it. Toys aimed at girls emphasize posing and appearance/grooming, while boys’ toys are usually more active and rarely involve grooming or dressing up (unless you count changing out the weapons G.I. Joe dolls action figures carry).

Of course, this doesn’t mean that kids and their parents will request the gender-intended toy. My sisters and I didn’t get kids’ meals often, but when we did, my mom almost always requested boys’ toys because they were usually more fun and did something, whereas the girls’ toys often just sat there. I’ve heard similar stories from lots of women. Given that men are discouraged from crossing gender lines more than women are, though, I wonder if parents are as willing to get their sons the girls’ toys if the son asks for it. And if we found the girls’ toys boring and wanted the boys’ versions, it seems likely that boys would generally reject them too.

Every once in a while I like to get a happy meal (especially if they have a cool toy) - when they ask "is it for a boy or a girl" I ask them to tell me what the difference in the toy is and which one they think is cooler. When I pull up to pay they always seem shocked to see a 25 year old male with no kids in the car...

I have a six year old daughter and a three year old son. When we get asked the question "Is it for a boy or girl?" we ask what each toy is, and ask the kids which one they want. We get a mix of responses, but typically they both go for the "boy" toys.

When I was a kid, I used to prefer going the drive-thru route at Mickey D's rather than go inside for this reason. If I was in the car, they would ask "Is it for a boy or a girl?" and I'd beg my parents to say "boy". (Note: These were the days of the car/Barbie dichotomy, and I've always preferred cars.) Unfortunately, if I was inside, they would see that I was a girl, and I'd get a Barbie. It's sad to see that this needless gendering is still happening, especially against kids' preferences. =(

Regarding boys toys rarely involving dressing up, my friend made a great comment the other day: "If it involves camouflage, then it's not dressing up."

(She wasn't being serious.)

I was in subway the other day with my 4yo son who, although usually wearing relatively male clothes, is almost always labeled a girl. Anyway, the woman looked at my kid, visibly uncomfortable and almost hostile, and asked if "the meal is for a girl or.......". I said "Oh, well, he's a boy." Relieved, she handed me a dinosaur bag. My kid was crushed!! His friend had just gotten a similar bag with longer straps and *butterlies* on it! I asked him if he wanted that bag instead. The woman rolled her eyes at my kid and handed him the purple bag saying, "heres the one with *pretty* butterflies." Ug. How about a bug bag and a dinosaur bag? And of course the dinosaur was a murderous looking t-rex.....

On the other hand, the kids meal was non-liscenced and relatively healthy.

Also interesting: the girl dog (at least , I'm assuming that Mazie is a female) on the boy's side rolls over, a move that generally means submission for dogs.

I have tried very hard to let my son feel as comfortable as possible crossing that socially designated gender line. This is difficult as I live in a very conservative area that values gender differences! We get whatever toy the paticular child is interested in and I try to specify before the worker asks for "boy" or "girl" so as to not indicate gendered ideas onto inanimate toys and then to my chidren.

My son has always preferred the "girl" toy, and I have always let him get it. Usually they will ask if I want the girl or boy toy and I say, "We'll have the car," or "The doll, please," or something like that. It does create confusion if we are inside and they see him, but I don't care. I HATE the fact they do this to kids. That Marmaduke thing is so stupid!

I have a 6 year old boy and I regularly ask for the "girl" toy, though I never call it that. The "boy" toys are often for some overly aggressive and occasionally non-age appropriate tv show/movie. Nerf Blaster or My Little Pony? My Little Pony please! I also occasionally opt for the "toddler" toy when both the girl toy and the boy toy are objectionable in some way.

This reminds me of some 101 Dalmatian plush plush dolls my family used to own. One was the adult male dog from the Disney movie, and the other was the female. The male was standing up on all fours, while the female was lying down.... she was always harder to play with.

[...] Sociological Images has more on this norm and how kids are socialized into it through toys, which I’m going to talk more about later this week. For now I just wanted to put together a list of other Christmas carol lyrics that have gendered aspects. For this post, I’m going to focus on secular carols, since I don’t feel I have enough religious knowledge to do justice to an analysis of sacred carols. Keep in mind I’m not saying the lyrics below are inherently bad or harmful; only that we should think about how they subtlely (and sometimes not so subtlely) reinforce gender roles. [...]

I know it's been months, but I'm really struck by the normalization of feeding US ground beef, probably the world's most lethal food product both in the Russian Roulette sense of e. coli and the long-term damage sense of artery buildup etc, to children on a routine basis. Not to mention the crass commercialism of selling burgers and fries (!!!) to small children by giving them a free toy. If any other equally dangerous product were marketed to children this way, we would rightly be up in arms, I think.

During the month where McDonalds had Littlest Pet Shop or something else (supermen I think) and I worked there, at least 5 boys wanted the "girl" pet toy and I think 2 girls wanted the boy toy. I don't know if the parents were under more pressure, being inside the restaurant and the kid saying what they wanted (we asked the kid, and I never asked girl or boy, but went with Pet Shop or Superman, because I think gendering toys is dumb, I loved them all!), so they didn't tell them they couldn't have it, but all the kids got what they wanted. So just anecdotal, but it did happen.

[...] Women are art, men action. For example, here, men are training, women are texting or in a snow lodge, similar to gender binaries in toy marketing. [...]

Parents should not feed their kids fast food in the first place... Now that's worth a moral crusade.

Random, but Bosco is a Beauceron, not a Doberman or a Rottweiler. Lightning is a Minature Pinscher.

Just got meals for my kids here in Canada and Burger King still asks if the toy is for a girl or boy instead of just offering a choice of toys without mentioning gender.

So stupid. Burger King needs to get with the times.