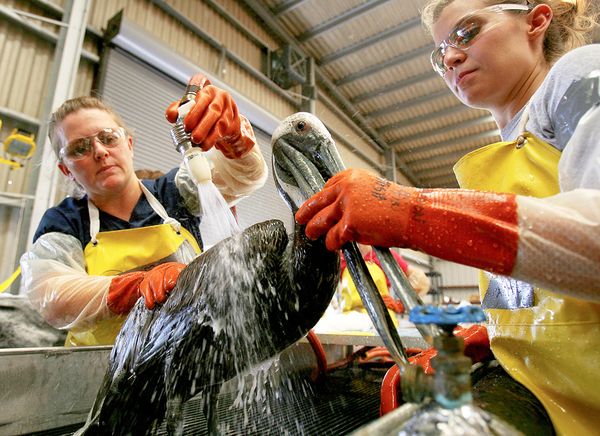 The image above, of a bird rescued from the gulf and cleaned of oil, may ease the ache in our hearts, but research suggests that euthanizing the birds would be more humane.

Catching and cleaning oil-soaked birds oftentimes leads to fatal amounts of stress for the animals… Furthermore, forcing the birds to ingest coal solutions — or Pepto Bismol, as animal-rescue workers are doing along the Gulf Coast — in an attempt to prevent the poisonous effects of the oil is ineffective… The birds will eventually perish anyway from kidney and liver damage (paraphrased at Speigel).

Further, birds who are relocated are often so disoriented that they die anyway, not able to re-establish survival routines in their new environment.

Gaus claims that 99% of the rescued and cleaned birds will die, usually within about seven days, and it will be a more painful death that takes longer than if they’d just been left alone.  As a consequence, many recommend quick and painless euthanization.  A National Geographic article complicates the story, reporting that survival rates depend on characteristics of the spill, but still reports that scientists largely have little hope that many birds rescued from the Gulf will survive.  A better strategy for saving birds, they say, is trying to keep them out of the oil in the first place.

The obvious answer is that it is good for BP’s public relations.  We feel better when we see the shiny oil-free feathers; those images make us feel like there is hope for the animals caught in the spill.  It makes it look as if BP is really doing something good.  In this case, why would BP care if the de-oiling worked?  They benefit whether the birds die (a slower, more painful) death or not.  It costs about $700 to clean an oiled pelican, but that may be money well spent.

There may be an even more nefarious reason.  There are fines and penalties for killing wildlife that can be levied against corporations.  The Migratory Bird Treaty Act of 1918, for example, specifies that corporations can be fined up to $500,000 if responsible for the death of a brown pelican.  Perhaps if the bird dies after release, without direct evidence that its death was caused by oil ingestion (without an expensive autopsy), then BP will not be vulnerable to those fines.  Further, the total number of dead birds attributed to their spill be lower; those numbers, instead, will be in the column marked “saved.”

UPDATE: Jay Holcomb at the International Bird Rescue Research Center disagrees with Gaus and other pessimistic scientists.  (Thanks to Paul for the link.)  It may also be that techniques for cleaning the birds have improved over time.  So the 1% number is probably wrong, or at least needs to be qualified.  Still, I think BP’s interests still apply, but it’s overstating it to say that de-oiling is bad for birds.  Thanks to everyone in the comments who added contrasting information!

I think that the 1% that survive is worth the cleaning.

Also, be aware that many of the affected species are endangered -- every single individual counts, genetically. So even if only a percentage is saved, it is worth it for the species -- these are not abundant!

Survival rate also depends highly on the species of the bird; some are just hardier than others. Penguins, for example, are much more likely to survive and go on to breed after being cleaned.

A different opinion from the International Bird Rescue Research Center

Why is it so easy to kill animals to be humane, but killing someone with terminal cancer is bad what a double standard. I remember bringing an injured bird to a wildlife society and because his wing was broken they killed it they didn't even try my question was what am I to tell it's mate birds mate for life an she stayed around my house for a month waiting
Why is 1% chance on a 1oz crack baby better then 1% for a brown pelican?

I agree with Lynne above, Gaus is oversimplifying. I think this is a case of bad science reporting. This is the sort of thing that becomes "newsworthy" because it's something novel and contrary to conventional wisdom. Well, sometimes conventional wisdom is correct.

Mark Russell, a project manager at the IBRRC, took strong issue with Gaus' claim that cleaning is ineffective: He told me that the studies on which she based her conclusions suffered from some gaps in procedure. (For example, what were the rehabilitation practices? Did the monitoring equipment that was strapped onto the released birds contribute to their demise? If you can no longer locate a bird with a transmitter, should you always assume that the bird died?)

Other studies indicate that the survival rate for cleaned-up birds can be quite high, from 78 to 100 percent, as noted on the "Living the Scientific Life" blog. And as bad as those oily pelicans may look in the pictures from Louisiana, Russell said it's often the oiliest birds that have the highest survival rate. That's because they tend to be picked up earlier, before dehydration, hypothermia and other ills have set in.

Russell said there was once a long-running debate over whether the stress of rehabilitation does the birds more harm than good. (Research shows that it doesn't.)

Gaus claims that 99% of the rescued and cleaned birds will die, usually within about seven days.

A group of us adopted 7-10 pelicans and they are doing just fine a month after being cleaned and rehabbed.

This is a South African group who (amongst other things) cleans oiled birds, mostly penguins. They have a very good survival rate with penguins (there are tons of news stories about the releases of cleaned birds when there are incidents) but I don't know about the other birds.

The obvious answer is that it is good for BP’s public relations.

Something else pricked up my ears in news stories about cleaning birds: the the brand name of the detergent. Dawn. I heard it in several news stories via radio. If a brand is named, it's always Dawn.

It makes me wonder if there are chemical properties of Dawn detergent that that make it uniquely suited to cleaning crude oil off wildlife. A quick Internet search unearths nothing special about Dawn, but I did see that Procter & Gamble announced (which announcement was picked up by several media outlets) that it shipped a bunch of bottles of Dawn to help the Gulf cleanup recently.

So: Dawn has captured the PR niche of oil-spill disaster recovery for wildlife, which is immensely important for campaigns like this: http://www.youtube.com/watch?v=GGcZrqP4f98 (Dawn commercial featuring cute clean animals and folky ukulele music)

I imagine the recent announcement, even if it turns out to be an overreaction, damages the feel-good vibe P&G is trying to establish for its brand as well.

You also have to take into account all the good PR that Dawn dish soap is getting, as they are apparently what they're using to clean all those birds. I got a whole speech from my mom last week that if I was going to buy soap, I had to buy Dawn, because look how much good they're doing in the Gulf. So clearly Dawn is making a good name for themselves on this.

I'm sure that PR has something to do with it, but there's also the fact that most people would simply rather clean the birds than kill them, no matter how many times you try to explain the pain and suffering to them.

This is why "kill shelters" get such a bad rap so often - people are aghast that a place could kill innocent puppies and kitties! That's just awful! Why look at these other no-kill shelters, they don't have to kill anything and they do just fine!

These people are ignoring, of course, the fact that no-kill (also called "closed admission") shelters are usually at capacity and turn down (or put on a waiting list) most of the animals people try to surrender to them. Those animals usually either end up at a kill (or "open admission") shelter anyhow, or die a painful death out on the street because many people actually think that releasing them is better than risking euthanization at an open-admission shelter. (Side note: This dichotomy is fading away anyhow as many modern shelters use various techniques to become "low-kill" mixtures of the two, but the stigma remains.)

The same applies here. As long as people see that 1%, they feel like they're giving that pelican a fighting chance, even if they're really dooming it to a worse fate.

Right on Lynne. I find it disgusting that people would put themselves in a position of superiority to judge who is fit to live and who is fit to die like this.

It's Spiegel (German for "Mirror"), not Speigel...

[...] Keep at it with the oiled-bird cleanup and support for it despite those who promote their own ethics through junk science. (Not to mention the poster and commenters who argue for bird euthanasia because clean birds make [...]

this is a very reasonable argument i am sure P.E.T.A will be fine with it...

BP isn't doing most of the bird rehabilitation. The Audubon Society (Which is leading most of the bird clean up I believe) wouldn't do i if they didn't think it was worth it. I don't like articles like this because they are in the vein of knee jerk lefty conspiracy theories, the whole idea that you can simplify everything as being secretly evil. At any rate, I agree all that BP does and all that NGOs and the Government do should be watched and critiqued. So perhaps the idea of this article could have been changed a bit.

As a former certified veterinary nurse and wildlife rehabilitator (currently working as a Ranger) I wish the news stories and general public would stop speaking as though the oil spill is stricly a human tragedy. The wildlife are not being given enough press.

Euthanasia is not always quick and easy. Birds do not have very accessible veins and the euthanasia drugs were designed for cats and dogs. It's not an easy choice, but let's face it, we only get one life. Then consider that greedy Americans will most likely continue using oil for many years at least, and there will be many more spills. How many pelagic birds do you think there are on the planet? They have intrinsic value and are needed by the ecosystem. We need to do all we can.

There's also some scientists who argue that the tracking of rehabilitated birds is not adequate (leg-banded critters are hard to follow). The number is most likely grim, but maybe there's some hope it's not as low as we think as veterinary medicine advances.

Did you know the Exxon spill is still killing sea otters and pigeon guillemots, 21 years later? Now we're all rambling about boycotting BP, and using solar and wind. First of all, Ken Salazar and the MMS are partly to blame for this. Salazar needs to be replaced, and we all need to realize our greed is just going to make us slaves to some other form of energy which can still damage the environment. It's time for all of us to do some serious reflecting, support each other in a new, more modern and more simple way of life. Can we, please?

"pessimistic scientists"--another stereotype, folks! Looks more like bad science reporting, not the scientists themselves. There is a difference.