Sabriel let us know about a story at Gawker about the repeated use of nearly identical covers for Men’s Health. For instance, here are the “Six-Pack Abs!” covers from December 2006, April 2007, March 2006, and April 2008 (it was used a couple of other times, too): 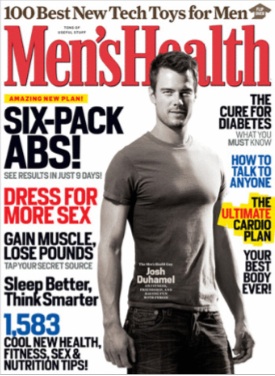 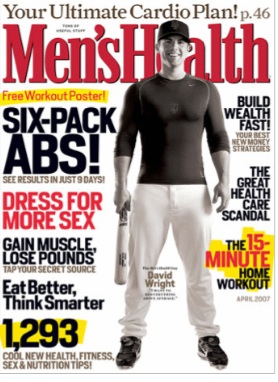 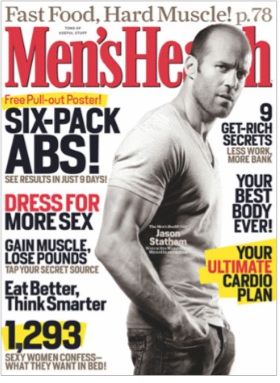 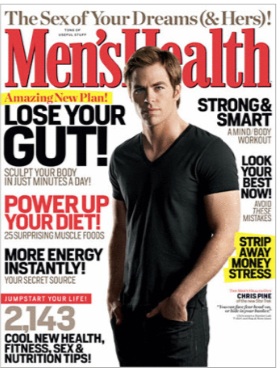 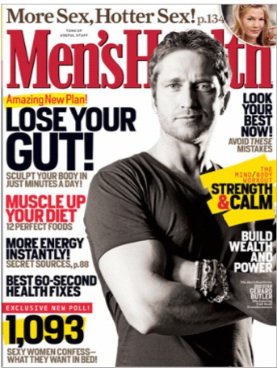 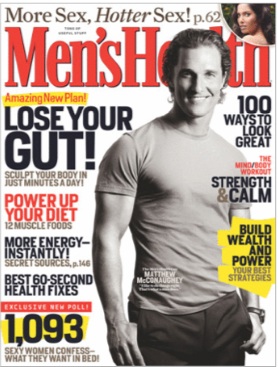 The editor responded by saying that the reused covers are only on the newsstand editions; subscribers get different versions, though even then, there’s quite a bit of repeating.

But regardless, I’m not interested in the fact that a magazine was recycling covers per se. I was struck by two things. First, the repeated covers make clear how much men’s midsections have become objects of scrutiny, the area to work on and obsess about, and by which your physique is judged. From Gawker:

Second, the degree to which cover lines can be reused, and content is interchangeable, underscores the degree to which these types of magazines — whether aimed at men or women — are selling us the same story, month after month. That story is: you aren’t good enough, your body isn’t good enough, but we have the secret to fixing it (lose weight, gain muscle), getting great sex (or, in the case of women, pleasing your guy), and improving your life in other ways (men = make more money, women = deal with a difficult coworker). The magazines are selling you slightly modified versions of that story because that story is what advertisers want you to get.

This might be a particularly literal repackaging of that theme, but other fashion/health/exercise/gossip magazines are doing the same thing in a somewhat more subtle form.

Back in '95, I was in college and my dad was stationed in Korea. I'd put together care packages every 6-8 weeks and would always include a copy of Men's Health. He pointed out the recycling of articles after a few packages; he called my mom and asked, "Why is our daughter so concerned about my prostate?!" Apparently *every* issue I'd sent had a large article on the topic.

One of the funniest things I encountered recently regarding Men's Health is their published volume of exercises, "Men's Health Big Book of Exercises." They publish a women's version, too, and besides the images, the only differences seem to be that the women's version uses the word "sculpt" and the men's version uses "build." I would be surprised if the magazines didn't share content as well, just changing the headlines.

Hm, it's not just "get good sex" but "what women want in bed"... that's slightly encouraging.

Aslo, Men's Health appears to have a uniform for its cover models....

There's another thing about six-pack abs: not everyone's ab muscles actually form a 6-pack. Some people's abs form an 8-pack, or have an unequal number of subdivisions on each side. The ideal of the 6-pack is not attainable by everyone, even assuming the ability to build the kind of tone you would need to tell what kind of abs you have.

Well, gay culture is subdivided into subcultures/markets like any other. Men's Health appeals mostly to bottoms, who in fact very much want to be told how to get six pack abs. They work at it all the time. If you were reading magazines aimed at the bear subculture, you would see an entirely different set of norms presented, albeit every bit as normative.

You seem continually surprised/shocked/outraged that such norms exist, and are propogated through the media, and they correspond to different subucultures in our society. I should think a sociologist would expect this, not be constantly offended by it.

The magazines are selling you slightly modified versions of that story because that story is what advertisers want you to get.

I agree with the rest of the post, but this is an extremely strong claim about the economics of magazine publication! Do you have any evidence for it that tends to exclude alternative hypotheses?

Here's one: men mostly get their ideas about what constitutes an attractive male body from sources other than "health" and "fitness" magazines aimed at men. Men's Health keeps writing the same article and reproducing the same cover design because men have absorbed the thin-and-firm waistline message from other sources. Advertisers choose to advertise in Men's Health because they want to target men who are interested in a thinner waistline.

Would Men's Health sell as many magazines if they wrote articles about how to lower your cholesterol level and lower the risk of heart attack? Are there no advertisers who would be interested in promoting the low-cholesterol, no-heart-attack message?

This hypothesis doesn't deny that magazines like Men's Health have an impact on male appearance norms and cultural ideas about what "health" is: by trying to appeal to men's desire for a thinner waistline, the magazines end up perpetuating the thin-waistline norm.

Of course, it's entirely possible that Men's Health is picking the thin-waistline stories rather than the low-cholesterol stories because that's what the advertisers want rather than because that's what sells magazines, but you haven't provided any evidence for your hypothesis, which strikes me as extremely implausible. Of course, the hypotheses aren't mutually exclusive, but you've pretty clearly decided that one of them is much more important. What's your evidence.

I was struck by the juxtaposition of 'Lose your gut!' in big letters next to the celebrities on the cover. It may be just me, but I read it as an exhortation to the celebs to lose their guts - and given that they're all straight up and down, it seems to be asking them to go concave.

The training tips in Mean's Health and co are deliciously ironic. If they worked, there would be no need for constant repetitions of strange training programs.

Even the magazins title is misleading, branding a six-pack as a health issue and not a fashion issue. Unfortunatly, the six-pack is a phenomenon that requires unhealthily low levels of body fat. In addition, for many humans it is unattainable due to their genetic dispositions.

A product that fulfills a need permanently makes no economic sense. A product that fulfills needs temporarily is far better.
But the best product are those that are believed to fulfill needs that have been fabricated and can in fact not be fulfilled. After all, once you have a flat stomach, you need a six-pack. Once you have a six-pack you need an eight-pack. And if thats achieved, there are all other body parts, skin issues, your hair, your nails, yor breath and so on.

My approach currently is to achieve a body that can easily cope with every day tasks and for the rest I try to build my self-esteem instead of my body.

I used to subscribe to Oxygen fitness magazine for women, then I realized that if you have a complete year's worth of issues that there's no need to buy more because they recycle and repackage the content over and over and over and over.
The main stories there are Losing Fat, Working Glutes and Getting Tight Abs

You're making two assumptions that I think are unwarranted.

First, you're assuming that it's the same readership from year to year. There's no problem with repetition if you have a high readership turnover. Look at the extreme cases - magazines targeting brides or first-time parents. Would anyone see any problems with them recycling articles every few months? Of course not, most of the readership would have either moved on or would be focusing on a different set of articles.

Second, you're assuming that there's no value in repeating articles as reminders. Again, look at the extreme cases - the year-end financial planning articles, the late winter tax preparation articles, the articles on how to help your kid apply to college (and financial aid!), etc. There is a bit of seasonality to fitness, e.g., how to prepare for winter sports (or social expectations at the beach), but a lot of it is just a reminder.

BTW Runner's World also has a lot of repetition. But again there's a lot of turnover (people starting to run recreationally) and seasonality (many people have an easy winter and run progressively longer races during the warm months). Why wasn't it mentioned as an example of reselling the same story?

In all of these cases there's a lot of new material that just isn't mentioned on the cover. Columnists, healthy recipes, interviews, product (or fashion) reviews, etc.

I think a lot of this reaction is because of our own expectation that fitness magazines will be shallow and the readers a bit challenged. I don't think either is true, although I will admit that the only fitness magazine I consistently read is the one targetting personal trainer, not the ones you can find in the airport magazine store.

The Problem With Your Information Sources and How To Fix It | Superhuman Pursuits — March 5, 2012

[...] If you start to pay attention, you’ll see that much of this information is just rehashed. Throw a new headline on it, put up some fresh photos and spin the content a bit. These mediums are motivated by readership and viewership. That’s what pays the bills. Even if they value quality information, if there is nothing new to put out there, they still have to hit there deadlines. Don’t believe it, take a look. [...]

Republishing Content Isn’t the Danger You Think It Is — January 25, 2018

[…] few years ago, someone noticed that Men’s Health magazine has a habit of repeating the messages on their covers. They do it because messages like “Lose the Gut” and “Six Pack Abs” are perennial sellers. […]

[…] For example, when going over travel, the magazine opts to get exotic and expensive instead offering a variety of options from budget trips to lavish experiences. It’s the same with the accessories and fashion that they cover. Naturally, this is done because the magazine has an audience profile in mind and there’s nothing wrong with this – this is how you’re meant to cater to an audience, by identifying your target market – but the only problem with a target market is that there is a finite number of topics you can possibly cover for a single target audience and this reality is exacerbated when your publication is monthly: what are you going to tackle next after 10 years and over 100 publications? Mind you, Men’s Health has been around for over 30 years … it’s no surprise it’s been accused of repeating content (see here and here). […]