Oh my. Inés V. just let us know about a contest on WTVN, a conservative talk radio station in Ohio (reader Scapino clarifies that the conservative tone is mostly due to syndication of Glenn Beck and Rush Limbaugh, not really the local DJs). Just…see for yourself: 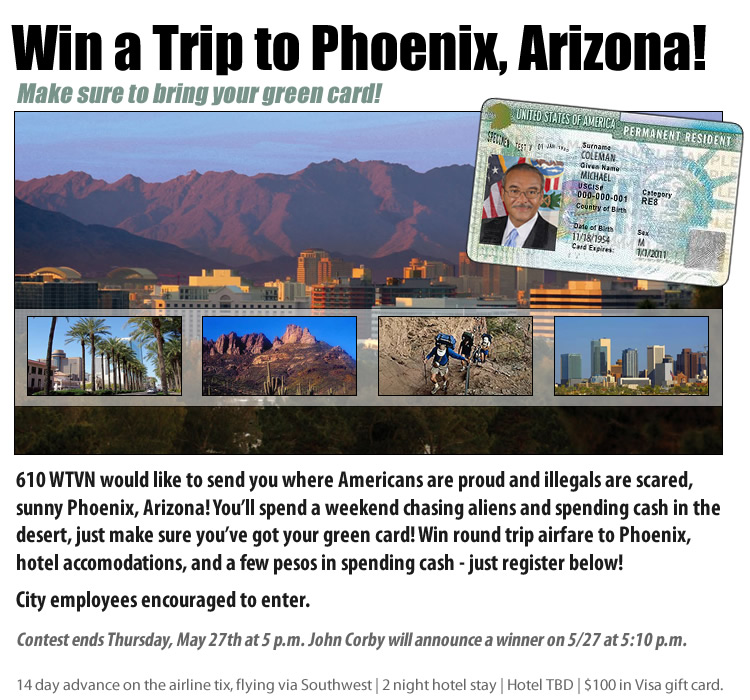 This campaign is a response to Columbus mayor Michael Coleman who boycotted AZ by banning all city-funded travel after SB1070, and the mayor is depicted as a holder of a green card [that’s him shown on the ID card].

It’s an astounding example of dehumanizing undocumented immigrants — being a proud American is linked to “illegals” (a term that somehow seems more stigmatizing than terms like “illegal immigrants” or “illegal aliens,” even — a linguistic erasure of personhood altogether) being scared, presumably of all the proud Americans they encounter, and the lucky winner gets to go “spend a weekend chasing aliens”. It’s like you’re getting to go on a safari.

Groups in Columbus have organized a response and will be delivering letters to the station this afternoon, before the contest ends, in protest.

I’d add more commentary, but what can you really say?

And you can add your condemnation online @ http://www.thepetitionsite.com/1/wtvn-mocks-mayor-immigrants

This station is owned by Clear Channel; I'm very surprised that they let this go through on a station-sponsored level, that seems like it'd set off alarms in the management.

The "conservative" nature of the station comes more from the syndicated stuff (Rush, Glenn, and Hannity) than the local guys, who tend to just let callers screw around on the air and aren't as overtly political. Kind of sad that the (mostly harmless) local stuff has been so tainted by the syndicated conservative talk stuff.

Well, for one thing I'd say it would be mighty strange for a native-born citizen such as Coleman (and presumably the people they're targeting with the contest) to have a U.S. green card. I see that Coleman is the first African-American mayor of Columbus--I wonder if there's a bit of birther mentality behind this? Or does the station just have no clue what a green card is?

I'm listening to the radio show. Several points. The host obviously does not understand the 'why' of immigration--that there are jobs but no visas, that there are visa overstayers, that there are children whose parents brought them, that the process to "get legal" does not exist for most people.

He says it's not complicated--that you do it the right way or you don't.

Ewww, and right in my backyard. Be cool, Columbus. Quit this nonsense!

ugh... just how offensive can you get? he's basically organizing hunting safaris, but with humans as prey :-/

My first thought upon seeing the RSS feed title was "Aliens? I'd love to go chase aliens in the desert!" But... I had been envisioning some sort of UFO-themed camping trip. (I've been watching a lot of X-Files lately.)

This is just disgusting and and offensive and disturbing. I wish I'd been right the first time.

All for it. No green card, no legal status, go the hell home......I am not responsible for what the parents did, so if you dragged your infant here and it is now grown, take it back...

The radio has refused to let representatives of the Ohio Chapter of Reform Immigration for America deliver 400+ letters of condemnation. Information about the contest is nowhere to be found (except that now the link says it 'has expired.' This is really disturbing. Activists will return tomorrow with news cameras at 1.30pm Join if you are in town! (The address is 2323 W. 5th Ave. Columbus OH)

How do you turn off flash banners without turning off your flash player? — May 27, 2010

This issue is very tragic. I got involved in an online debate with someone who simply took the position that illegal aliens (as they used to be known) are breaking the law, and should be deported en masse. When I pointed that the companies who hired illegals when good methods to check social security numbers on the fly exist, he grudging admitted the companies should obey the la, but wanted to maintain that the real villains are the undocumented workers.

To add to the complexity of the situation, there was another commenter who was a foreigner, had come here on a work visa sponsored by a US company, spent maybe eight or so years total and thousands of his own and his company's dollars to become a citizen. True to what I have been reading, he thinks the Arizona law is dandy. But the irony is that even though he does not acknowledge it, his story also indicates how difficult it is to immigrate legally to the US these days. The companies that sponsor foreign workers first need to make a "good faith" effort to advertise the job to American workers, a lawsuit waiting to happen. Then you have to spend years working before you can become a citizen. Any legal mistake you might make, or if your company terminates you, I assume would sabotage that effort, and presumably force you to at best start over.

What we need to understand is that there is a labor market for illegal aliens or undocumented workers or whatever. American companies want workers who can not complain about working conditions (or even pay), who can be easily fired and replaced. There work in poultry processing plants and slaughter houses, in overnight office cleaning companies, for building contractors as roofers or other workers, and as migrant farm workers (probably other places too). Because we want cheap chicken and hamburger, cheap oranges, cheapish roofs and good corporate profits, we actually want illegals here.

Understand, if there was a large public outcry against the people and companies that hire illegals, that might spur action to clean up the American companies. If that happened, the incentive to come here would disappear, and so would the illegals. But we don't want to solve the problem, we want cheap stuff and a public whipping boy. In this case, Republicans want to be able to blame the Democrats (particularly Obama) for not solving the problem.

I think that cracking down on the US companies, along with a guest worker program is the way to go. If we forced the US companies to verify the status of their employees, the illegals would end up going home of their own accord. Then they could apply legally to come back as guest workers. No harm, no foul.

As a resident of Phoenix, I have to say that anyone who enters a contest to visit here in the summer is already an idiot, politics aside.

Anyone who comes here with the intent of 'hunting' illegals is going to be in for a surprise when he/she discovers that there are a lot of 'brown' people here that are neither undocumented nor particularly indulgent of racist profiling by some dumb ass touron. That visitor might also be surprised to discover that not every white person in Arizona is a right wing nut and they won't be welcomed by a lot of 'us white folks' either. We have enough crazies without importing 'them' from the midwest. For all of the talk of undocumented aliens, it's really the ideologues with a gun that are the truly scary ones.

The entities that really win out are all of the hotels that are desperate for bookings in the hottest part of the summer. This is an enormous boondoggle for them.