Cultural Difference, Color, and the Onion

At BoingBoing, German professor Michael Shaughnessy offered his insights regarding how Americans and Germans see and talk about color differently.  Among other things, he noted how few foods in the U.S. are described as blue.  Blueberries, of course.  And blue cheese, I suppose.  (Or “bleu” cheese, as TheophileEscargot points out.)  But little or nothing else. 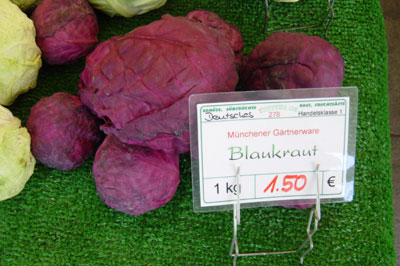 In northern Germany, however, “Blaukraut” is “Rotkohl.”  That is, the same color (“blau”) is described as red “(“rot”).  He ponders whether “red onions [in the U.S.] are truly red.” In fact, their better described as purple.

He continues, “Words, impacted by the visual, often vary at the crossroads between colors.”  In other words, perception may be influenced by language and culture.  Where does blue end and red begin?

UPDATE: In the comments Alissa notes:

German wikipedia tells me that the south/north naming difference results from the difference in prepararation of the food. in northern germany it is usually prepared with acidic substances like vinegar giving it a more reddisch color, thus “Rotkraut” (very good with apples), in southern germany sugar or natron is the ingredient of choice, which enhances the blue of the original purple color, hence “Blaukraut”.

I would call all of the above "purple".
Which comes between blue and red, or I suppose, could be described as being simultaneously both blue and red - particularly since clearly these colours are variously described as either...
I don't quite know what my point was meant to be anymore.
I wonder why no one describes these thigns as purple?

xkcd recently did a (remarkably formal) informal study of how people perceive color. The results are interesting: http://blog.xkcd.com/2010/05/03/color-survey-results/

I was surprised when I found Americans sometimes talk about "bleu cheese" (rather than "blue cheese" or "fromage bleu"). Wonder if for some reason they're reluctant to accept the colour blue in food.

I've lived in north and middle Germany and only know that cabbage as "Rotkohl". Quite pretty and a bit darker in colour than beets, which are also referred to as red (Rote Beete).

hi, german checking in! it's not "Rothokl", but "Rotkohl" which is the actual vegetable's name. German wikipedia tells me that the south/north naming difference results from the difference in prepararation of the food. in northern germany it is usually prepared with acidic substances like vinegar giving it a more reddisch color, thus "Rotkraut" (very good with apples), in southern germany sugar or natron is the ingredient of choice, which enhances the blue of the original purple color, hence "Blaukraut".
I have never heard onions be referred to as blue, they're red here too (maybe it's a regional thing but google gives >42,000 hits for "rote zwiebeln" and <1,000 hits for "blaue zwiebeln".

Let's not forget the blue potato and blue corn, which are both popular in the US.

I once read that science fiction uses blue frequently for food and drink (think Star Trek and Star Wars) because there are so few truly blue (vs shades of purple) foods that people eat.

An interior designer once told me that painting a room blue is supposed to remind remind people of oxygen, and so it's a safe colour for kitchens. Green and brown are to be avoided, by reason of contrabalance's comment above. This opinion puzzled me, given the number of non-moldy green and brown foods.

What about blue raspberry? This completely artificial flavor (and concept) has always fascinated me.

Reminded me of this: http://www.youtube.com/watch?v=l04dn8Msm-Y (George Carlin: Where's the blue food?)

I'd guess something about when/how the color and word purple entered German (and other Germanic languages, such as English). If it wasn't really a color category until relatively recently, then those things we would now call purple had to be called something else.

My (North) German SO says they have Purpur, Lila & Violett, all of which are different shades, but no overarching "purple" category, and the color of the cabbage above would still be red while the onion is Lila.

To me they're both clearly purple, though called "red".

Why are you all wasting your time talking about blue and red and purple and onions! Get a life!

oops, wrong thread!
(wonder why it is only posts addressing gender issues that get concern trolls?)

In Japanese, things most Americans would call "green" ("midori" in Japanese) are often called "blue" ("aoi") (such as the green light on traffic lights--here it's the "blue light"). There are several examples of this in food: for example, "aoringo" ("blue apples" = green apples) and "aonori" ("blue seaweed," which looks pretty green to me).

The Irish for "black" is "dubh", but the translation of "black man" is not "fear dubh" but "fear gorm" - blue man.

Irish also has different words for red, depending on whether it's a thing (dearg) or hair (rua).

A historical culinary wonk, of course I had to look up 'natron'. It took a few Googles before I realized that it was just a 4:1 mix of Sodium Bicarbonate and table salt. Now I will have to try that when making 'kraut with "red" cabbage...

[...] series of blogs feature a wealth of interesting topics; for instance, who knew that a discussion of onions in Germany could be so fascinating? And the Graphic Sociology blog jumps in to dissect a graphic that shows [...]

[...] extremely rare.  The flowers we think of as blue, for example, are usually more violet than blue; very few foods are blue.  Most of the blue we see today is part of artificial colors produced by humans through [...]

The coloring in red cabbage is from anthocyanins which are a pH indicator dye: they change color just like litmus paper. If they're basic, they turn blue; acidic, they turn red.

[…] other examples of this phenomenon. What we call “red onions” in the U.S., for another example, are seen as blue in parts of Germany. Likewise, optical illusions that consistently trick people in some cultures — such as the […]