Why Are Insured Women Paying for Abortions?

Dmitriy T.M. alerted us to a new report by the Guttmacher Institute on the characteristics of women who have abortions.  There’s lots of interesting data there, including the figure below that tells us how women are paying for their abortions. 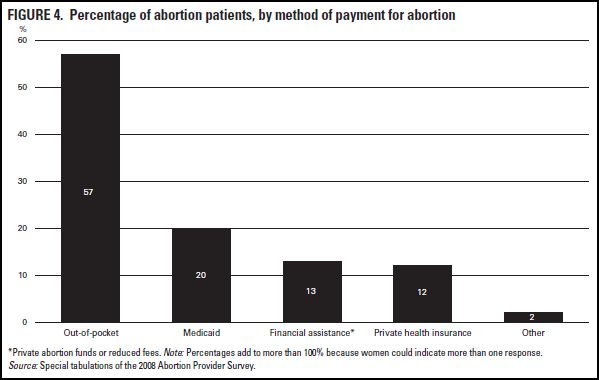 According to the study, 33% of the women in their study were uninsured, but 57% of them paid for their abortions out-of-pocket.  Why?

I was able to track down two reasons.   First, medicaid only covers abortions in the cases of rape and incest or if a woman might die if she proceeds with the pregnancy.  Second, according to another report by Guttmacher, 15 states deny or restrict the coverage of private insurance companies or the insurance plans of employees of the state: 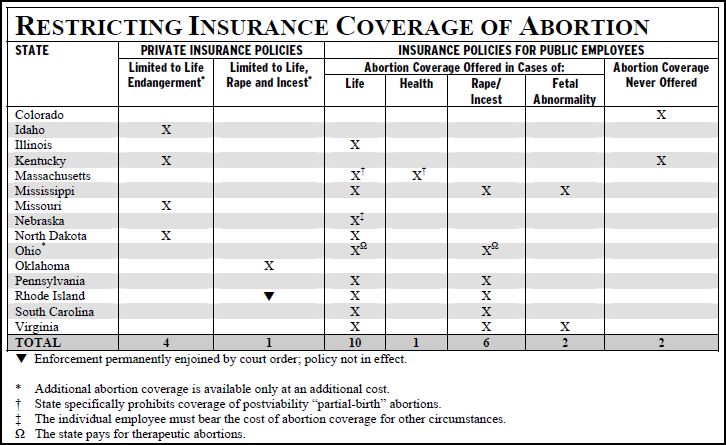 The fact that non-therapeutic abortion is not covered by medicaid and by some private insurers, of course, hurts poor women and their families the most.  While middle and upper class women can always find the money to make up for the gap in their insurance, poor women may not be able to do so.

I had insurance (Care Choices) for a while, and they are a catholic organization - they wouldn't cover birth control, so i highly doubt they would have covered abortions.

Religious-based health insurance companies are another reason i'm sure.

The really interesting thing is that, in an unregulated insurance market, abortion would almost certainly be covered for good actuarial reasions. Abortions are much cheaper to cover than childbirth, and children.

Thanks so much for drawing attention to this important study, Lisa. As to why women who do have insurance would neglect to use it for an abortion, according to Rachel Jones from the Guttmacher Insitute in an interview on Reality Cast yesterday, there are a few possible reasons, ultimately stemming from abortion's stigma: fear that a household member (a parent, a spouse) or employer would see the claim, or lack of knowledge that the policy covers abortion. Interestingly, prior to health care reform 5 states restricted private insurance coverage of abortion. Now 7 states do, and lawmakers in 29 states are considering similar measures.

As to your point about who has access to abortion, it is true that the burden falls largely upon poor women. However, middle class women often have difficulty paying for an abortion as well: in states like Minnesota for example, where state Medicaid does cover abortion, the Hersey Abortion Assistance Fund the needs far outpace the resources. For the working class, for college students, for the waitress working the late shift who makes just enough for rent and childcare but not so little that she qualifies for Medicaid, the $500 it costs for an early abortion is not an insignificant sum, much less the thousands that a later or more complicated procedure can cost.

Louisiana is about to be added to that list. They just approved legislation prohibiting insurance coverage of abortion (even for private insurers) -- including in cases of rape, incest, and when the fetus has a condition that's incompatible with life. The only exceptions are saving the mother's life -- of course, her health or future fertility are not considered important enough to make an exception for -- or if the fetus has already died in utero.

Just to add to this, FL is not on the list, but it recently decided, without putting it up for public comment, nor vetting it through any legislative committee, that women must pay for an ultrasound out-of-pocket even in the 1st trimester (1st trimester is what's new about this, FL's had this law for 2nd and 3rd) before she's allowed to proceed with having an abortion. Insurance companies are not to cover this ultrasound. Now, doesn't that make it prohibitive for poor women to even have the luxury of a choice? And furthermore, this ultrasound is not to check on the wellbeings of the mother nor embryo - it's not medically necessary. It simply exists to deter women from choosing abortion.

It's HB 1143 if anyone's interested in looking further into it on their own.

When abortion coverage is allowed if the pregnancy results from rape, what level of evidence of "rape" is required? Is the woman's report sufficient (it should be), or is some other sort of corroboration (4 male witnesses- ha!) required?

As a song goes:

Both mother and daughter
Workin' for the Yankee dollar

Joking aside, there simply is no social justice. I mean, what if someone cannot simply afford an abortion, what will she do? Rob a bank? Do it herself? Have a baby because SHE DOES NOT HAVE ENOUGH MONEY NOT TO?! The situation is mighty queer.

I may be able to add a little insight to this discussion. I had an abortion in 2006. At first I didn't even consider that my insurance may cover an abortion. I thought it seems to be an entirely elective procedure (in my circumstances), and insurances didn't cover electives.

I eventually did find out my insurance covered it, so I went to their website to find a provider in my area. There was no way to even search for an abortion provider. I called my insurance company, admitted to them that I was having an abortion (or at least, that someone in my family was getting one, and my husband was the only other person on the insurance).

So, I talk to my insurance company, and they couldn't even search for it! All they had was Ob/gyns. I had to have the abortion done and then request reimbursement.

I doubt my experience was unusually. I have had other insurances since, and none of them allow you to search by abortion providers on their website.

So, not only would a lot of people assume their insurance would not cover an abortion, they also would have difficulty finding a provider.

When I had my abortion, I paid out of pocket, even though I found out my insurance did cover it. I hadn't realized it at the time, and just assumed they wouldn't pay for it. Even if I had, I would have had to get a referral from my primary care physician, which is something I wouldn't have felt entirely comfortable doing.

I think my insurance covers abortion (it covers birth control at least), but I'd try to scrape up the cash on my own. Less of a paper trail.

Why the hell would insurance companies pay for abortions (outside of rape, incest, and medical necessity)? It's a completely elective procedure. If they cover abortions, why not unnecessary plastic surgeries?

When I had an abortion I decided to have it an abortion clinic and pay out of pocket rather than deal with Kaiser (my HMO at the time). And it wasn't only because I didn't want to face the hassle of dealing with bureaucratic Kaiser. It had to do with me wanting to be in an environment that was woman friendly, believed it was my obligation to control my own body and reproduction, and that I would be dealing with an organization that wanted to make sure that every woman had that opportunity. I know a lot of people might understand this or shudder, but for me, an abortion was a political act as much as it was an individual act for self preservation.

I support the legality of abortion because I think the correct moral perspective on the subject can't be objectively determined. People on both sides have good arguments about why it's moral or immoral to allow abortions. However, I think it would be unethical to use tax money (medicaid) collected from people who believe abortion is equivalent to killing babies to pay for it. In that case you're asking people to either violate their beliefs, particularly religious beliefs, or not pay their taxes. That would be outrageous.

As for private insurance companies, I agree with the surprisingly libertarian bent of the comments here that private companies should be allowed to do what they want. I bet there would be plenty of room in the market for an insurance company that promised not to pay for abortions, as well as companies that would pay for it.

I had an experience similiar to Rachel's, in that though it was covered by insurance, they did everything they could to make it difficult to obtain.

when I found out I was pregnant in 2005,the first thing I did was to see if my insurance covered abortion. It did. I then called my primary care doctor, who told me his office didn't perform them, I should check with the insurance. I called the number on my card, they told me to call ob/gyns in the medical group. I called my several, none performed them. I then called Planned Parenthood, who told me they did accept my insurance, that it would require some sort of exception or reimbursement from the insurer. When I called my insurance to obtain the waiver, suddenly they were willing to help me locate a provider within their network, but outside of my regular medical group. They commented that no one in my medical group performed them because it was associated with a Catholic hospital (even though my employer and insurance are not religion-based). Of course, they didn't bother to tell me that the first time I called. Instead, they gave me the run around, had me call several providers and let them tell me that they did not perform the procedure, some of whom were really condescending when they responded to my inquiry.

This all took place in Southern California and I have really, really good insurance. I can only imagine how difficult trying to get an abortion would be for a woman who lives in a state with more restrictive laws, in an area with limited access, or that who does not have experience or confidence to deal with medical insurance bureaucracy. Finding a facility to have the procedure performed was the most frustrating aspect of the entire experience. After the experience I had, I'm sure many women opt to go to Planned Parenthood or other similar services just to not have to deal with the insurance mess. The facility that I ended up going to and handing over my $10 copay was incredible - very caring, woman friendly environment. Juno did a real disservice to abortion providers with their portrayal.

Another lesson learned from that experience - I changed my medical group as soon as I was able. Now, when choosing medical groups through my insurance, I don't choose anything with Saint in the name, and I do my research to make sure they're not associated with a religious hospital system.

Sorry for the long post, I felt my experience echoed many of the other commenter's experiences.

I suspect that part of that is the same reason that I pay for my mental health consultations out of pocket - once the insurance company knows, it's a pre-existing condition, and I'd rather not have it on my record.

Wait, so states require insurance companies to cover some things, and restrict them from covering others? Wouldn't it be better for government to let insurance companies and consumers work out what a policy should cover, and to only intervene in cases of fraud on the part of one of the parties?

If it is inconsistent for insurance companies to cover prenatal care and not abortions. Then is it not inconsistent to cover birth control and not fertility treatments?

It would be informative to see this broken down by where one gets their insurance from. I suspect that women who have coverage through a parent or other family member, or through a small employer, would be less likely to go through insurance.