Who do Americans Prefer NOT to Have as Neighbors?

A recent study by Chelsea Schafer and Greg Shaw found that, as of 2006, over a quarter of Americans would still rather not live near homosexuals.  This percentage has been decreasing, however; in 1990 and 1995, 38% and 30% of people, respectively, wanted to keep their distance: 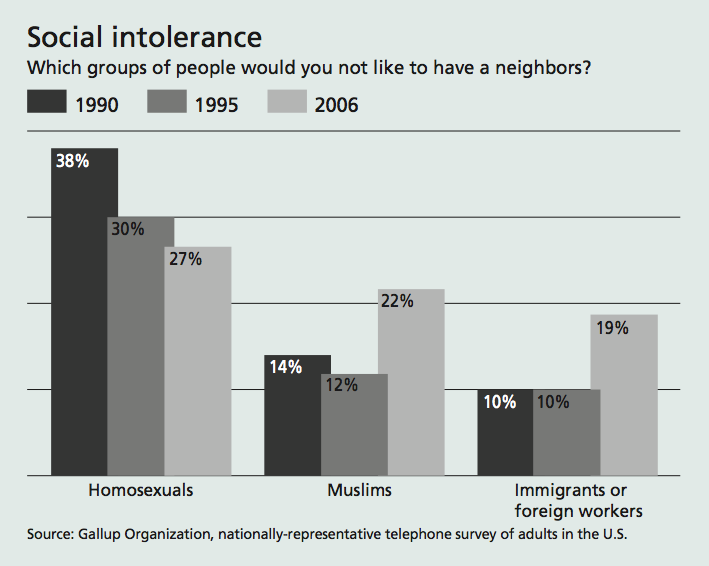 The data on tolerance for Muslims is likely due to the way the attacks on September 11th, 2001, have been spun to stoke hatred against Muslims.  What do you think about the increased intolerance for immigrants?  Have “foreigners” been collateral damage in the smear campaign against Muslims and Arabs?  If it were simply growing conservatism, wouldn’t we see the same pattern for homosexuals?  Other explanations?

I'm not a sociologist, but if I were going to posit a guess, I'd say increasingly militant conservatism is to blame. I disagree the increase in the tolerence of homosexuals as neighbors disproves that. I think the decrease comes primarily from liberals and moderates who were still homophobic 10+ years ago but have now realized the error of their ways.

Could increasing exposure to immigrants play a role? I don't have any idea what the numbers are like, but I know in my hometown in rural Ohio there were relatively few immigrants (heck, few people who weren't Ohio-born'n'bred) in the 1990's when I was growing up, but the population of first-generation Spanish-speaking immigrants has increased noticeably since then. If that is true for a lot of the country, it could play a role, especially if combined with an economic downturn (I don't know if that's relevant for the period in question) and rhetoric about the threat posed by illegal immigration and "job-stealing Mexicans."

Um, you're aware that immigration is an emormous political debate in this country, which has been growing more strident over the past decade, right? The debate is about "illegal immigration" but many people do not make the distinction between "immigrant" and "illegal immigrant" in their minds.

Faux News, the increase of crazed, right wing Christian fanatics and the surging popularity of angry white men who are given a national platform to express their racist, sexist, and homophobic views on TV.

I expect there's a bit of NIMBY-ism going on here, with people who are otherwise accepting of an immigrant's right to live in the country taking issue with, say, the smell of sauerkraut, or what they perceive as a large family, etc. Same phenomenon as people voting for sewage treatment plants, just not in THEIR neighborhood.

I think the general culture has become more accepting of gay people. There are many more of them on TV, in movies, they can get married in some places now, etc. Meanwhile, anti-Muslim backlash from 9-11 and the War on Terror have made (non-Muslim) people leery of Muslims, and all the anti-immigrant rhetoric of late has made people more anti-immigrant. I think it's a general cultural thing that people who are homophobic are generally pretty out there, at least in my neighborhood, but it's more mainstream to be afraid of Muslims and immigrants.

Also, it's harder to make a case that gay people are going to hurt you, whereas Muslims will blow you up and immigrants will take your job.

What about lesbian Muslims who have recently immigrated? I wonder what that percentage would be. I'm guessing pretty low.

I expected to see "Canadians" on there :)

This used to work with gays and lesbians, too, until Americans got a steady diet of sympathetic or at least funny television and movie characters, famous lesbian musicians that don't seem particularly weird or scary, Ellen (how many millions of stay-at-home dads, moms, and kids watch her on a daily basis?), Rosie, and on and on. There are no equivalents for Muslims or "immigrants" and "foreign workers." Puzzle solved.

The prejudice against "immigrants" and "foreign workers"? 99% sure that's garden variety racism under another name. Somehow I doubt these same people would have a fit about a British or French neighbor.

I wonder whether there is a concern over the percieved class status of homosexuals, and whether their stereotypical role as a gentrifying force has anything to do with the still large bias against them being one's neighbors?

Also, higher reports of fear of Muslims or Immigrants is sad but totally predictable. Frankly, it's a low figure, given how many trillions of dollars are spent attempting to demonize both of these figures in the media. I am impressed with the super-majority of people who haven't bought into these horrific lies or been swayed by literally every politician and newscaster.

People are realizing that their gay neighbors are often a lot like themselves, only gay. Immigrants and Muslims are a lot less "like" the majority groups in the US than gay people are in terms of their lifestyles and jobs and education and hobbies, because gay people come from all sectors of the population.

This poll screams "Social desirability bias" to me.

If I think of my actual neighbors, though, they wouldn't be "The Muslims" or "The Foreign Workers." They are complex people whom I either know personally, or know through behaviors I observe ("walks dog in afternoon"- "put up the No on Prop 8 window sign"). I think it's easier to categorically say you wouldn't want to live next to someone if all you know about them is a single classification, especially if that classification has been vilified in the media you consume.

The survey seems to force you to buy into stereotypes. Otherwise, one's answer to every question would be, "Well of course, it depends on the person." It's an assessment of stereotypes, rather than attitudes about individual people you know who fall into one of the categories. It would be interesting to see the intersection of this survey with the idea of exceptionalism: "When I answer, I'm not talking about Lila; I'm talking about those OTHER people I don't know."

I imagine the results would have been different if the question asked whether respondents would want to live next to "Deepa, who drives a Honda Accord, likes bicycling and photography, and grew up in India speaking Hindi" or "Mo, who was an architect before he retired, enjoys traveling, and attends the mosque on 10th St."

Islamophobia is the new antisemitism.

Personally, I'm tired of having only conservatives as neighbors. I was at the gym on the treadmill yesterday and the people on either side of me were watching Faux News on their Tvs. I feel so alone here. Id move in a heartbeat to friendlier territory if it were economically possible.

Is it only me, or does the heading of this post (and the study) conflate "Americans" with "white, heterosexual people?"
Isn't saying that "Americans" don't like living next to Muslims imply that Muslims are not/cannot be Americans?
And, isn't saying that "Americans" don't like living next to "homosexuals" imply that "Americans" are by default heterosexual?
Also, I am sure the not wanting to live next to immigrants/foreign workers has more to do with race than will legal/illegal immigration. I am certain that the same adults who were surveyed for this study and said they didn't want to live next to an immigrant would not mind living next to my white, blue-eyed, blonde German friend.

I know a lot of middle to upper middle class woman and they never seem to trust there husbands and always get furious when the husband is caught checking out a different woman. I have heard more than one complaint about a woman who lives near a few of my married friends. She is divorced and has a body that is kind of hard to not look at no matter your sex or sexuality. But I guess this beats living next to a homosexual couple. ???? This reminded me of the study noting the differences in people's approval / acceptance of how the sexual preference was worded. I see in the graph is says homosexual, which seemed to be less acceptable to the people in the study. I wonder if the survey takers used the word homosexual or something else.

I think the spike in the intolerance to immigrants is due to the recession. Less jobs, more immigrant hate - immigrant are taking our jobs. I thought it has often been the case and not only in America. Plus, of course, politicians have playing the Hispanic card recently.

Second, I wonder if the study asked the question if folks wanted to live next to "evangelical Christians". It would be interesting to see that "tolerance" of the Left on that question.

Someone else mentioned it, but it's worth repeating... did the survey actually use the word "homosexuals?" I know there was just recently a study showing how much more negatively that word is viewed than the word "gays." I suspect the graph would look very different if "gays and lesbians" had been used instead.