The Relationship Between the Unemployment Rate and Job Growth

So the number of jobs and the unemployment rate are not directly correlated.  Ezra Klein posted this visual: 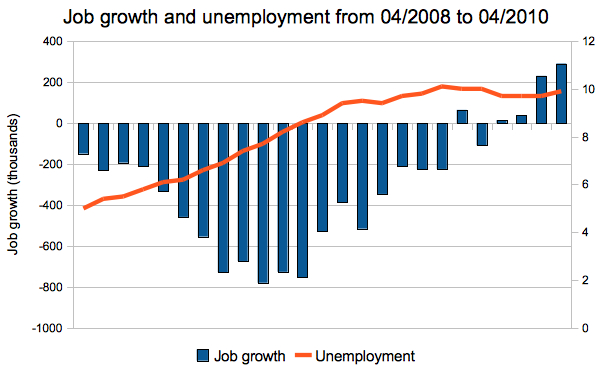 It shows unemployment rising as job growth remains negative, leveling off as (perhaps) people drop out of active job seeking, and than actually going up again there at the end in response to two months of solid job growth.

So it turns out that, in this case, a rise in the unemployment rate is good news.  It means some people are hopeful again.

It's also the case that, because America still has a net growth rate (births + immigration > deaths + emigration), there needs to be an increase in the absolute number of jobs just to keep the relative employment rates even. In other words, if 100,000 jobs are created, but 120,000 new people start looking for work, the unemployment rate will still go up.

That, or they've run through their savings/graduated from school/are no longer doing whatever they were doing, and now they really need a job.

U-3 and U-6 measures increased by the same amount, so I'm not entirely sure I buy this. U-6 already measures people who are unemployed, but aren't looking for work because they are discouraged. On the other hand, U-6 also measures those who have part-time work, want full-time work, but can't get it.

What happens to those who quit looking for jobs?

I've put together a series of charts on both inflation and unemployment that I thought you folks might appreciate. Click on a thumbnail to view the interactive flash version. Enjoy!