When I visited New Orleans, I was tickled to see Mardi Gras beads, months after Mardi Gras, still hanging from trees along the parade route: 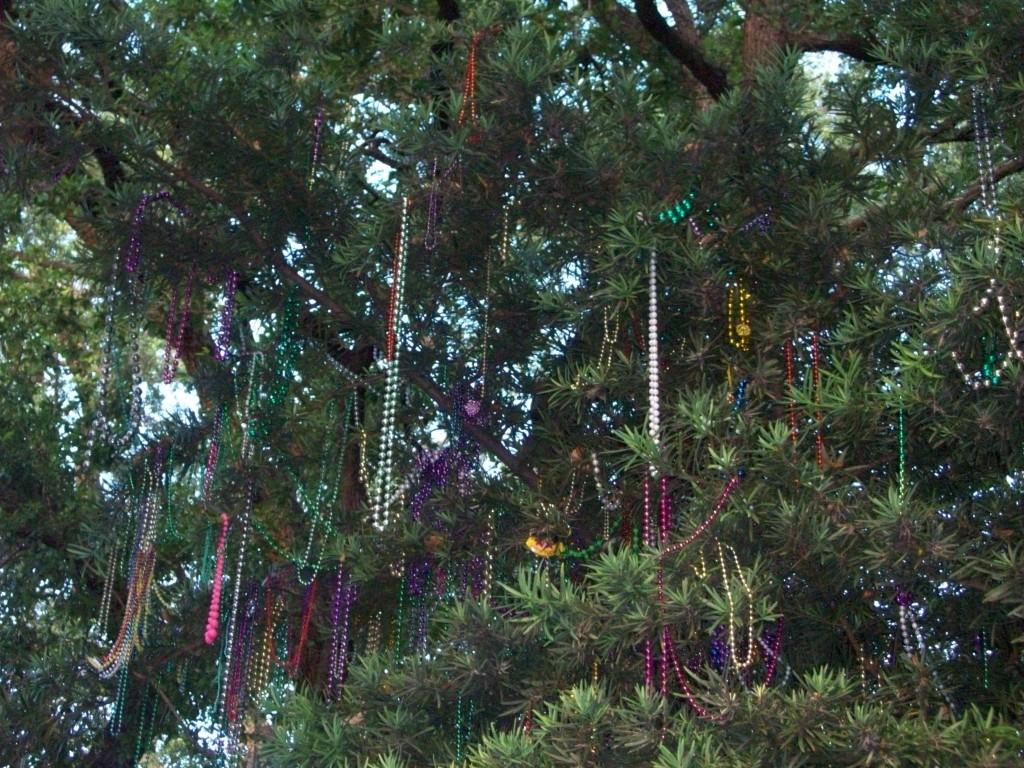 It was neat to see the beads, so pregnant with local meaning, glinting in the trees.

But later, I wondered, where do Mardi Gras beads come from? It turns out, according to Kevin Fox Gotham, who’s written a great book on New Orleans tourism, they’re made largely in China. He writes:

Workers in China sew the plastic beads for $4.25 a day, or about $85 a month. Local krewes contract with U.S. bead distributors to order customized beads to sell to individual members, who toss the beads from the parade floats. In short, the production of Mardi Gras beads, products, souvenirs, and memorabilia is no longer the province of local craft skills geared toward local consumption; it has been appropriated, reimagined, and retooled for mass production and mass consumption.

It turns out there is a documentary called Mardi Gras: Made in China, that is all about the bead industry. The trailer:

A great example of the global economy.

I can't help but wonder what kind of a big mess New Orleans must be after Mardi Gras, with all those wasteful, worthless plastic beads scattered all over.

...duh? I mean, did you think they were All-American crappy plastic?

I know that lots of krewes (especially the less-well-known and thus less wealthy ones) try really hard to reuse throws from year to year - both beads that don't get tossed and caught beads that are donated back to the krewes after Mardi Gras. I attended a couple of the earlier parades in 2009 and caught memorial beads from as early as 2004 (and then donated them back to one of my friends who has a membership in a krewe).

Not to mention that in most krewes, the individual members are expected to pay for their throws on top of the membership fees, costumes, etc. etc.

I was talking about this with my husband yesterday, as we kicked the trash out of our path on the way home after Orpheus. It's not just the beads, it's the way they're packaged; about a dozen wrapped in a plastic bag, so after each parade there are thousands of plastic bags lining the street. However, the City of New Orleans does a very good job cleaning up after every set of parades. Right away the streets are hosed down. The plastic bags get me more than the beads. If they were made of some sort of biodegradable paper that would fall apart when it hit water...it would be so much better! And that, even if the plain beads weren't made locally, what if the nicer ceramic medallions were? Think how many people it could employ. But then the beads would never be cheap enough to throw as many as the public now demands. There must be a way to have a greener Mardi Gras, but the people have to start demanding it of the Krewes.

Don't let your kids play with these things. Especially putting them in their mouth. Just give them a smell. Reminded me of Chinese dry wall.

The link isn't working... Has anyone here seen "The Order of Myths"?

The beads are not trashed. A lot of them are cleaned, sanitized and handed to ARC (mental health association) that sorts them and then resells them to paraders throwing beads the next year.

Yes, there is trash associated with it, which, as someone mentioned above, is expertly cleaned up immediately at the end of each day, not just at the end of Mardi Gras.

Until you have actually been to a real Mardi Gras parade and experienced the absolute thrill of catching one of those beads, especially the larger ones or medallions, don't judge. It doesn't matter how many you have collected over the years, the one that is thrown to you is special, magical. Give them away if you don't want them.

Also, there are many in New Orleans who wonder why Mardi Gras beads cannot be made by hand (and using glass, which is lighter) in the city, making jobs for folks right here. Any ideas?

This might be an interesting video. However, the focus on beads for flesh display is so far removed from the reality of the typical resident of New Orleans (or South LA for that matter). It's primarily a tourist phenomenon focused on a few blocks within the French Quarter. So the narrow focus on just that exploitative aspect immediately turns me off. It also makes me question the research that went into the production of the film and just how much it is slanted to make one particular point.

For us, Mardi Gras is by and large a family event.

I doubt seriously if anyone has done a study on just how much recycling/reuse/repurposing of just beads occurs from year to year vs. beads that are simply trashed. I don't even know if it's possible. I've been recycling and reselling beads since I was a little kid and I'm 38 now. One of the things friends and I enjoy is catching what we call "ugly beads" which are beads that are no longer produced and come from the 1970's and 1980's.

So one question I have is: looking at that tree full of beads, how many of those are brand new vs recycled and how many years have the recycled ones circulated?

Obviously there are implications worth discussing with the bulk of modern day new bead and trinket production being done in China. But the whole picture is undoubtedly far more complex and not so black and white as this trailer implies.

One thing we do know is that mardi gras isn't going away and that the positive economic impact on New Orleans pretty much ensures that: http://www.nola.com/business/index.ssf/2009/12/study_direct_economic_impact_o.html . Keep an eye out for the final study results.

I've watched this film in several classes, and the point seems not to be the farming out of local jobs, as so many of these comments seem to focus on, but instead of the exploitation of non-Americans and the dehumanizing conditions of expansionary capitalism.

[...] earlier post I mentioned the documentary about Mardi Gras beads (Mardi Gras: Made In China). This post on Sociological Images checks in on the subject of beads: The writer, though charmed by the [...]