Men are “Loved”; Women are “Property”

Victoria A. sent along this ad for Cafe Press: 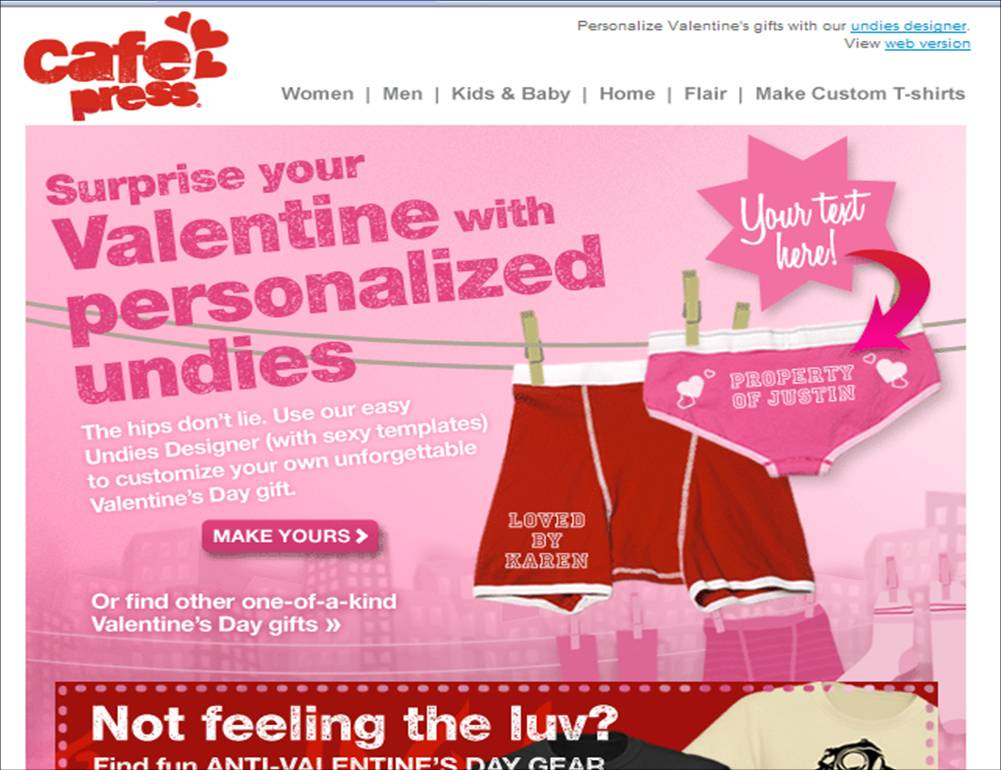 Okay, okay, I know it’s just Cafe Press and anyone can make anything on Cafe Press and, heck, these undies probably come in both variations… but even so!

I mean really! Can we just think a second before we make an ad that includes a pair of men’s underwear that say “Loved by…” and a pair of women’s that say “Property of…”? I mean, can we just NOT do that when women actually are the legal property of men in some places and were at one point in history in many?

It’s not a joke. Women who, by virtue of being owned by someone, could not own property themselves; could not vote or enter into contracts; women whose children were taken away if they separated; who, when raped, deserved no compensation because she belonged to a man who, not incidentally, DID deserve compensation because his property had been tarnished. Can we, like, just not make this ad quite this way? Please?

Wonder how quick it will be before they change that one?

I agree. It's just vile. You'd think they'd at least try to put them apart from each other; try to make it less noticeable. Oh wait, they probably think it's supercute.

It says that they are templates so a woman can get "property of" undies for her man too. It says it right on the site. Don't get your panties in a twist.

I like how it says, "Not feeling the luv?" at the bottom. Nope, Cafe Press, we certainly are not.

Though I also have to add that I'd probably not have noticed this if Sociological Images didn't point it out.

And, yes, that is the most common text I've seen in their print ads too. Whether they're showing a hoodie or a tee shirt or whatever, the text displayed is "Property of..."

This is not to argue with the point of the post, but to add to it. People don't pay attention to context.

I just went onto CafePress, and on the "make your undies" page the first thing they do is allow you to select a style. Out of the three women's pairs and three men's pairs, one pair of the men's underwear says "Property of..." and none for women say that.

I can say with confidence that this ad. is a big fail, but I also agree with Dragonclaws; it's just a case of not thinking things through.

At the Jersey Shore, the boardwalks are lined with t-shirt shops that will iron-on or airbrush designs on shirts (or other items of clothing). Every summer there's some catchphrase or picture that's popular that year (as with "I'm Rick James, Bitch" the year that sketch was made popular on "Chapelle's Show") and shows up in the samples in every store window. About six years ago, my boyfriend and I were walking on the boardwalk and saw sample booty shorts with "Tom's Piece" airbrushed on them. Another sample had "Tom's Property" on them. This was the popular phrase that summer and I saw these things EVERYWHERE on the boardwalk. I can't imagine any self-respecting woman (or any right-thinking man) buying these things, but what's even worse is that someone in the shop had to think this up and airbrush it onto a pair of shorts.

Ad-Fail? Yes. However, I want a pair of these that say "Property of Wizzle." Reclaim the booty!

“It’s incredibly relaxing not to have that pressure to prove something to ourselves and to other.” « Mothering Two — February 14, 2010

[...] the article is how nearly all mainstream marketing is geared towards heterosexual couples.  How unfair is that?  It’s downright fucked up.  It’s bad enough that I got married when only [...]

I'd like to second the reference to the bit at the bottom for us singles. Just because I'm single doesn't mean I'm "Not Feeling The Luv"... I resent the implication that I'm bitter and unloved because I'm no one's property.

First thing I think of for "Property of" - http://nfl.imageg.net/graphics/product_images/p1819910dt.jpg

The phrase has been on sporting apparel for decades.

mens underwear that is polyester based is the stuff i love to wear, polyester does not stain that much compared to cotton .,:

[...] bought your gifts, you can now exchange them with your partner of the opposite sex. Take a good long look at the marketing surrounding this holiday, and you’ll notice monogamous heterosexuality [...]

Even when I was a 12-year-old girl who was incredibly naive about guys and quite susceptible to sexist cultural messages about them, I was always squicked out by girls who defined themselves by their boyfriends in this manner - e.g. "Property of Justin," writing "Mrs. ________" over and over, etc. The big trend when I was in middle school was the Mrs. Male Celebrity shirts, like "Mrs. Orlando Bloom" or "Mrs. Johnny Depp." You're 12 but you're already defining yourself by your crushes?

Oh, cool off. If a woman consents to be her man's (get that? HER man's) property, it's just in fun as it is up to her in the first place.

[...] we buy for Valentine’s Day? Who cuts the flowers? Where does the chocolate come from? Are Valentine’s products gendered? How are our expressions of love linked to consumption in Valentine’s Day, where love = the [...]

Right right... it is interesting and something to be careful and critical of. What I can't stand, is how some people just say "get over it" or "come on" etc. Yeah, it's easy to not see these annoying things when you're part of whatever privileged group (be that white, male, high socio-economic standing, heterosexual...)

Women as property. It's just a way to prevent women from cheating and getting pregnant.

Keep in mind that men are not naive at all. And also, women are considered property to ensure their husband's paternity. It's to prevent them from having another man's child.

[...] we buy for Valentine’s Day? Who cuts the flowers? Where does the chocolate come from? Are Valentine’s products gendered? How are our expressions of love linked to consumption in Valentine’s Day, where love = the [...]