Orientalism and the Consumption of the Other

These days, if you live in the West, thinking about Asia–whether it be Chinese labor, Japanese inventions, Indian demographics, or Korean politics–is taken-for-granted as part of knowing about the world.  During the colonial era, however, when “mass media” was largely limited to print, Americans and Europeans experienced being more-or-less newly introduced to different cultures.  This spurred an entire industry in which “Africa,” “the Orient,” and the “Middle East” were presented to curious Westerners.  These presentations, more often than not, were objectifying.  Westerners were able to enjoy reveling in the seemingly bizarre and unfamiliar people and customs of these Other places (with a capital “O”), as if Other kinds of people were new species of animals over which to fawn.  This accumulation of documents with which the average Westerner could try to understand their “foreign” counterparts were produced not only by travel writers, but anthropologists, artists, imperial employees, novelists, and others.

Edward Said, in his powerfully influential book, Orientalism, first articulated the way that efforts of these actors coalesced into a mythology about “the Orient.”  A mythology in which the East and the West were set in opposition and the East was used by the West to define its own, superior identity.

Katrin sent in one example of this traffic in Orientalism.  It’s a postcard from the early 1900s that depicts a “Burmese Beauty.”  It was painted by Robert Talbot Kelly and originally published in his book, Burma (1905).  The caption reads:

A Burmese Beauty. The Burmese women are generally attractive, much more so than the men, and present a pretty picture as they walk about attired in their gaily coloured skirts and shaded by their quaint umbrellas. All the ladies smoke in Burma, large cigars being the favourite ‘weed.’ 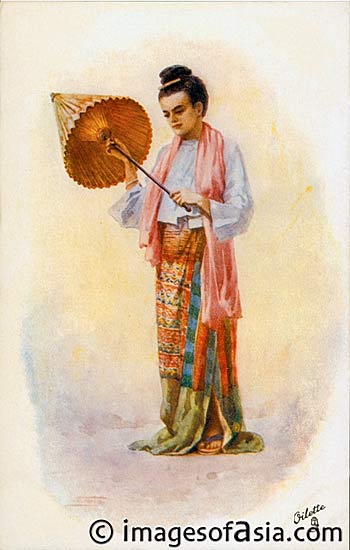 Here, the people themselves are seen as objects for a (distant) touristic gaze, kind of like the generic mostly-naked-woman-in-tropical-paradise postcard that we still see today.  More examples of colonial era Orientalist postcards depicting Burma (from Images of Asia): 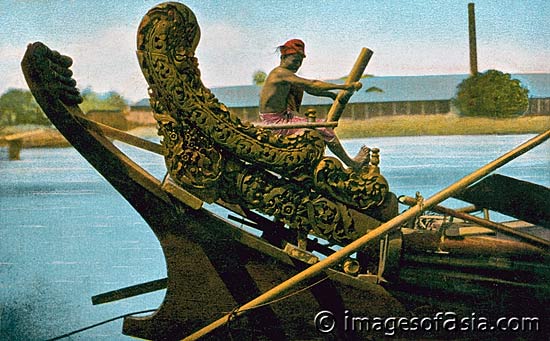 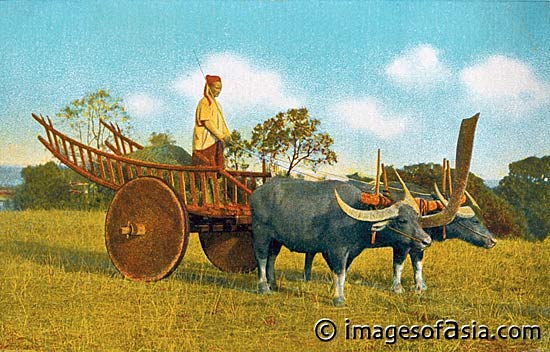 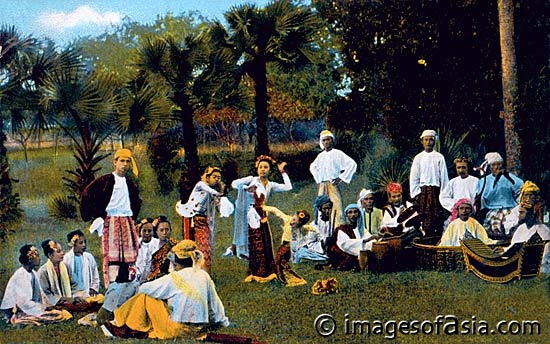 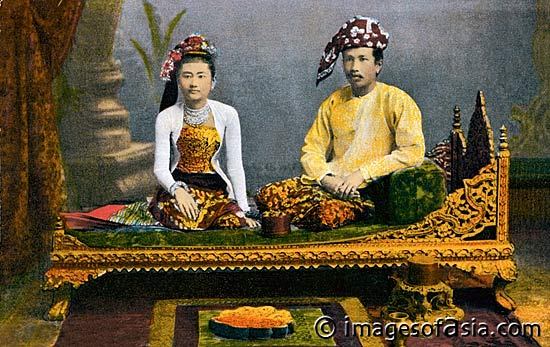 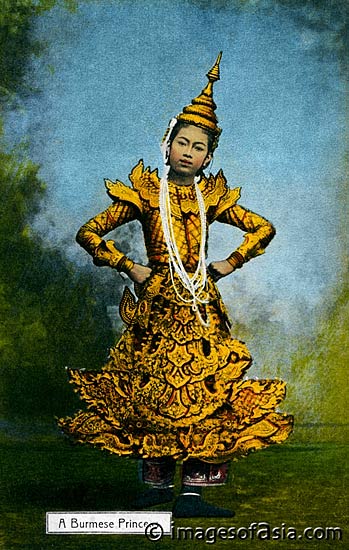 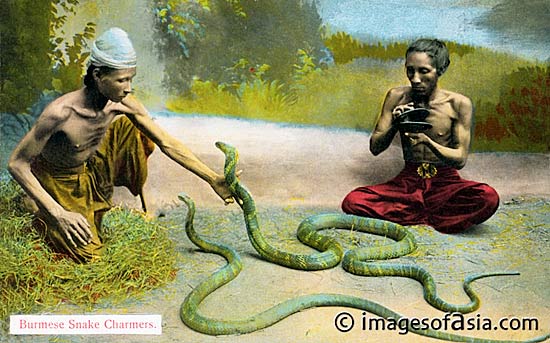 The deep flaw in Said's Orientalism is that is displayed the reductive habit of mind of the so-called orientalists. There can be no understanding of self _or_ other if the supposed occidental v. oriental divide is continuously built up as with his text.

Anglos are not unique in creating false dichotomies; so too do Asians construct images of the West in ways that limit understanding and authentic cross-cultural interconnectedness.

Which is to say: honkey folk aren't necessarily any more wack than those slanty-eyed mofos; everybody got a drunk Uncle Earl who says some ignorant ish during Turkey Day dinner.

well, the text is exact as you describe it, but I wouldn't cathegorize the rest as all bad. The second and the third just descript some fancy-looking objects, that were actually used, the fourth could be hanging over someone's bed as portrait of their own grandparents, and the prince's clother were made so flamboyant exactly for being looked at, to show off (showing richness and power, from which at least the richness part is easily communicated trough the picture). There isn't any industry presented, but as a photographer I don't feel responsable neither to document the fancy and the boring things in statistically corect ways. And in 1900 most of the word was a more agricultural than industrial kind of place anyway.

(sorry for the language, I'm tired and can't find the non-pretentious words)

It occurred to me, as I was reading this, that perhaps "orientalism" and the like are not so much a result of disordered ways of thinking (as we often think of them) but of limits in human-to-human contact. In other words, I'm not sure how we could NOT 'other' each other if the only way we know about each other is in print. As the world has become increasingly connected by other ways of knowing what is going on far away - through more advanced methods of communication, like photography, telegrams, telephones, television, and the Internet - it has become easier for us to recognize people in 'foreign' places as similar to ourselves because our contact with them is not bottle-necked through only one or two flawed mediums.

Even if it's true, it still doesn't excuse orientalism, or mean that we don't need to fight it, or suggest that everything is okay now that we are so technologically advanced, or that we are naturally evolving out of 'us vs. them' thinking. Instead, perhaps technology has played a larger part in this than we normally acknowledge.

I find it odd that noone has commented on the text of the card yet.

It occured to me as I read this that 'the Orient' was certainly not the only place otherised for tourists, so I'm not entirely sure why the focus is so often on the exoticness of the orient on this blog. And I don't think the divide is/was a simple east/west divide either.

I'm thinking of Ireland really. Ireland is in 'the west' but if you look up Ireland on google, you can easily find images like these: http://maggieblanck.com/images/July934.jpg (from 1939) - images which were and are still sold to tourists. The website that photo was on is a prime example of how quaintness is still effectively marketed. I doubt very much that a lot of turf is still cut by hand - some yes, but BNM generally mills peat into briquettes which we burn (in urban areas at least) rather than turf.

A fairly typical depiction of Ireland on a postcard would generally include green fields, stone walls, a winding road with a bright cart on it, and a farmer with a flat cap. Maybe a thatched cottage, with a wagon wheel or an old plough propped outside. If it's an older image, people usually won't be wearing shoes - women may be wearing shawls. It's a highly romanticised image of Ireland's peasants. Today, Ireland is almost nothing like that except in areas which put it on for tourists, and yet these images of Ireland persist... Can the same be said of oriental countries?

Also it interests me - this process of othering. Is it usually a race/ethnicity thing? Because 'Irish' people are fairly white, so I'm not sure if this is actually othering/objectifying. Particularly because a lot of American/Canadian tourists seem to come here to get in touch with their roots? If someone could shed some light on this, I'd deeply appreciate it :-)

Finally, I would debate whether or not Europeans were only newly introduced (even more of less newly introduced) to Asian cultures under colonisation. I've taken a couple of modules in college about globalisations in world history and the like, and it's quite interesting how much trade there was before the 19th century. Porcelain, for example, which was only produced in China and Japan until C19th was popular from the 16th century on if I recall right. But then there was a particular type of Chinoiserie (possibly predating postcards) with stereotypical portraits of 'the Orient' depicted on them, so I suppose your point about objectifying their culture still holds, just from an earlier date perhaps?

Here, the people themselves are seen as objects for a (distant) touristic gaze, kind of like the generic mostly-naked-woman-in-tropical-paradise postcard that we still see today.

Not sure I follow or agree. How are they being shown as objects? I see people costumed in more or less authentic garb. And the mostly-naked-woman is a pretty accurate representation of most south pacific islanders before western norms of modesty started to influence them. I spent a good deal of my youth in Kwajalein and the locals were often scantily clad... it was just more comfortable in the oppressive heat.

How do you propose to portray a foreign, newly discovered culture via photography that would preserve their 'human-ness'?

Let's be clear I acknowledge the further othering and objectification in our culture, I just don't see it in these examples.

During the colonial era, however, when “mass media” was largely limited to print, Americans and Europeans experienced being more-or-less newly introduced to different cultures. This spurred an entire industry in which “Africa,” “the Orient,” and the “Middle East” were presented to curious Westerners. These presentations, more often than not, were objectifying. Westerners were able to enjoy reveling in the seemingly bizarre and unfamiliar people and customs of these Other places (with a capital “O”), as if Other kinds of people were new species of animals over which to fawn.

Sorry, but this dynamic is still going on, which is why you have "Wacky Japan" stories (that Japanese people have weird game shows; they eat natto for breakfast, which is weird and gross!). There are many blogs and websites devoted to how Japan is weird (kancho; jokes about tentacle rape), and blogs and websites about Westerners' travels to East Asia.

Maybe you not familiar with the very rich and developed Internet culture devoted to Orientalizing Japan.

Kristian Davies writes a very nice defense of Orientalism in the foreword of The Orientalists: Western Artists in Arabia, the Sahara, Persia, and India, though his book is more concerned with the "traditional" definition of the subject. (IE, it focuses on mid-18th century painters depicting Muslim cultures.) I'm not sure if you've ever covered it before, but I think that sort of Orientalism might be a very fertile topic for a future post. :)

(Sadly, the book is out of print these days. One thing I noticed about the art in it is that the present stigma of Orientalism seems to represent a gap between artists' intentions and the public's tendency to read their imagery as exotic -- it's fairly clear in the work of masters like Gerome many Orientalists tried to represent their subjects with dignity via painstaking observation. [One thing that's great about Orientalists is that they painted a lot of African men in a very naturalistic manner during a time when you just don't see very many non-Europeans in Western art.] True, they may have been motivated by romanticism, but I think many Orientalists were making an honest attempt to document the cultures they found so fascinating. Said's Orientalism implies a disingenuousness, a conscious effort to exoticize and otherize, and while that may be present in some bath house and harem pictures ... I just don't see it in many of the masterworks of the genre.

Sorry to babble! I just find the subject so fascinating.)

[...] but I thought we were ready to move past a post-colonial theory 101 class’s first take on Orientalism. This article actually made the case to me that I would’ve probably taken part in [...]