The Politics of Hurricane Humor

The city is in recovery and it is emerging with a new identity tied tightly to that hurricane.  Though the storms have always played a role in the mythology of the city (consider its most famous drink), hurricane imagery increasingly has part of what defines New Orleans.  I’ve spent quite a lot of time there recently, and I can attest that the hurricane is everywhere: in jewelry, in art, and on bodies, for example. 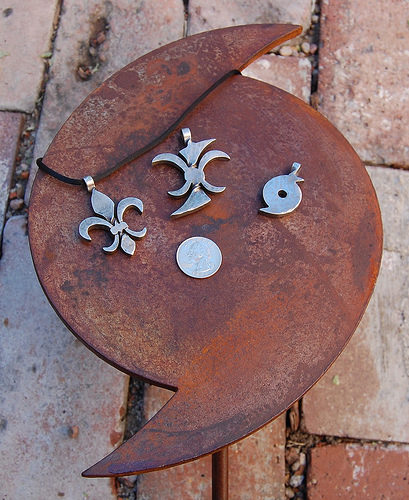 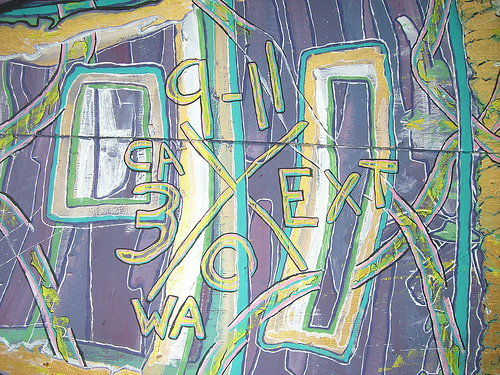 In light of this, Casey F. thought it would be interesting to think about who gets to use hurricane humor?  Case in point:  A flickr stream by Editor B includes the following two images.  The first uses hurricane imagery to suggest that the New Orleans Saints is going to “attack” the Indianapolis, Colts at the Superbowl (in Miami, FL): 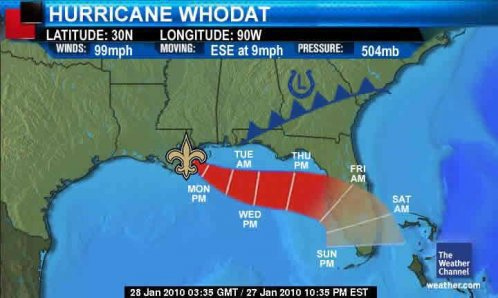 The second also uses hurricane imagery, but this time it’s an Indianapolis Colts fan using it against New Orleans: 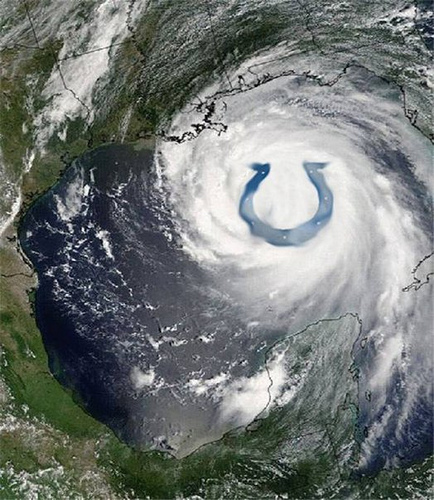 Casey feels that those who suffered from the hurricane, including New Orleans, “…have reclaimed hurricane imagery for ourselves, because we survived it.”  But, she says, “That doesn’t make it acceptable for others to do so yet.”

For Casey, the use of hurricane imagery to suggest that a team is going to crush its opponent is like the use of the n-word or “queer.”  It was a hurtful term that has been reclaimed by those it most  hurt.  Thus, blacks and gays can use the words (respectively).  But, still, when others use them, they still carry a sting.

For someone who was harmed by a hurricane, using the imagery is a way of reclaiming the hurt they suffered, even appropriating the strength of the force that hurt them.  But, for others to use it, it is trivializing that same hurt, re-imagining the destruction they suffered.  It is not funny, from this perspective, to imagine that New Orleans could be hit again.

I sympathize with Casey on this, but think it’s also an interesting topic for conversation.

I'm not all that sure about using the word "reclaimed", but that's just because I've done so little research into the concept. I DO think it's horrendously tacky to use hurricane imagery as a metaphor for beating a sports team. It feels....trivializing. Hurricane Katrina killed, destroyed, and took years to recover from. This is a god damned football game. Get some perspective?

It seems trivializing to me to compare the experience of New Orleans to that of black people. The n-word is a hurtful term because it represents systematic discrimination based on race. Race and racism are not things that anyone has control over. A hurricane on the other hand is a disaster that occurs to one particular city, and then it's over. Difficult though it may be, the people of New Orleans are now free to rebuild their city, or to move out of it, perhaps to somewhere not affected by hurricanes.

Hurricane imagery also does not imply a judgement on New Orleaners in the same way that calling someone the n-word does.

Is "queer" really a hurtful term? I knew it has somehow become associated with gay people, but I was hoping we could go back to using it to just mean "weird" again soon.

I get the feeling that Katrina has become a symbol for the experience of racism and government oppression, and that systematic racism was enacted and amplified in the aftermath of Katrina. So it makes sense that Katrina has that one-way feel for some people.

Here's a link to a documentary which explores the psychology of 'sick humour' (i.e. racist jokes, disaster jokes, etc)

I thought it was quite interesting and that maybe it would contribute to the discussion. It is, however, very offensive and explicit at times; that being said, I feel it is important to recognise that these jokes do exist and should not be swept under the rug but opened up and examined.

It is also interesting to note how little has been written on the Sociology of humour / comedy and its function in society - especially as it is primarily a social and communal phenomenon.

I liken the "Colts Hurricane" image to, for example, a sports team labeled as planes heading menacingly towards NY. If that analogy would be used during a live broadcast, there would be some serious uproar. Unfortunately, I too believe that this is just another subconscious form of racism rearing it's ugly head. The imagery is very tasteless.

I don't think that queer fits your example of reclaimed terms that only members of the specific minority can use. I self identify as queer - I WANT people to call me that instead of bisexual. Including straight people. Queer is also often used as a catch-all term, and I think it's a better option than using an acronym, because that's a mouthful and you inevitably leave someone out. (LGBTQIA, and there's a lot of people missing there....) I think a more apt example of what you were going for would be "dyke" - I use the term, but I'd probably be upset if a straight person called me that.

There's a lot of regional/subcultural differences involved, of course. I attend a hippie liberal arts college whose queer culture is dominated by women, and the usages above are pretty common there; in other settings, not so much.

Last week in the New York Times there was an article about New York's health department cracking down on bars serving raw eggs in drinks without warning customers about the health dangers. This has created a scare among certain bar owners and bartenders that the city is going to ban raw egg drinks altogether. One quotation:

“If they make it illegal to serve egg-white drinks, that would be Hurricane Katrina for us,” said one of several bartenders and club owners who said they had been challenged by inspectors but declined to be quoted on the record, for fear of antagonizing health officials.

Besides disgusting me, it kind of amused me, because the choice to include this utterly tasteless and insensitive quotation showed me exactly what the reporter thought of these bartenders and their histrionics.

It's too much to say that one can't use a metaphor if it refers to an event or a concept that one hasn't been personally affected by or involved in. Hurricanes have been used for at least decades as metaphors. Ditto storms. Lightning. Shall we determine that people may no longer use terms like 'like greased lightning' because lightning, related to lightning, has injured and killed at least tens of thousands over time, and casual use is insensitive to those people and their families?

... and the Saints win! So I wonder now how that win will influence the course of such imagery and the character of the city.

i don't think i'll ever be able to get fully away from hurricane humor given that i share a name with the hurricane.

the humor i come face to face with is a different kind of humor than the one you've been discussing - less large scale, more personal, more pointed.

i'm not really sure where the compulsion comes from, but more often than not when someone meets me they find it necessary to point out that i share my name with the hurricane and they usually do this by making a joke of some sort. sometimes they just plain laugh, other times they might make a reference about me being prone to violence, me being like a hurricane, me wreaking havoc in people's lives.

it, of course, was especially bad right at the time of the hurricane. my friends would clip newspaper articles that had my name in the title with death counts and things like that. i was really angry a lot of the time.

in personifying the hurricane by giving it a human name what ACTUALLY happens in our minds and our cultural consciousness? and what about the gender of that name? i have absolutely no way to know how the legacy would be changed if it had been given a male name or if those males who shared the name would be teased with the same "Are you moody and murderous, ha ha?" type comments. i do wonder, though.

i wonder if i, as a person who embodies the name that is the same as that of the hurricane, become something of a target for people's unresolved anxiety or grief or i don't know what emotion. i'm sure the reasons why people respond this way could be discussed and debated at length. i'm sure there are psychological and psyho-social reasons for why people do this and why we started naming hurricanes in the first place.

i have no idea why the response to my name is laughter and not sadness or seriousness. i don't know why it seems so outrageously hilarious that my name and the name of the hurricane happen to be the same. i also don't know why its funny to make light of such a serious disaster by attributing negative personality characteristics or murderous traits to me.

Hmm, isn't one of the pieces of hurricane imagery a fleur de lis reflecting the city's French heritage rather than a hurricane?

It's interesting that no one thinks about the significance of the 4th image in relation to Florida's history. I am a native Floridian, so that's probably why I thought about it, but no one seems to recall that Florida has quite a history with hurricanes as well. Ever heard of Andrew?

[...] a comment » This is another post from my old blog. I was reminded of it recently when I read this excellent post at Sociological Images. Lately my mind has been on all things NOLA. (Our [...]

It hit the entire Gulf Coast region, the entire area was affected, not just New Orleans.

I don't know why it's always, "Katrina hit New Orleans", like it targeted the city like a smart bomb, when people hundreds of miles away from the city died, and had their entire lives wiped away.

As far as the Hurricane humor, having lived through and survived Katrina, it does seem a bit trivializing. But if we can't joke about it, we'll go crazy, if I only thought about the dead body that they pulled out of my backyard, I wouldn't be able to live normally.

I think you have way too much time on your hands. Get a sense of humor. People are really, really sick of the PC gestapo.

[...] interesting post on Sociological Images a while back contended that “hurricane imagery increasingly has part [...]

[...] Hurricane imagery in New Orleals: “Though the storms have always played a role in the mythology of the city, hurricane imagery increasingly has part of what defines New Orleans. I’ve spent quite a lot of time there recently, and I can attest that the hurricane is everywhere: in jewelry, in art, and on bodies, for example.” That’s someone’s claim. Thoughts, New Orleans people? True or false? Examples? [...]