Even the most cursory discussion of the history of women’s paid employment in the U.S. will include the importance of World War II, when the scarcity of men meant many jobs became available to women for the first time.

The U.S. wasn’t the only place this happened, of course. In the face of a massive attack by the Nazis, the Soviet Union allowed women to occupy combat positions, including setting up three regiments to fly night bombing raids (according to Wikipedia, it was the first nation to allow women to do so). The regiments became known as the Night Witches:

“We slept in anything we could find—holes in the ground, tents, caves—but the Germans had to have their barracks, you know. They are very precise. So their barracks were built, all in a neat row, and we would come at night, after they were asleep, and bomb them. Of course, they would have to run out into the night in their underwear, and they were probably saying,—Oh, those night witches!’ Or maybe they called us something worse. We, of course, would have preferred to have been called ‘night beauties,’ but, whichever, we did our job.” 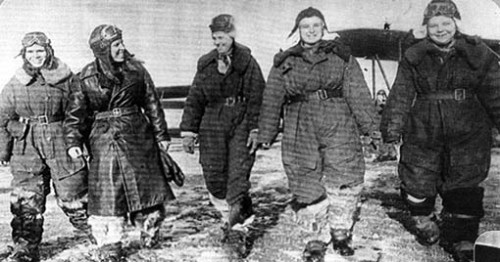 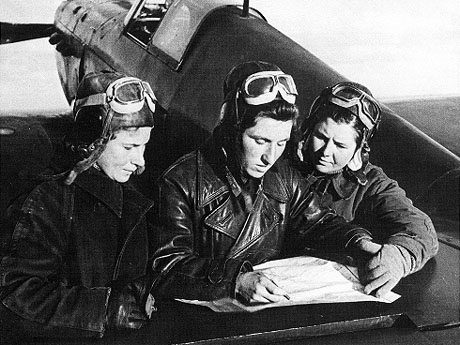 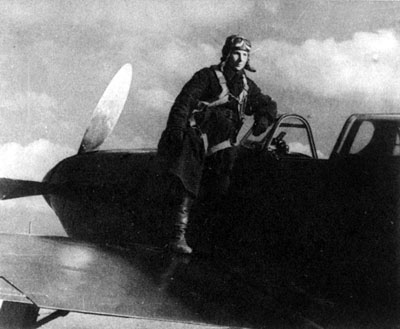 In this video, Lidiya Gudovantseva recalls working as a sniper, including the first time she had to kill a German soldier and later being injured herself:

When the war ended, many women in the U.S. were pressured to leave their jobs; similarly, female Soviet soldiers found that opportunities for promotion dried up during peace time. They were apparently even barred from military colleges, closing off many positions to them altogether, though the military’s draft policies stipulated that women should be called up next time there was a war. Women served as a reserve labor force for the military, to be called up when needed (and praised on Soviet propaganda posters) but pushed out of the ranks to provide room for men the rest of the time.

There is a film by Larisa Shepitko called Wings about a WWII fighter pilot who has trouble readjusting to life after the war. Its a beautifully made film and has an interesting feminist subtext. For anyone whose interest was piqued by this post, I highly recommend watching it.

Quite surprised they never did an Enemy At The Gates job on Litvyak: http://everything2.com/title/Lily+Litvak

Excellent story, not surprised that I had not read anything about these brave women before.

Thank you for bringing these women to our attention.

Sad to see they were treated the way they were after the war. Not surprised but saddened.

What the hell does 'yank' and 'American oppression' have to do with Soviet combat pilots from WWII?

When life or working conditions become difficult, many people fantasize about early retirement as a form of escape. Early retirement can be a reality if you have taken steps early enough to prepare for this. If you have the foresight and the discipline to set aside savings from your employment income and invested them wisely, perhaps you stand a good chance to do whatever you want to do whenever you want to do it. For jimmy choo handbags people who enjoy their work, mandatory requirement to retire at a certain age may not be looked forward to. They dread the day when they will need to stop going to work as part of jimmy choo handbags a regular routine, fraternizing with their colleagues and basically keeping themselves productively occupied. Another group of people are content with their previous life stage as employees and look forward to transitioning to their next stage of retirement. In summary, different people take to retirement in different ways.A minority of people start saving for their retirement from their first paycheck. Many people do not start saving for retirement until it is a little too late. Those who started early with saving and investing for retirement, usually can look forward to comfortable retirement. For those who are unprepared, they may survive their ret...

If we wish to push for a gender neutral society, we should not be at all amazed by the fact women can (also) do something like this.

Having said that, I think these people (I said people) are awesome. Flying night-harassing missions requires a lot of nerve, specially considering the rickety airplanes they flew (Polikarpov Po-2 aka "sewing machine")

It is curious that, being the soviet revolution self-declared feminist, still the russian patriarchal society couldn't stand women working while men being unemployed.

Also, "Night Beauties". (Is it wrong to prefer be called like that?)

The tragedy is that when women do something they do it infinitely better than men, as they combine innate intuitiveness with intelligence, where men function primarily on brute force. That is why until 1918, no women anywhere in the world had legal rights. How many of you knew that? For thousands of years, in every country, except ancient Egypt, men enacted laws that prohibited women from education and freedom of action, relegating them to possessions, slaves, prostitutes or concubines and courtesans. Everywhere on earth women became possessions. The British and American suffragettes were among the first women to combat this, and were beaten, imprisoned and starved to stop them. But they finally succeded in 1918 in achieving the right to vote and go to good universities for the first time in history. Europe took many decades longer to free women of serfdom , and now worldwide male abuse and murder of women is finally being bruited and combatted by organizations such as One Billion Plus, Soroptimist and Chime for Change, the latter founded and sponsored by celebrities such as Salma Hayek, Madonna and Beyonce.
Women were finally used in WWII because Russia needed bodies to man their planes and women´s ingenuity made them especially good at stealth flights.