Evidence that they’ve been trying to sell us high-technology razors since at least the 1930s (source): 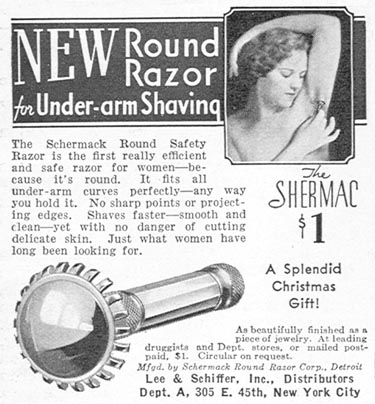 The Schermack Round Safety Razor is the first really efficient and safe razor for women–because it’s round.  It fits all under-arm curves perfectly–any way you hold it. No sharp points or porjecting edges.  Shaves faster–smooth and clean–yet with no danger of cutting delicate skin.  Just what women have long been looking for.

As beautifully finished as a piece of jewelry…

this reminds me... i have always been curious about the stigma of women having body hair. When did it become a standard that women have to shave their bodies?

I'd appreciate answers if anyone knows this history.. many thanx

Oooh round! Honestly that thing look more dangerous. Its looks like a squid jig

GOOD GOD THAT THING IS TERRIFYING. It's like something out of Phantasm.

Deaf Indian Muslim Anarchist: I researched this way back in undergrad, so I'm afraid I don't remember all the details, but:

It had to do with ideas of femininity/masculinity and class, race, and mental/moral health combined with women's clothing revealing more of women's bodies.

This, of course, had 0 correlation with real life, but so it goes.

I think a certain amount of the blame for more recent hair removal obsessions can be blamed on the idealization of youth - after all hairless vulvas only naturally belong to pre-pubescent girls - but I don't recall coming across this in the literature I found at the time.

It was very interesting - at one time how hairy a woman was was considered pertinent information when putting her in jail or confining her to an asylum. Sounds like a bad joke, but it wasn't.

ps: some of the ways people (women) have used to get rid of "unwanted hair" are way more alarming than the wierd thing above - before people really understood the dangers of radiation there were companies offering to expose customers to it for the purposes of hair removal - I remember seeing an ad for such a service, but google fails me at the moment.

I agree with Deaf Indian Muslim Anarchist, the whole no body hair equaling femininity has always confused me. I firmly believe men should shave their armpits for hygienic reasons--every man I suggest this to is grossed out. Also, it's odd how the razors meant for women always have less blades than the man's. If the newest man's razor has 5 blades, women are then allowed to have 4, and so on. Very strange.

That looks like a torture device from the middle ages.

Just say NO to shaving, seriously. This vintage gem seems just as brutal as some of the more modern methods of depilation out there. I get that people claim to make informed, individual decisions that aren't based on social pressures, but this seems to make little sense considering the economic and laborious processes that are often involved. Five years razor-free, and my hair is soft, smells nice, and looks totally normal to me now. I might get a few weird looks when I wear sleeveless shirts, and admittedly it took a while for me to get there, but it feels amazing to have an intact, natural body that doesn't sting or itch from hair removal.

My male partner, who would never consider shaving his balls, has learned to love my body hair. It's an empowering decision to refuse to conform to a widely taken-for-granted beauty standard. People have different comfort levels, but I think that women (especially) who are expected to shave and have assimilated shaving into their hygienic routine should try stopping for a day, a week, a year, and see how it changes their outlook on the status quo and social expectations. (And frees up some liquid assets that can be spent on fun things, rather than Brazilians and Nair.)

how the heck does that thing even work?

If science is a search to dispel myth with human logic and rationality a small patch of pit and pubic hair of females can effectively put taboos and feel hated and ashamed by themselves to the detriment of scientific pursuit. Thus hate begins at puberty which nature knows not.