An Ad for A Classic Beer, Requires Classic Sexism

The ad below, sent in by Corinne C., expresses nostalgia for “classic” beers and classic women: 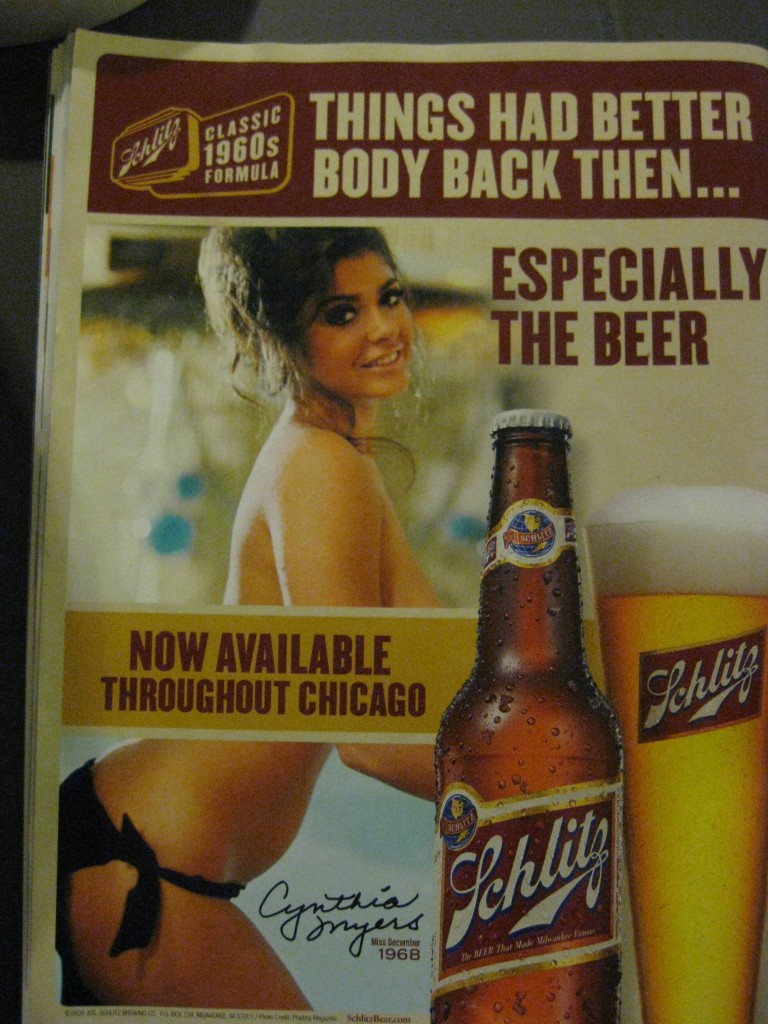 Actually, I think this is walking the line between good and bad - it's objectifying a woman, yes, but it's also saying that "things had better body" in reference to a woman who isn't skeletally thin and who clearly has some booty. She's arching her back and pushing her chest out, but I can't see her ribs. The ad is basically idealizing a rounder, softer feminine form that looks a helluva lot more natural than a lot of the bodies we're sold as "perfection" today.

Ultimately, all it's doing is reinforcing unattainable, unrealistic beauty standards. It's not like in 1968 everyone you saw on the street looked exactly like the woman in that photo, but nowadays we're all different somehow.

That is a seriously attractive woman; thank you for posting that picture. While I agree that the “things” in the ad turns her into an object, we should ask the model if she felt objectified during the shoot. I wonder how would you feel if you were on the receiving end of male admiration (in the way that many models and actresses are i.e. you are aware of how men react to you).

This reminds me of a picture of one of the Twilight actors that was posted a while back. Some of you were going “OMG HE’S BEING OBJECTIFIED”, but to this day I don’t know what the big deal is (besides him being 17). I’m a guy, and it doesn’t bother me at all to see other guys being objectified. Good for them; I’m happy with the way I look :)

If you want to level the playing field, how about objectifying us instead of going after pictures of attractive women? The more I think about it, the more holes I can poke in the idea that female sexual attractiveness is a social construct.

Some food for thought:

“I wonder if we haven’t entered into a period of what should be called ‘adjustment’ feminism. The women’s movement is having to adjust to the realities of life in our culture, where many of its basic goals — including the very basic liberation of women from their pop culture status as a ‘mindless-boob-girlie symbol,’ to borrow a phrase again from Robin Morgan — have stalled or are even backsliding. This week, for example, not only brought a public statement by the head of NOW acknowledging that the fight to have women valued for their inner beauty is essentially a wash[…]”

Culturally (and I’m being West-centric) women are under more pressure than men to look good, but that is changing as we speak. I’ve seen ads featuring guys who definitely had to spend a lot of time in the gym to look like that. It really, really doesn’t bother me in the slightest when women look at them with big eyes.

I'm sadly not surprised at the same old tactic of using an almost naked woman to sell beer. And even worse, I am not surprised that they came right out and referred to the woman as a "thing." It is not the fact if the model was okay with it or not, it is the fact that the advertisement is blatant with referring to women as things, reinforcing this ideal that women are objects.

In response to the first comment, I do not feel that this ad should be commended for having a non-stick thin model. It is as if you are saying that "well it is objectifying the woman, calling her a 'thing,' but since she is not stick thin it is okay." I feel that whatever the size/shape of the woman, if she was portrayed in this same manner in the ad, that it would still be an example of the objectification of women.

“You say you’re OK with other guys being objectified. Why is that?”

Sexual attractiveness (I didn’t merely write ‘attractiveness’ for a reason) goes deeper than fashionable ideas about beauty (we can go over this in more detail if you want). There are very tangible advantages to being attractive -some of them are superficial, some of them not so. Sexual attractiveness plays an important part in human biology (and many other species). On a personal level, on those occasions when women have stared at me, or the time when two women started blowing kisses (which was nice, but I think they were drunk, though) I was actually flattered. I’m not offended with the idea of someone being attracted to me purely on a physical level. A human being is more than a body. If you are certain of it, then it doesn’t bother you what anyone else thinks.

“I hate that some men think it is okay to objectify women as long as men are being objectified as well[…] […] you need to read that blog again. Because you totally missed the point. You quoted it totally out of context.”

Anyone can generalize, so please do better than that (you need to be specific). That blog is describing how women (let’s forget the issues of class and race for a moment) are willing to go under the knife in order to look younger and prettier. To a large degree, women are still judged by the way they look, and that blog points out that after so many different forms of feminism, many women still need to be pretty and young to increase their chances to find a job:

“Yes, standing up for the rights of middle-aged women to have access to cosmetic enhancement is part of the work of contemporary feminism, O’Neill told me this week. It’s the sorry consequence of a number of sorrier truths: The economy is terrible. Middle-aged women, many of whom reduced their working hours, limiting their earning power and ambition, when they had kids or, later, found themselves having to care for their parents, are in a particularly vulnerable spot these days, as they’re increasingly called upon to supplement or take over the lion’s share of family money-making. And any number of studies have shown that people with better (read: younger) looks have a better chance of getting a good job. Particularly women.”

Again, be specific. Exactly what is wrong when I wrote “women are under more pressure than men to look good” and quoted a text that confirms this?

On a completely unrelated note, how can I get an avatar? Do I need to sign up? How do I upload it? Do I have to host it somewhere else?

I thought that this ad was trying to say "In 1968 Cynthia Myers had a much better body than she does now, as you can see by looking at this picture of her." And now she is "available throughout Chicago." Both sentiments seem pretty mean to me!

Actually, I read this as critical: "Things had better body then-- especially the beer" seems to be implying the woman in the picture isn't all that.

"I wonder how would you feel if you were on the receiving end of male admiration (in the way that many models and actresses are i.e. you are aware of how men react to you)."

I am, and always have been since I was a "early blooming" preteen. Personally, I like being talked to like a real person with ideas and feelings instead of some kind of rare porcelain doll to be fussed about and "won over" or put on a pedestal or tucked away in a jewelbox, prize trophy case, whatever. To hell with it, you know? I'm quite used to men making asses of themselves...after awhile, it's just background noise.

It's interesting to note the section of lyrics (from a Brigitte Bardot song) which the advertisers have chosen:

This seems to add another layer to the message of the advert -- whether the woman wants it or not, she will be 'had' by the viewer (perhaps with the help of some Stella!), in the way that woman are trained to succumb to the male gaze.

[...] There’s an argument to be made that beer advertisements also harm women; see here, here, and here. Basically, read Sociological Images. It’s the best blog out there hands down. Eco World [...]

Dudes don't have to put up with this sh*t. I swear it wears you down