Kirsti McG. sent us her correspondence with the manufacturer of these: 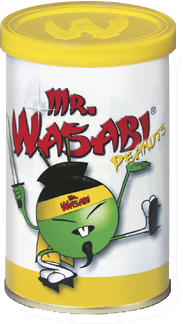 Kirsti, who saw these on the grocery store shelves in Scotland, wrote to complain that the company mascot, Mr. Wasabi, “pack[s] together practically every stereotype about East Asians possible, from wooden toe sandals to buck teeth to samurai swords to kung fu…” (check out the website to see him animated).

Kirsti got a letter back castigating her for daring to be offended by the character.  They told her that hers was the only complaint they’d ever received (implying that she was crazy or over-sensitive) and that she was trying to make them into an “enemy.”

They also used the “some of my friends are Asian” response, explaining:

…we have been cooperating with the Asian manufacturing company for 4 years, we have a registered company in Thailand and Japan in a different line of business, and everybody is delighted with Mr. Wasabi and the branding. It goes so far that the manufacturer has asked us permission to use the branding in their own markets in Cambodia and, hold your breath, Japan.

Then they accused her of ignorance and racist paternalism:

Maybe you should deepen your knowledge of Asia and the Asian psyche, beyond your rather activist style “I-am-going-to-protect-the-poor-asians-from-these-ruthless-snack-tycoons.”

This is a great example of the backlash that frequently occurs when power is threatened.  The company representative didn’t say “Gee, I’d hate to be racist, let me think about this” or even “I’m sorry you’re offended, but this is just what the logo is.”  He said, “You are the crazy person here. There is nothing wrong with our logo and how dare you even suggest that it is racist!  We are innocent and perfect with our Asian friends and you are totally out-of-line.  If anyone is racist, it is you.”  This is a common response when someone’s privilege is exposed: Everything goes along just fine until you ask for power relations to be reconfigured, and then you see the resistance.  For another example, see our post showing vandalized anti-rape posters.

Kirsti wrote back explaining calmly that their ties to Asian companies does not necessarily mean that their branding isn’t racist and that to suggest that there was a single “Asian psyche” (that is 100% behind their product) is, itself, kinda racist.

She said that the next letter was less accusatory and that he promised to bring the issue up with the board.

Sometimes, even in the face of backlash, collective action can work.

You can contact the peeps at Mr. Wasabi here.

What jerks! I think they need to receive a few more emails about how and why this is unacceptable. Apparently it's not a true problem if it only offends one person. I'm quite appalled by their response to her, really. How unprofessional and demeaning.

haha, WOW. I am actually amazed she got that kind of personal response, instead of a standardized letter sent by the company.

Everything is offensive to somebody.

Hey Kirsti, ever been to an eastern country? Ever been off the island for that matter? Heck, just look up some asian products online if thats too scary for you. This is pretty tame stuff compared to the products actually sold in countries like japan

Well in that case I guess it's OK to just say anything, anywhere, anytime, to anyone.

Your flip dismissal of the real hurt that words and images can cause is incredibly arrogant and obnoxious.

But thanks for the great insight.

Nice response field at the site - are you Mr, Mrs, or Company?

Why haven't you posted the whole correspondence? Is it posted elsewhere? Maybe I just can't find the link.

HOLY COW that was a nasty reply. It was probably written by some disgruntled guy in their PR department. :P

I'm tempted to email them just to ask if they're in the market for a new PR person.

What makes you think they have a PR department? Many smaller companies are run quite lean, and an import company like this is probably just a few people in the west who source goods from the far east. You probably got a response either from a secretary, or even a distribution manager or marketing manager. I doubt they were a thoughtful PR type.

I almost wanted to laugh at the company reply, (how unfortunate for them to be discussed on a platform like this as a result of their lack of foresight and consideration), but in all seriousness, I am impressed by Kirsti's effort, especially her response to the company.

These conversations have a way of derailing when realistically, it's not a competition about who is "more right", it's a simple request for consideration and thought in branding when dealing with a large and diverse market.

In a way I'm impressed equally by Kristi (who addressed her concern in a perfectly reasonable way) and by the company (which took the time to read the letter and construct a unique rant). Most of the complaints I've aimed at businesses and politicians alike have been ignored, met with an unrelated stock reply, or - worst of all - compensated with free shit I didn't want.

With all due respect to Kristi, it's a huge stretch to bill this as some kind of David & Goliath narrative - Mr Wasabi is not a big powerful oppressor, but rather a snack food brand. Hopefully those letter-writing skills are also getting used on similar brands that peddle trans fats, HFCS, and a whole chemistry set of carcinogens as "food."

Yay for fake language on the wall scroll at the website.

I have to admit that I'm surprised at how flat out rude the company letter was in response… they clearly aren't interested in their customer base if they respond to people's concerns with the same mocking tone of a 16 year old in a nic fit.

I'm surprised they were so mean, as well. I've never even heard of Mr. Wasabi, so he has no power over me. If one has a problem with a company, he/she is well within bounds to write to it explaining why. As for me, the greatest way I can exercise my outrage and empowerment is to not give them my money (I mean after all, the ONLY goal is to get my money), just like I do with every other company that I feel offends me.

[...] discrimination, and inequality.  We’ve posted about it in response to racist products (Mr. Wasabi, the Black “Lil’ Monkey” doll, and the Obama sock monkey) as well as anti-rape [...]