The Discovery Channel: “Not for Women’s Eyes”

Benno K. sent in a link to some ads he saw in the Netherlands for the Discovery Channel, which Benno describes as “the channel that used to be for science, but is now mostly explosions and motor bikes.” In both posters the men have “women’s” eyes–that is, they appear wide-eyed and long-lashed, with mascara: 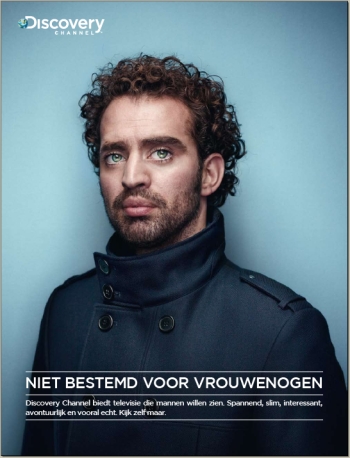 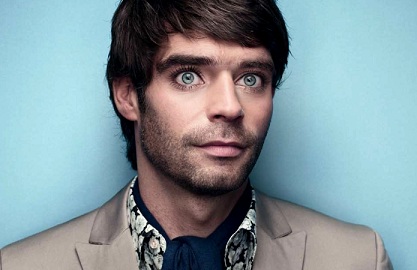 Not for women’s eyes. Discovery Channel has television men want to watch. Exciting, smart, interesting, adventurous, and most of all real. Watch for yourself.

I know that as a woman, I hate smart, interesting stuff. It’s just too hard to understand and it makes my brain hurt. I try to only watch TV shows that are dull, dumb, boring, cautious, and totally fake.

Do we know who shot these because they look a lot like the Jill Greenberg crying babies series...

So the message I'm actually getting here is "Discovery Channel will make your face look badly photoshopped."

I think it's also interesting that their eyes are very glassy and reflective, to the point where the bottoms of the eyes are a different color than the tops. Maybe they are making the statement that women's eyeballs, like the rest of their bodies, are made to be decorative and ornamental instead of functional.

As much as there's a lot of gendering in t.v., and every other medium, it's still kind of surprising when they go for an out and out "Not for you!" label. How exactly does by default halving your potential audience get to seeming like a good idea?

This kind of stuff also makes it extra annoying when male folk complain that women folk don't share their interests so often. Why don't "females under 18" rate up your sci-fi action movies? Because they're repeatedly told not to.

Another interesting part of this, it doesn't seem like it was that long ago Discovery Channel (in America) had a lot of design, and decorating shows.

Jeeze, and I thought the ads from the past few days were offensive. This is really the most insulting one yet. It's a good thing I already think the Discovery Channel is pretty stupid. But then, I guess it's just too advanced for my pitiful little ladybrain. In short: STFU, Discovery Channel.

This is insulting - I just, last month, bought a bunch of Mythbusters stuff from the Discovery Channel website for my boyfriend because we both love the show and have since been spending many hours watching the "Best of Mythbusters" dvd's. So, I guess they don't want me as a customer anymore? Ok, Discovery Channel, I guess you don't want me to like your shows anymore. I'll make sure all my female friends also know how you feel.

Incredible!
I can't say nothing more.
I assume this is because of my long-lashed eyes?
Who comes up with adverts seriously??

A New Trend in Advertising: Alienating Half of Your Potential Market « Kajed Heat — December 8, 2009

Discovery channel, sci-fi channel and History channel are virtually the only things I watch. Oh, and whatever channel features the aerial footage of stupid drunk people trying to flee the cops and plowing into stop signs. I love that channel too.

Maybe it's only me, but nothing is more certain of piquing my interest than being told "(Whatever) is NOT FOR YOU, because of (something gender-specific.)" This applies to clothes, books, foods, movies, virtually everything. For years I furiously mowed the lawn every weekend -solely- because I was told it was gender-inappropriate for me to do so. Likewise, being told that "(Whatever) is something you MUST surely like, because of (something to do with gender)" is the fastest way to ensure that I'll avoid it at all costs.

I doubt this is the angle they were shooting for with these ads, though. I'd be interested (no sarcasm here) in statistics showing exactly how much smaller men's eyes are, relative to their faces, than women's eyes, because otherwise the implication here is that unrealistically photoshopped facial features = women's facial features.

See, if it wasn't for the translation, I'd never have got that they were meant to be women's eyes. It looks more like "The Discovery Channel - Don't watch unless you're drugged out of your mind".

Also, admittedly I'm not sure what passes for casual wear in the Netherlands, but the models seem to have been chosen especially for the kind of looks - carefully managed stubble, salon faux-messy hair and stylish clothes (I mean, the bottom one's wearing a cravat, for goodness sake!) - which would designate "gay", or at least "metrosexual". Is this another gendered/sexualised angle of the advert - not only should you be not-a-woman, but you should also be manly/macho enough (c.f. yesterday's Docker's advert) to watch the endless "Men build stuff and then make it go fast/explode" shows* that now fill Discovery Channel?

* I love Mythbusters, but sadly, I have a horrible feeling that it was that very show that has led Discovery down its current alley of fail.

Here Here! How cathartic to hear others say so - the Discovery and the History Channels have REALLY gone downhill in the past few years. The robot wars and explosions and 30-minute descriptions of how Vlad's impalement stakes worked (or in the case of the History Channel, the wall-to-wall WWII documentaries) are tiresome and immature. History is still good for the occasional non-Hitler/WWII documentary, but Discovery is unwatchable.
Perhaps this advert is a little insight into exactly what the editorial staff at those stations thinks they're doing.

I once tried applying for a casting call for a scientist for a TV show and right after the closing date, they changed the description for host as "men only"! Seriously? Only men can transmit science to the public? Ahem, not everyone has to be Mike Rowe! Regardless, if that's what they want, then I'll never be it! And truthfully, I love a good explosion as much as the next person, that's one reason I'm in science in the first place.

And here I was thinking that there should be a program labeled "not for (some) men's eyes". The program would be broadcast in equal intensity red and green (or individual hues have same percentage red and green).

[...] is, in fact, a real advertisement for the Discovery Channel in Netherlands? According to Gwen at Sociological Images, this poster [...]

I've found many factual errors and skewed historical outlooks on many of the historical shows and series that Discovery Channel has produced.

It's not that well done but as far as I can tell it's supposed to be tongue in cheek, i.e. it's obviously ridiculous that women wouldn't go for interesting, adventurous, whatever shows, which is why the men have women's eyes. (cause it's not meant for women's eyes, get it? Yeah no, not that well done)

So I think you're all kind of missing the point here, which is that posters like this usually say more about the person looking at them than about the company making them. I bet you most Dutch people did get this one.

I guess I sort of 'got it', but it is a poor attempt at... whatever it was they were attempting. But I also think it's really silly to think this ad was being sexist on purpose... It reminds me of how some foreigners (esp. Americans) see Sinterklaas as a racist holiday (see: Zwarte Piet). Racism is really the last thing we would think about with regard to Sinterklaas's helpers.

I wonder if the Discovery Channel will ever discover womanism and feminism...

Selling to men by insulting women - The Pursuit of Harpyness — December 9, 2009

[...] to Sociological Images, the copy reads: Not for women’s eyes. Discovery Channel has television men want to watch. [...]

Sweet, I guess this just means I have man eyes! :D Since, you know, I spent most of last night with my man eyes glued to Ghost Lab and my man eyes can't wait to see the new episode of Dirty Jobs and Mythbusters. Dude, my man eyes RAWK!!!!11!!eleventy!!! :D Thanks, Douchecovery for letting me into this bit of knowledge! Is there nothing you CAN'T help me douchecover?! And damn douchecover looks weird. Maybe dickcover? Asscover? I just can't win in this game! Toolcover?! Argh! D:

I did some research, and I found this website: http://www.dawn.nl/#/work/discovery/factsandfigures

"Discovery Channel offers interesting, suspenseful television for men. And needed an equally suspenseful and interesting way to let them know this was the case. The idea: a series of arresting visuals, where women's eyes were inserted into men's portraits. The tagline is straightforward (we're talking to men after all): for men's eyes only."

The Dutch text is somewhat different. A loose translation:

"Discovery Channel is aimed at men. A lot of men don't know that yet. Something had to happen, in a way that is similar to the station. Smart, interesting, suspenseful. The idea: a series of arresting visuals, where women's eyes were inserted into men's portraits. The tagline is unambiguous: for men's eyes only."

Yeeaah. I still don't get it, but that's probably because I'm female.

I don't get why discovery channel wants to alienate a huge segment of the population with this ad. Wouldn't cathering to both men and women bring more viewers and hence more money for them? FAIL!

[...] The Discovery Channel clearly doesn’t appreciate the women who watch their shows.  Otherwise why would they put out such offensive ads? [...]

Why is it whenever the target audience is men, they think that dissing women will draw in more men? I guess this goes with how masculinity is always constructed in opposition to femininity.

But, seriously? Wow, way to alienate 50% of the population. I love Mystbusters, mostly because they have women on the show too. I guess they don't think that women who love science, like me, don't exist.

So i bet it's just a gaff... a nasty stupid gaff

My friend has a little problem, he is gay, he prefers boys, but does not know where he meets them. He was advised the site cupid.com, where gay men meet. For several weeks, a friend has been communicating on this site and he is madly in love with it. He finds many interesting and attractive guys there.