Flowing Data presented a number of figures revealing data about life expectancy (via).  It is well known that women live longer than men in Western countries (to age 81 versus age 76), but this graph, displaying the probability of dying in any given year, caught my eye: 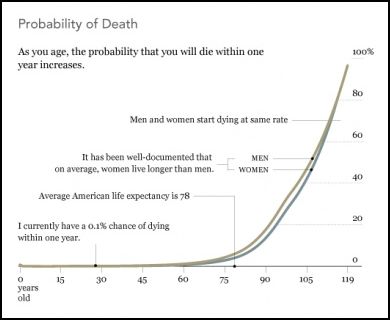 Men have a higher probability of dying than women in any given year starting (it looks like) at about age 55.  It’s a small difference (maybe 5 percentage points at its largest), but over time it adds up.  Until about age 112, when men and women die at the same rates.

Awesomely, even at 119, your chance of dying in the next year isn’t quite 100%.  And that goes for men and women alike. 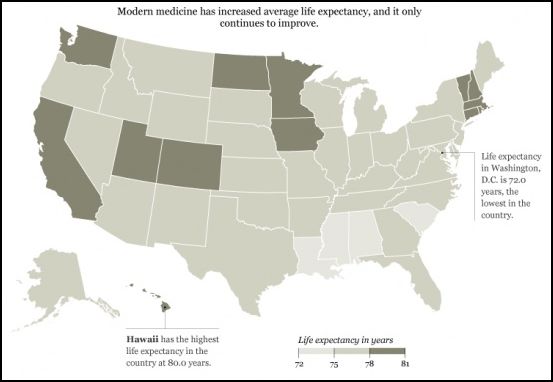 This is a little off topic but I always laugh when life expectancy is solely attributed to modern medicine. The single most important public health intervention is water and sanitation. Modern medicine is actually responsible for a lot less than we give it credit for. It is a good example of the strangely high status we give doctors.

A graph of probabilities cannot actually reach 100%, only approach it, unless it is a cumulative plot (which this one is not).

Angie, please stop calling the Americans "yanks". It is offensive.

Except that there's little evidence 'obesity', as you call fatness here, has a negative effect on life expectancy. The only significant drop (and even there, it's really not much) in average life expectancy occurs in association with the *very* highest weights, and the relationship is not likely to be causal (fatness at those levels is often associated with genetically based illness, and also significantly reduces the chances of being able to access adequate medical treatment within a fat-phobic healthcare system). The risk to lifespan comes at 'underweight' levels; whereas people in the 'overweight' category have slightly longer average lifespans than those in the 'ideal' category.

Also, the average weight in the US has only increased a small amount in the last several decades, largely due to better nutrition, increased average height, a reduced incidence of childhood disease, dramatically lower smoking rates, and, most of all, an increase in the average age of the population.

Also, yeah, even as a Canadian who is no admirer of US-style anything, I can say that your vitriol against Americans only makes you look like a fool.

I think that the greater life expectancy for females can be mostly attributed to the near elimination of maternal mortality. So due to that there has been a greater reduction in female mortality than in male mortality. Also the life expectancy between male and females was at its peak in the 80's, but has now been dropping, mostly due to the reduction of heart disease etc. (This is just for Australia, I'm not sure about figures for the US)

wasn't it in the UK that someone beat the crap out of a fat person for taking up two seats? And wasn't the fat shaming research about how much extra money fat people cost, and how much global warming is their fault done at the London School of Tropical Medicine. You are just full of fucking stereotypes and misinformation, aren't you? Are you the one that beat the shit out of the poor fat woman?

It's strange that this fatness discussion hasn't addressed Asia, yet. Why? What's interesting is that there is a stereotype of "thin Asians," as well. A few of my American friends were teaching in Japan where, according to their little students, "fat is terrifying." It's just a cultural thing that they don't eat a lot of sugar and they are predisposed to desiring thinness. Many non-asians see this and assume all Asians are skinny. But one of those friends then went on to travel and teach in China and throughout other places in Asia for quite a few years, and saw that this stereotype is a myth as well. In china, especially, it's apparently very difficult to even find a meal not smothered in oils or consisting of meats. The chinese food here isn't the same because it actually is healthier than the average chinese diet. "I'm surprised to say that fat chinese people are everywhere," according to my friend, and that's coming from an American abroad. So the "typical fat American," if it exists, isn't alone in the world. It's just another sort of stereotype that's gained prevalence over the years. I'm not even saying morbid obesity is healthy, but I guess for the average joe it's culturally defined as to what fat is, and how much fat is acceptable.

Hawai'i has the highest life expectancy, eh? Wonder if their progressive laws on health insurance have something to do with that... http://www.nytimes.com/2009/10/17/health/policy/17hawaii.html

This chart is misleading if you want to look at relative rates. Because it uses the same scale for all ages, from when the chance of death is under 1% to when it's over 80%, differences over most of the life are obscured. So it looks like, as the article says, that "men have a higher probability of dying than women in any given year starting (it looks like) at about age 55", but no. For example, 2.7 more american males than females die between 15 and 24, the age range for which the disparity is largest (http://www.allcountries.org/uscensus/120_death_rates_by_age_sex_and.html).