Are You a “Real Guy?” BVD Wants to Know

Chelsea S. sent in a link to the BVD website and its BVD MANual campaign. BVD is a brand of men’s underwear. The site has several tabs that let you “study” men in various ways. In the Chemistry section we see what men are made up of (larger version here):

If you go to the Sociology section you can take two quizzes. The first is about getting dressed (take the quiz here). If at the first step you answer that you are male you are taken to a second step that asks “model or guy?” If you answer model, you are directed to the female category. Once on the female track, you get to go through a series of questions playing on stereotypes of women and, apparently, men who don’t qualify as “guys”: 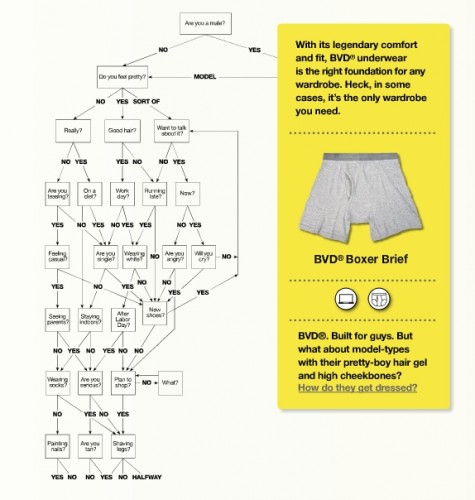 The second one is on being comfortable (quiz is here). In the second step you have to choose between “sensitive type”  or “guy,” and if you choose “sensitive type,” you go to the female section: 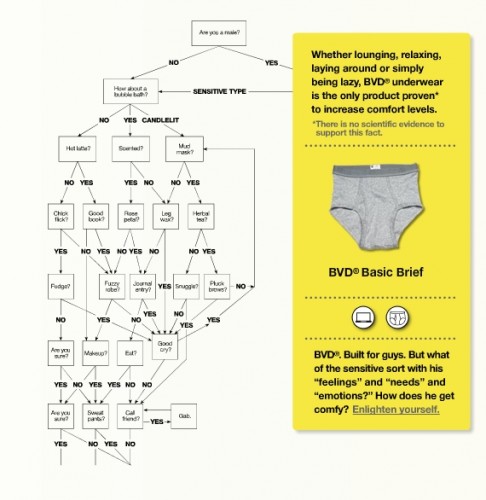 In both cases, at the end of the female path, the last question is “Wouldn’t you rather just be a guy?”

It’s a great example of the association of “real” manliness with obnoxious characteristics, while men who don’t meet the requirements for being real men are feminized. While real guys are stereotyped (they’re self-centered, obnoxious, and braggy), those characteristics are still preferable to being a “sensitive” guy with “feelings” and “needs.” And of course, it also denigrates women when being associated with femininity is a way of ridiculing men.

I tend to discount anything that uses the phrase "real man" or "real woman" and this is a perfect example why. Gender policing is one of the major things that ticks me off these days in popular culture because of how pervasive it is in promoting harmful stereotypes and making them seem legitimate.

Quiz 1: If you choose "female" from the start, one of the questions is "Plan to shop?" If you choose no, it redirects you back to the question with a box labeled "What?" and your only choice is Yes. Because all females like to do all day is shop, amiright ladies? Tee hee!

And now I can certainly say that I'm am fully proud that I've never bought BVD's in my life. Well the quiz thing and I find BVD's extremely boring.

Here, again, is this bizarre, inexplicable belief that taking any effort to be attractive to women makes you girly or gay. I suppose they think real men receive a pair of blonde twin hotties upon their twenty-first birthday, or something, and those loser models have to dress up and look hot to get their women? The logic used to reach that conclusion pretty much has to double in on itself and stick its head up its own butt.

What's funny is that, because by bashing models they've put themselves into a position where they can't use them, their underwear looks saggy and shapeless, like it's already been used and thrown on the floor. As much as men aren't supposed to care about appearances, I really think they do, and they haven't done anything to make their product look appealing.

If you go through the female portion of the flowchart and say No to all the stereotypically female options, the end question asks: Wouldn't you rather just be a guy?

Because there is only one type of woman, and if you are not that woman, you must be a man.

What a horrible quiz. If anything, it makes me want to boycott the company for reinforcing ridiculous stereotypes and sheer immaturity. According to this quiz, guys are unfeeling automatons who don't care about "girly" things like having nice hair or new clothes. The female half of the quiz is just as bad, because apparently not being completely stereotypically feminine means you might as well be a man.

The saddest thing is that this sort of gender categorization is so prevalent. According to a great deal of advertising, I fail being a "real man" or a "real woman".

Ha! I'm only laughing because the only time I've ever heard the term "BVD's" is in the book "Stone Butch Blues" by Leslie Feinberg. And that fact dovetails so perfectly with the question "Are you a 'real' guy?"

I thought it was just me, but on Wikipedia, it's also mentioned. Ah, the irony. http://en.wikipedia.org/wiki/BVD

This is progress, in a bizarre way. We're finally realizing that feminist models of masculinity - boneheaded obnoxious machismo on one hand, and castrated sensitivity on the other - are absurd.

My memories of this are hazy, but I seem to recall that for a while, "BVDs" was the generic term not simply for men's underwear, but for the "tighty-whitey" style in particular. BVDs were considered somewhat lame. This was around the time when boxers and boxer briefs were becoming popular (early 90s), and tighty-whiteys is what your mom bought you. They were uncool. I always got the impression that the shapeless sagginess of them, especially in the butt area, was what made them lame. (Again, they were going for a Marky Mark look.) And yet, a guy couldn't go too far, lest he fall into "Speedo underwear" territory.

I'm not a guy so I wasn't really paying attention, but for a short period, it seemed like the parameters for male underwear were really strict! So much so that it even filtered to me, a girl. Then again, it was high school.

(And maybe it's worth noting that it was a school seething with class issues. It was a an elite "semi-public" school, located in a super-wealthy area. For half the kids, it was their automatic district school; the "other half" (pun intended) had to take a test to be admitted, and came from long distances. So it's possible that displaying Calvin Klein underwear in the boys' locker room had a somewhat different meaning there!)