Amanda C. caught John McCain with some interesting presumptions! The contact part of his webpage has a drop down menu for the senders’ honorific(s) (see a close up below): 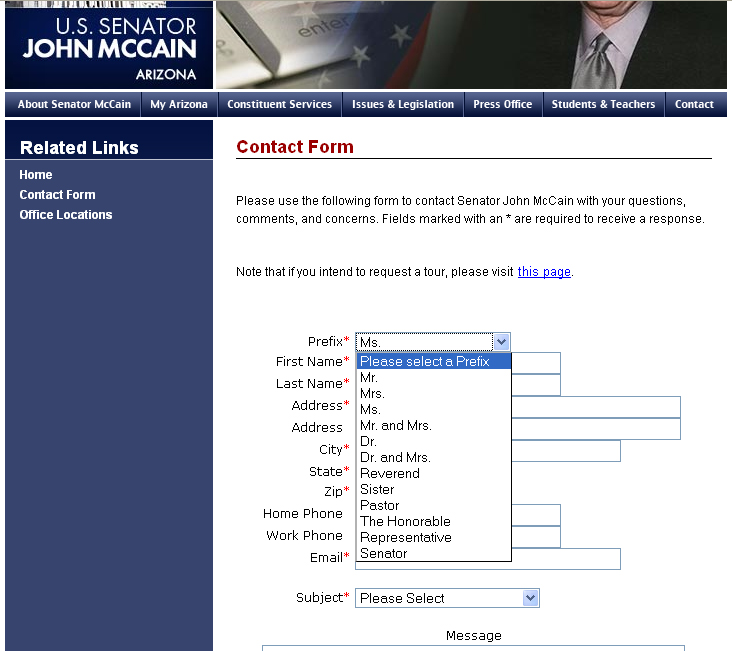 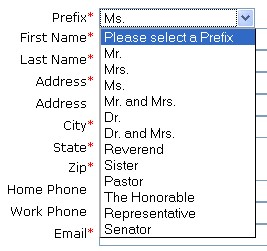 Further, because no write-ins are allowed, it also forces people who aren’t gender-typical to choose a gender if they want to send McCain a note.

UPDATE: After seeing this, Danielle F. sent in a screenshot of the honorifics choices that came up when she ordered tickets to “The Nutcracker” at the Detroit Opera House: 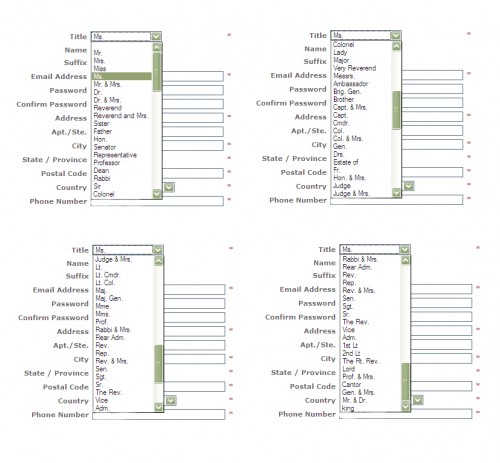 So you could theoretically be a single female Rev., Col., Capt., and so on, but the married versions of those all assume a female spouse. Notice they also have a listing for King, but not Queen.  I guess they get a lot of male royalty at the Detroit Opera House.

I think I'll go with Reverend.

well, in their world, them types of people don't exist, so why acknowledge them? I mean, I'd be surprised if the had...

I think at that point you pick them at random. My brother was picking prefixes for a very fussy hotel in Victoria and I think he ended up picking Shah or Lord or something. On their internet form! I couldn't imagine that anyone with a title like President would be doing their own internet reservations.

Make yourself a senator!

It's an odd list all round; you can be 'Sister', but not 'Brother' - McCain is expecting nuns but not monks? And I can imagine some Republican ladies are very firmly 'Miss' which is also not on the list.

I had to look up the use of 'Honorable', because it's a UK aristocratic title and I was wondering why he was currying favour with British toffs! Wikipedia says it's for ex-presidents - does that mean he has a drop-down list category for four people? At least two of whom should have better ways of contacting him than his website's contact page!

Or more, less that women doctors don't exist... more that no real Man would marry one? (Since single women doctors are accounted for.)

"Honorable" is also used (un "officially", whatever "officially" means) for judges in the US.

I'm not sure it's fair to single McCain out, especially since he undoubtedly had nothing to do with this. If you look through other Senators' contact pages, even among the Democrats (Feinstein, Leahy, Reid) they can be heteronormative and/or sexist. Furthermore, what's pretty interesting is that he doesn't have any military rank options. Snowe's website has pretty much every conceivable pairing (Dr. and Mr., Mr. and Mr., Rev. and Mr.,) along with military ranks.

It's just so bizarre -- why insist on making someone choose from predetermined categories instead of writing in their own? Why go through the trouble of making an exhaustive list, unless you're afraid that someone may write something that makes you uncomfortable?

I think people are missing the obvious issue here: why have a "person and person" option at all? It tends to remove the autonomy from one member of the couple. Both people deserve a voice, and to couple them together cuts the "volume" of their voice in half.

I think that's the reason that there's no "Dr. and Mr." - because even if a woman is a doctor, it would be almost unheard of for a heterosexual couple to go by "Dr. and Mr. Jane Doe" as opposed to "Dr. and Mrs. Jon Doe." It's a custom I'm intensely uncomfortable with, and I'm certainly not defending it, but I think that they're assuming that if a heterosexual couple is going to elide one person's name, it will be the woman's.

That doesn't explain the lack of "Dr. and Dr." or the (sadly unsurprising) heteronormativity, though.

There's also no "Dr. and Dr.," which I find to be additionally disturbing.

Actually, when I was working for a non-profit, many donors typically liked to be acknowledged with their first names or nicknames, so for example instead of "Dr. and Dr. John D. Smith" they preferred "Mary and John Smith" or the like.

I do enjoy that in those informal addresses, the woman's name comes first.

My school could never get it right with one girl's parents - her mum was a doctor, her dad wasn't. Even more surprising since it was a highly academic private girls school.

On the update - you can specify whether you're a 1st or 2nd Lt? That's some specific addressing there. I mean, unless they get a lot of situations where they're sending opera tickets to bases or ships that have multiple 'Lt Jones' and being more specific in rank is needed?

And their 'king' doesn't even have a capital letter. Most kings don't get out of bed for less than "His Majesty, King Bob"!

Am I reading that wrong, or have they split 'Vice Admiral' wrong, so you can just have 'Vice' as your title?

They're both sexist, naturally, but there's a big dose of 'just plain odd' in there as well.

There's also the issue of missing some Catholic titles (Bishop, Abbot, Abbess, Archbishop, Cardinal, Primate(*) and so on), and ignoring any religion other than Protestantism, Catholicism and Judaism. They don't even have Orthodox Popes or Patriarchs.

Then again, I guess once you make a vow of humility you should be content with Brother, Sister or Father, and the Dalai Lama is above such vanity too :D

(*) Even if all of us H. sapiens qualify for primates, anyway.

These websites most likely feed the webform information into CRM software (http://en.wikipedia.org/wiki/Customer_relationship_management#Market_structures) that helps the campaign manage the email submissions and responses. These systems may come with a pre-defined set of honorifics that the website must use.

It's still an interesting question (why would the CRM systems choose that specific set of pre-selected honorifics?) but not one that the sponsors of the website would necessarily be able to answer, and they may not have control over the list, particularly if they don't have a budget for customizations in the CRM.

Don't forget the oddity of requiring an honorific at all. It's nice when you make the offer but rude when you demand I make a choice.

A more subtle oddity is the absence of a recognition of multiple honorifics. Maybe we don't have "Captain Doctor Smith" here but don't other countries stack them when a person is entitled to multiple titles? I could see a foreign correspondent being put off by the demand to pick just one.

The really sad thing is that a democratic republic (such as it is) uses titles of any kind. And don't get me started on calling ex-presidents "President"!

This is so silly of a complaint. I mean geez you really have to be on the lookout for things to be offended by. Some intern probably configured the software so I wouldn't read too much into this.

Though if you want to make a substantial observation about McCain and Gender, this is a gem I remember reading from last year:

‘Now is the time to keep the promise of equal pay for an equal day’s work,” Democratic presidential nominee Barack Obama said August 28 in his convention acceptance speech. He told the crowd in Denver: “I want my daughters to have exactly the same opportunities as your sons.”

Compensation figures for his legislative staff reveal that Obama pays women just 83 cents for every dollar his men make.

Why this disparity? One reason may be the underrepresentation of women among Obama’s highest-compensated employees. Of Obama’s five best-paid advisors, only one was a woman. Among his top 20, seven were women.

On average, according to these data, women in John McCain’s office make $1.04 for every dollar a man makes. In fact, ceteris paribus, a typical female staffer could earn 21 cents more per dollar paid to her male counterpart — while adding $10,726 to her annual income — by leaving Barack Obama’s office and going to work for John McCain.

How could this be?

One explanation could be that women compose a majority of McCain’s highest-paid aides. Among his top-five best-compensated staffers, three are women. Of his 20-highest-salaried employees, 13 are women. The Republican presidential nominee relies on women — much more than men — for advice at the highest, and thus, best-paid levels.

Here's an idea... Since the "honorific" field is essentially meaningless, why not let people type whatever crap they want in there?

A friend noticed the same problem when she was signing up for a membership to a Chicago-area museum (I forget which one). Dr and Mrs, and Drs, but no Dr and Mr. As much fun as it is to poke at the Republican for doing it, even an institution that presumably employs many PhDs (and probably quite a few of them female) did the same thing.

Though I think the Nutcracker list is slightly overkill... At that point, just give people a blank to fill in, really.

And by the powers of heterosexism, sexism, and oversight combined, the list covers female doctors married to women!

The McCain Web site has employed write-in boxes before. With the number of (combinations of) honorifics, it really would be the best option.

The link for the large version doesn't seem to be working - I'm getting a link to GMail with a message telling me to sign into "my Contexts Magazine account".

I work at a church with a female minister. I cannot tell you how much mail we get addressed to "The Pastor's Wife". Invitations to Rev. K___ and wife. Etc. We always reply that Rev K is unable to attend, and that she is currently single and heterosexual. However, should either of those conditions change, they'll be certain to attend. :)

More than likely the grocery lists of honorifics were built into whatever databases were being used to collect information from the websites. Yes, it would probably be fairly simple for a database administrator to add to the list, most systems such as this are not overly customized before they deploy. They are usually deployed as quickly as possible, with minimal testing. If changes are made after the system is deployed, the system administrators risk invalidating data that was collected before the change.

Note that there is not room for two names. The reason & Mrs. is even an option is because the woman is conveniently erased. It wouldn't work with a Mr. and Mr. because who would be erased??? Sure you could put two names in each box, but that would really confuse that heck out of their database software. There is no way to write as a couple if half of that couple isn't being erased.

On the topic of clueless databases, I am registered with my alumni association as Ms. Myfirst Mylast. I added my husband to my profile as Mr. Hisfirst Hislast. Received an invitation to an event for Mr. & Mrs. Hisfirst Mylast. ?!?!?

Interesting that only one comment (antigone's) mentions the most interesting part: the erasing of one member of a couple (inevitably the female member of a heterosexual couple).

Another interesting point is that it's a contact form - why is it asking for the names of one/two people? Most likely it was only one person who made the query, and if it was more than one person, what's the chance that somebody would make the query with their spose? It's equally likely that one could be making the query with a business partner, a friend, parent, etc.. I don't know about America, maybe it's a hobby to contact senators with one's legal spouse.

Don't you think this is getting a little out of control?

Straight Women are Women, Gay Women are Gay, and All Women are Men » Sociological Images — January 22, 2010

[...] at Sociological Images are having fun with forms lately (see here and here). This time the fun is thanks to Bri A. who sent us some screen shots from the website [...]