The Economic Policy Institute defines a “good” job as “one that pays at least 60% of the median household income and also provides health care and retirement benefits.” Based on that definition, here is a breakdown of men holding good jobs in 1979 and 2008, broken down by race/ethnicity (with Native Americans and Asians unfortunately absent): 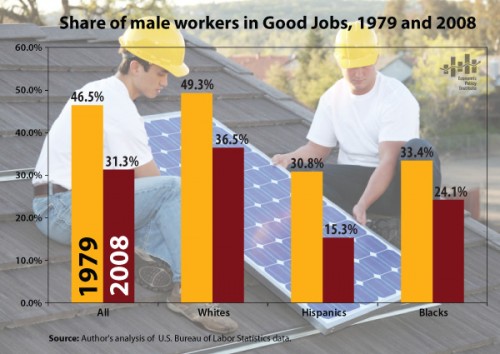 Notice the clear decrease in the % of men in each group in good jobs between 1979 to 2008. The racial pattern is also striking, if not surprising, with Black and Hispanic men being significantly less likely to have a good job than White men in both 1979 and 2008. Notice the particularly large gap between White and Hispanic men in 2008–over 20 percentage points.

Hispanics have been disproportionately smoked in the past twenty years, with a 50% decrease. Compare this to 26% for whites, and 28% for blacks. Something is going on there.

This is an odd definition of "good" job. If more women entered the workforce, and men's wages didn't fall at all, then fewer men would have good jobs because their earnings would be less likely to surpass those of an average household. In fact, that *is* what happened, which is why fewer men appear to have "good" jobs in the graph.

This is really a family wage model - a good job is one that enables a household to have one earner - even specifically a man in this case (or have two earners - and be rich, relatively speaking).

Wow, notice all of the downward sloping lines in the background graphic! I think they played strongly into my initial impression of this graph, which was "downward trend in good jobs over time." In fact, the x-axis is separated into categories and the downward trend in each is just two data points. As it turns out, the data do seem to indicate a pretty clear downward trend (although no error bars, so can't be sure), but I'm disturbed by how much the background graphic influenced my judgement of this data. Will have to start looking for this data presentation trick elsewhere...

I think a large part of the decrease is due to the fact that as we now generally assume 2 incomes in a family, each worker only needs to bring in 30% of the median to total the household income considered "good" in 1978.

Philip is right. As female labor participation increases and gender income inequality decreases, the number of "good" jobs for men will automatically decrease. Presumably that would not be a bad thing, right?

Yeah I was struck by the same thing as Philip and Jesse. This definition of "good job" presumes that men should be the main breadwinners. It's not the only thing affecting it, but it does confound things a bit.

Still, I like that they represented a good job by showing men installing a solar panel. :)

I found myself wondering what was up with the huge drop, and whether it was gender related... that is, were men losing those jobs and women getting them instead? But then I realised that the "provides health care and retirement benefits" might be a huge factor in this. We need to know how many of *all possible jobs* are good jobs, and see whether the number has decreased in the past 20 years. I'm guessing it has because of the heath insurance and retirement benefits factor.

[...] and racist policies of the United States has already been well documented, but I do want to share this chart, which simultaneously illustrates the rise in poverty and unemployment across the board, but [...]

What does "retirement benefits" mean? I have a job that pays well over 60% of median household income and health insurance, but like the vast majority of Americans I have no pension and while my company offers a 401(k) it does not contribute anything towards it (or any other retirement plan). Does that count as a "retirement benefit," any more than deducting social security taxes does (which all jobs do)? I could get that benefit at McDonalds, so while I'm sure most people would consider my job good I wonder if it would technically qualify.

Umm...If they are basing "good" on median income then it can only improve through economic leveling. If everyone's income improves, the stats will stay the same. Odd measure.

Also, the literature on flow, money, and happiness suggest that a good job is anything in which you can lose your sense of self. After meeting basic needs, more money doesn't lead to more happiness...and that seems like a pretty good endpoint.

The major reason for the massive drop in the number of Hispanic males in "good jobs" is the significant increase of Hispanic males in the USA. In 1980 alone 100,000 Cubans were allowed to leave Cuba and seek refuge in America. Immigration of Hispanics is on the rise, in 2005 there were an estimated 10.9 million, a number expected to increase to 60 Million by 2020.

A significant majority of immigrants from South and Central American countries have limited English skills, are under educated and often lack skills to work in "good jobs" in the US.

Obviously the disparity is unfortunate and startling, however, can be explained by historical factors regarding immigration and percentages in the US population over time.

[...] of college grads, joblessness by race/age/sex/education, more on joblessness, race, and education, men in “good” jobs by race, race and the economic downturn, changes in type of work over time, gender and the wage gap, trends [...]