The Economic Sociology of Triathlons

Triathlon is the new Golf: As a young lawyer making a name for himself in the mid-seventies, my father’s superiors told him to “pick up golf” as a way to rise quickly within the firm, and to land lucrative clients. It’s still all about who you know, but if you want to get ahead in business today, don’t hit the putting green, sign up for an Ironman. Why?

Like Golf, Triathlon is cost prohibitive: The average annual income of an Ironman participant is nearly $160,000, while the average golfer makes a measly $100,980 a year, according to Golf.com’s 2009 Survey.

With Ironman entry fees upwards of $500 each (plus the flight and lodging expenses associated with destination racing), a decent bike starting around $3,000 (plus $400 for the shoes, helmet, peddles and accessories), $200 for swim, bike and run gear, and $300/month in coaching and facilities fees; you start to understand the need for that extra $60,000/year.

Not only are triathletes more driven, they’re also younger. On average, Ironman triathletes are 35-44, while avid golfers are generally in their early 50’s. Consequently, triathletes are at the peak of their professional careers, while many golfers are contemplating retirement, and thereby less effective in helping you infiltrate the network or company of your choosing.

Triathlon is a better way to schmooze (on a Micro Level): Now that you’ve drawn all of the rich, hard working, high powered individuals into one sport, it is time to make connections. Typically, only four players participate in a round of golf, which takes around 4.5 hours. You likely know at least one or two of the other competitors if you’ve been invited to play in the first place, so you’re left with at best two networking opportunities, which isn’t an efficient way to find the right contact for you.

Most of the Multi-Sport fitness groups in my home town (Marin County, CA), host weekly group rides, averaging thirty to fifty participants. The group usually covers seventy miles in a given ride, thereby providing five hours (plus a group brunch) to make friends, and connections. The group usually breaks into smaller packs of evenly matched athletes after a ten mile warm-up. As competitive, Type A folks, multiple members in a given group will eventually ask you how old you are, what team you belong to, and what you do (probably to ascertain how much time you have to train, how long you’ve been serious about the sport, who coaches you, and what if any advantage your bike may provide you).

It is during this hierarchical ranking process that you establish dominance over the somewhat older, not-as-fast man on the really expensive bike. He may be the CEO of a major tech company in Silicon Valley, but that is the professional “Pond” (Frank, 1987) or “Sphere” (Putnam, 1995). Right now, you’re both in the triathlon sphere, where you’re fitter, faster and had a better time at Ironman Canada last year. As Frank noted, it is relative status that creates happiness and satisfaction, and in this pond, your status is higher than his.

So, for the remainder of the ride (and during brunch afterward), he picks your brain about triathlon, and you arrange to have lunch with him at his office next week, a networking win you’d never enjoy if you’d attempted to engage said CEO in the professional Sphere.

Triathlon as a character reference: Not only have you now procured a meeting, you’ve already passed the first round of the interview process. The ability to withstand (and even enjoy) suffering is a form of ‘bonding social capital’ (Putnam, 2001) that forges a strong sense of collective identity. It implies a preference for achieving work-like goals in the leisure sphere, which translates seamlessly into a strong, professional recommendation from your new friend, the high powered CEO.

Triathlon is a better way to schmooze (on a Macro Level): There is no other sport in which every race includes Professional, Amateur and “Age Group” triathletes from under ten to over eighty, separated only by “wave” times, which are determined by age and gender. As Bob Babbitt, publisher of Competitor Magazine put it: “I can’t pitch to Barry Bonds or tee off with Tiger Woods, but I can be on the starting line with the top people in triathlon.” Consequently, you can train, compete and network with individuals of all ages and abilities, from around the world.

Triathlon is a reciprocal Panopticon: Your athletic club affiliations are declared on your uniform, and your age is written on your calf prior to each race (so you can check the legs of everyone you pass and everyone who passes you, to estimate ranking in on your age group during the actual race).

Your relative time and ranking is posted within minutes of completing the race, so all can see where you fall amongst the 2,000 or so athletes who participated that day. Award ceremonies are performed immediately, and results are posted online within 24 hours. You can even look up their participant’s photos!

Basically, Triathlon is a Panopticon (Bentham 1995 [1785]; Foucault 1995 [1977]), in which everyone is given the role of prison guard and prisoner. You can’t hide anything about yourself, but in turn, you know everything about everyone else. 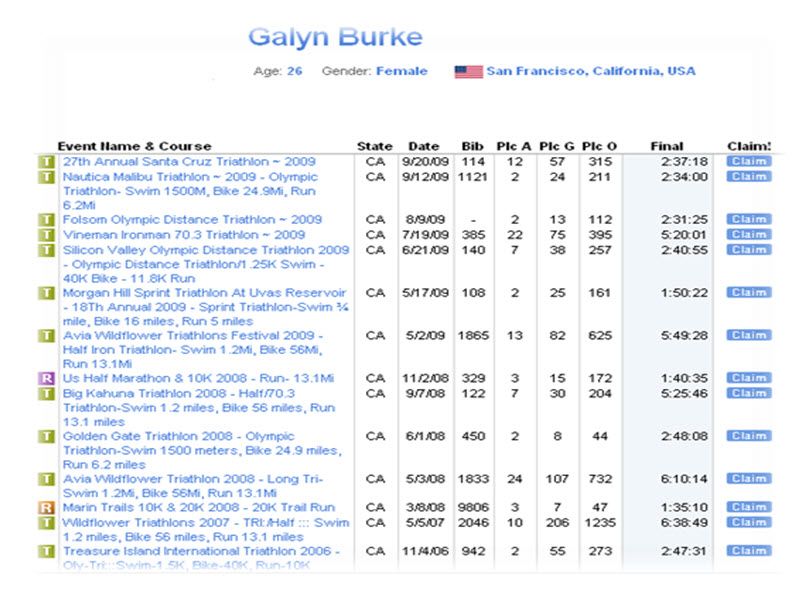 Bentham’s Panopticon: A theoretical prison that allows guards to observe (-opticon) all (pan-) prisoners, who can’t reciprocally tell whether they are being watched:

Conclusion: Triathletes are a self selecting group of affluent, highly motivated individuals, who spend countless hours forging bonds through the competitive, grueling, and socially cohesive ritual of endurance athletics. The greater community convenes several times a year to establish relative rank by sex, age, casual, amateur and pro standards. With access to the region, age, gender and past performances of every athlete in this group, Triathletes are “tee’d up” to make local, national and international connections that turn into husbands, wives (38% of Triathletes are now women), employees, employers and friends. In a world where it’s all about whom you know, it doesn’t hurt to know the rich, successful, driven group that is Triathlon.

Galyn Burke–Brown, formerly a competitive equestrienne, is now an enthusiastic triathlete.   She blogs at Economic Sociology.

This is all good - and true :) - and one interesting statistic that I don't have is female participation in the sport as the distances get longer. If you look at the sprint distance races, there's women-specific races and mixed-gender races dominated by women. If you look at Ironman, it's 75% men, and when you're in one of those races, you feel it. If you tie that with the golf/where work is done theme, it's just one more way women are left out.

$6000 for a bike? If these guys really want to shmooze with the rich, they should take up horse showing. A quality show horse STARTS at $40,000.

colby, you're completely wrong about this. Women are actually better suited for long-distance sports than men and most certainly can compete with them. I've done 3 Ironmans (on the budget of a grad student, by the way. I coach myself, have a decent bike, and race locally) and always beat a good amount of men. Nothing better than passing some full-of-himself man on the bike and run!

As if golf as a career-boosting networking activity was not already effective enough in excluding people with disabilities, and those (read: women) with family commitments that preclude much time for training/playing, from the upper echelons of the business world, triathlons as the new 'prestige activity' certainly ought to do the trick. It's rather frightening how the conflation of physical activity (or cultural signs widely, if mistakenly, thought to indicate such -- i.e., fatness and thinness) with (non-physical) professional competence seems to be increasingly widespread.

Of course, this is just another way the rich and idle have self-selected their sphere of friends, prohibiting anyone who isn't single-mindedly athletic, wealthy, and able bodied from breaking into their level.

I think it's funny to note that in all the places I've worked where people could be promoted to manager or higher positions before 50, at least 70% start "training" for marathons and triathlons.

Of course, this cultish behavior is silly. Athleticism has little to nothing do with the qualities that people need in their jobs, unless their jobs actually require physical fitness. Considering that such physical jobs (such as firefighting, construction, and such) are not corporate or pay well enough to participate in this culture, CEOs and high-ranking managers who give the best positions to people that impress them with hard abs and bikes costing as much as cars are basically promoting people based on qualities that have nothing to do with the work at hand. This behavior, of course, is incredibly self-serving and privileged.

I could also recall from past jobs that people that "started training" instantly starting rubbing elbows with the higher ups, while the rest of us poor slobs could work long overtime and do things actually required and relevant to our jobs and be totally overlooked.

What also bears mentioning is that most of the people who "started training" were single men or men with stay-at-home wives. The few women who did the same were all single and childless. Just another hurdle for women with children, especially single women, can't overcome.

The worst thing is how this behavior disadvantages those who aren't as able bodied. Anyone with even minor health issues--like weak knees--can't do this kind of stuff without hurting themselves.

The over-35 set of rich able bodied (they tend to be the smug organic types who think that everyone else's fatness or health problems is all their own fault) men really don't need another excuse to create insular communities disadvantaging the less wealthy, women, mothers, more elderly coworkers, and the disabled for no rational reason given the qualities actually needed for their jobs. Yet they all jump at the chance.

This article has inspired me to vomit.

I am an art student wanting to try my first tri this summer. This article took me aback, because I have never thought of them like this. I am not rich, and I am not trying to win. I have always wanted to try one. Hope this doesn't make me a jerk!