Cute Bruiser brought our attention to some Halloween costumes for girls that illustrate parallel trends. Her pictures are from a Shoppers store in Canada. 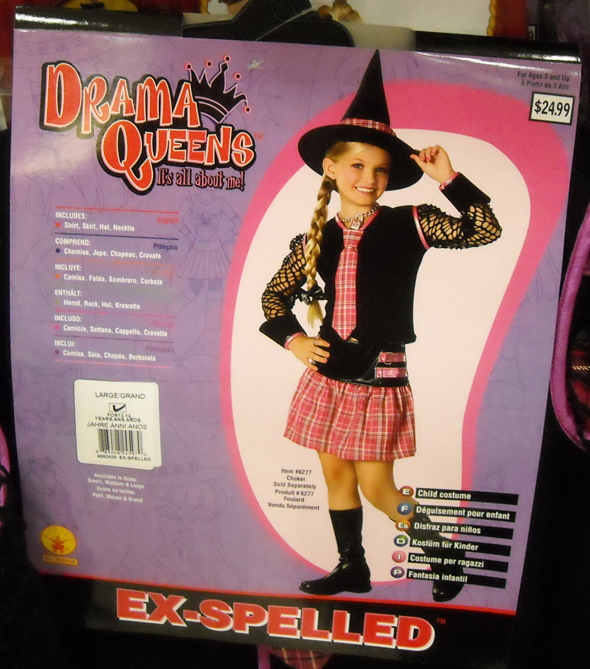 (I know, that costume doesn’t even make sense.)

2. The sexualization of young girls. In this case, The Ravager from The Covenant: 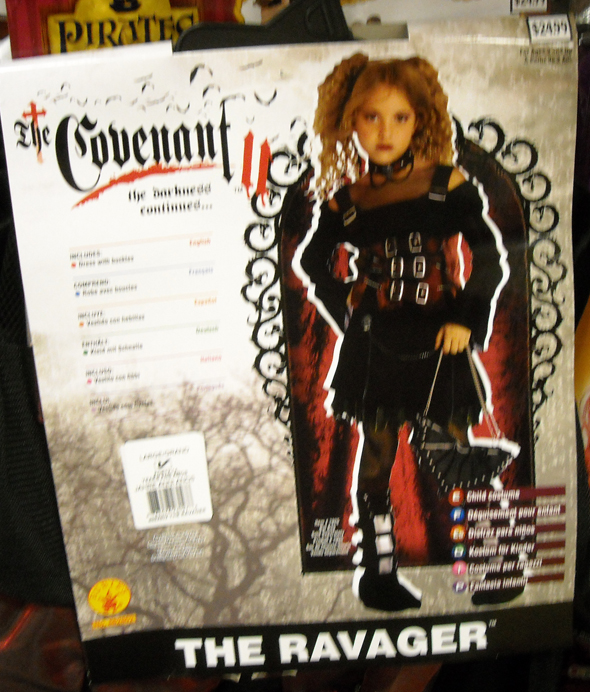 Since that’s a little blurry, here’s an image from a website: 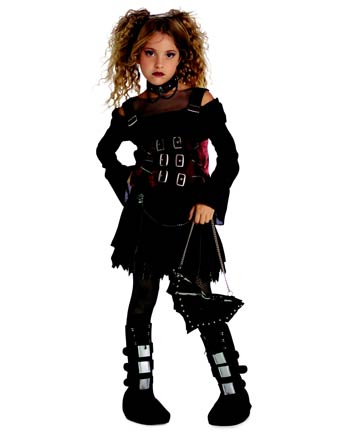 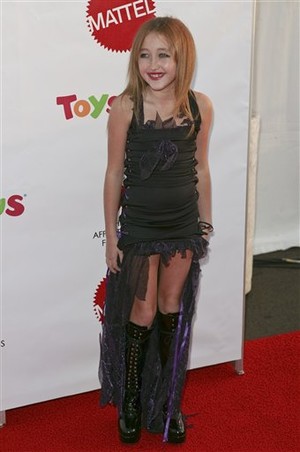 the Covent/Goth costume really doesn't look sexualized to me. but Miley Cyrus's little sister... oh my god. You know paedophiles everywhere are excited over that.

There are scads of sexualized outfits for girls out there, and of course the most traditional girl costumes are, well, witch and angel. (I'm thinking Charlie Brown's Halloween-era costumes. Not a lot of female monsters in the archetype pantheon.)

OTOH, here's the list from the front page of a US-wide Halloween store's girl's costume selection:

www.spirithalloween.com/girls-costumes/
(Not endorsing, they just popped up first in a search.)

None of these are particularly sexualized. None of them are any more wicked/bitchy in nature than those on the corresponding boy's page:

Seems like a manufactured sense of outrage. The vast majority of kids' costumes are fairly inoffensive. A few are oversexualized. And - amazing! - a child star is already being primped/pimped as a sexualized product at age 9. Looks like we can't look to Hollywood for moral guidance anymore... What a shocker.

I don't see the Ravager costume as sexualized. I think it's cute. I'm not sure a child that age would buy that for herself, though, as it seems to take a certain amount of self-awareness to wear something that rebellious.

Many of the Drama Queen costumes also seem to sexualize young girls. You can find a list of all of them here:

The ones that most illustrate the point for me are the "Miss Behaved," "Major Flirt," and "Devilicious" costumes. To me, it's more about the costume-names and the posing/stance of the girls modeling the costumes in the pictures, than it is about revealing clothing. (There's something about the ankles angled inward that screams "dumb and sexy" to me.)

I think that, for me, I'm convinced there is sexualization and labeling of young girls though the offerings of costumes. Specifically I've seen how people are saying the sexualization is not there. There are a few reasons that I can't let the costumes slide. Excuse me if I ramble, please.

1. These are often the only kinds of costumes marketed for girls. Good luck finding an astronaut or soldier costume with a girl on the front, and if you find one, I doubt she'll be in actual astronaut or soldier clothes. I don't often deal in implications, but in this case, the sheer unavailability of non-gendered costumes for girls implies that these are things little boys want to be by nature. I feel it's actually a product of socialization, and would therefore like corporations to take more responsibility in the socialization of children.

2. Little boys' and little girls' bodies are the same shape. It seems like it's being assumed that if a girl wants to dress like an astronaut (that being my pet example for now) she should simply buy the boys' costume. In direct correlation with that, if a little girl doesn't want to show skin, she will also typically need a boys' costume. Not only does that encourage male as 'default' but it is not a reversible principle. If a boy wants to dress as a ladybug, he would have to wear a skirt. That's because boys' costumes are not gender-specific in clothing style, and girls' are. But often the only real differences are that the girls' costumes are unnecessarily skin-baring. I feel that this is a good argument for sexualization.

3. Children don't manufacture these costumes. Many girl-only costumes are of characters that that often already colloquially derogatory when applied to grown women and not to men (witch, princess, scary bride). They aren't aspirations or fantasies - they are strange representations of adult attitudes about gender. Otherwise the entire look would be a fantasy look. But instead, the makeup is that of a grown woman.

5. If it were all dress-up, none of this would matter. Boys and girls often enjoy separating themselves from one another, especially when it comes to dressing up. But these are real little girls wearing real outfits, showing real skin and being viewed by other real people. They're asking how to separate themselves, and this is what we're telling them. There is no reason whatsoever to gender many of these costumes. There's also in my opinion a disempowerment, as there is a certain dignity associated with being able to cover one's body. But this is further proof of why so many academics, etc. feel that women's sexuality is being sold to them as power. Because when we explain to children what it's like to be their gender and to be a grown-up, we include this caveat for little girls that sex appeal is part of the basic requirements.

"Looks like we can’t look to Hollywood for moral guidance anymore". Joe, it's not about you as an adult looking for moral guidance from a bunch a greedy producers and talentless hacks (forgive the ad hominen), it's about kids who look at Hanna Montana/Cyrus getting the attention when she dons a blond wig, and of course posing in racist pictures mocking her asian "friend" in real life.

Probably the wrong blog for this comment but-
Noah is a boys' name.

Well I guess it isn't, because here we have a girl who is named so.
But, Noah is also a name derived from a word that means something, and Billy Ray could have taken the feminized version if he was trying to capture the meaning of the word and the name.

Or maybe he just wanted to give his kid a silly name devoid of any meaning, like other celebrities.
Too bad for the children.

Thanks for the tip Joe
Try sleeping with an extra pillow tonight. You might not wake up so angry tomorrow morning.

Watching the kids in our neighborhoods this year was so refreshing... didn't see one girl dressed in any of those costumes. In fact, this was one of the most creative years ever in our part of the country! Girls were dressed like military personnel, witches, vampires and lego blocks, cakes, presents, really clever "punny" costumes like "smarty pants" and "blind referee" and more!

Here's to our girls! They rock. The people who made those costumes don't get tween girls. Or tween girl parents. I hope they had lots of leftover costumes in their inventory.

Next year - come up with some cool costumes, please!