Several stores, including Target, Walgreens, and Amazon.com, offered an “Illegal Alien” costume for sale.  The costume, which includes a orange (prison?) jumpsuit, a green card, and a space alien mask, conflates undocumented immigrants with aliens from outer space. 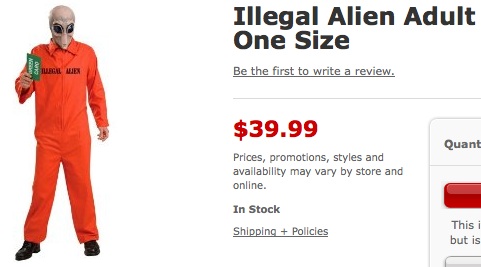 After a round of criticism, Target pulled its “Illegal Alien” costume from its shelves.

I honestly find nothing offensive or racist about this costume. and I'm the one who's very outspoken against racist & sexist costumes on Halloween.

I don't think this one is offensive at all. It's just a joke on the terminology "illegal alien." Instead of it being an undocumated immigrant, it's a crime-comitting extraterrestrial!

really? You really see this as a conflation of "undocumented immigrants with aliens from outer space"?

Cause I see an entertaining result of taking a bad verbal pun to a ludicrous extreme.

I think it depends on who's wearing it and their intentions.

It could be seen as pretty subversive; the phrase 'illegal aliens' while the correct legal term (i think?) can be used a pretty dehumanising way, when combined with the hysteria, (and often racism) around immigration, and I can see the costume as sort of mocking that.

as someone formerly dubbed a non-resident alien working within the united states, I find that this costume portrays the absurdity of using the same word for merely a foreigner, while still a member of the same species, as for non-human beings from outer space, at least in popular culture, something that has always bewildered me. And because I see that statement made in it, I could wear it to a party, and at least my friends would know what I mean by it.

If it's illegal, then why does it have a green card?

Apparently the woman's version of this costume involved a minidress... Ug.

And yeah, if you have a green card you're legal.

I was vaguely hoping to run into someone wearing this and ask them exactly which planet they were from that thought dressing up like that was acceptable.

A shop near my house was selling just the jumpsuit, no card, no mask, which IMO is even worse.

[...] for its removal.  Popular blog Sociological Images broke down what was wrong with the costume, saying: Several stores, including Target, Walgreens, and Amazon.com, offered an “Illegal Alien” [...]

[...] for its removal. Popular blog Sociological Images broke down what was wrong with the costume, saying: Several stores, including Target, Walgreens, and Amazon.com, offered an “Illegal Alien” [...]

This is totaly stupid, why are people so racist what do they even care about illigal immigrants in the country anyway there not doing anything to you there not asking for free food or free clothes they just came for a better opportunity for life that is not provided in there own country.