What is the “Traditional” Age of Marriage?

In the U.S., when people refer to the “traditional family,” they usually mean a family that they associate with the 1950s.  But the 1950s was a really unusual time in American history.  Elsewhere I’ve written about how the husband breadwinner/wife homemaker model is an American anomaly.  The data below, put together by the New York Times, shows that the 1950s was an unusual time in terms of age of marriage also: 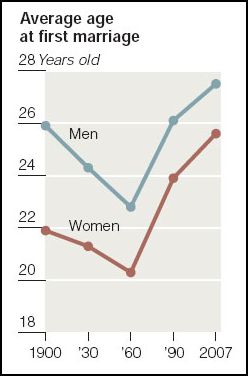 Though the data is rough (five points across 107 years), you can see a distinct dip in the age of marriage that includes the ’50s.

So history isn’t, as we often suppose, a straight line from one point to another.  It’s a complicated story.  And the 1950s… well, to choose that era as “traditional” is no more reasonable than to choose today or the enlightenment or the dark ages or…

Also see: everyone needs a wife and what does “traditional marriage” look like?

Maybe many people associate "traditional family" with the 1950s because of classic TV shows like Leave it to Beaver, the Ozzie and Harriet Show, Father knows Best, etc... and the Golden Age of Hollywood, the era with many movies that glamorized housewives and bread-winner husbands.

I don't know, though. but yeah this is interesting.

They actually mean the traditional family in the Middle Ages, where they belong.

This post is only slightly related to 'The Feminine Mystique', where Betty Friedman discusses how magazine editors, newspaper editors and nearly everyone involved in the media had to perpetuate patriarchy by writing articles that emphasised women's role -- Kinder, Küche, Kirche.

And that women married as soon as they could, often while they were still in college. This happened so frequently that -- if I remember correctly -- entire women's dormitories were set aside for the married women.

[...] between a man and his property? Between a man and more than one woman? Is the idea age for marriage 13, 20 or 27? Is it for love, political maneuvering, survival, babies, or kitchens?  How you answer these [...]