We’ve collected many images of the gendering and sexualization of food, where foods are turned into sexy female bodies or are shown alongside sexy women. Miriam sent us a link to Brick House Tavern & Tap, which markets itself as a Hooters-lite for-the-guys restaurant. The menu includes some sexualized elements, and is based on a clear gendering of items. Clearly it’s objectifying women (check out the website), but what interests me is the message we get about masculinity.

There are salads for men and women; the male version includes two types of meat and boiled egg:

Men are supposed to control things; foods are described as dominant or submissive. I presume the “man-cave” dish would fall into the dominant category: 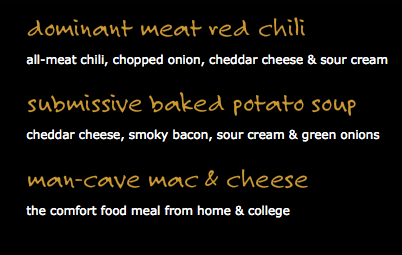 Men’s foods are unhealthy. Steamed, rather than fried, options? Those are for the ladies: 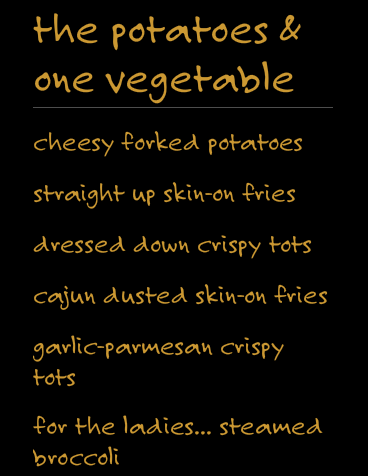 Real manliness is associated with guns:

I thought the “gun show” reference was to biceps – e.g. men have muscles and women don’t. (e.g. Do you have your tickets to the gun show? har har har)

That makes total sense. I’ve had the good luck to never have heard that particular joke until now.

And desserts are “the happy ending,” with “double d” cupcakes and “sweet, innocent” (girl)-next-door apple crumble: 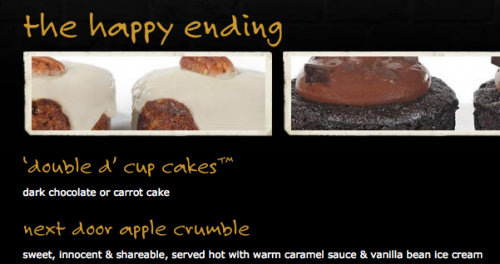 It’s a common theme (see Lisa’s post on frozen dinners): real men need big meals with lots of meat. They don’t worry about health–they want you to deep-fry everything, dammit! Trying to eat a healthy, low-fat diet is for women. And foods are depicted as parts of women’s bodies (“double d”) or associated with sex (“the happy ending”).

I find it ironic that the Man-Cave Mac and Cheese is "the comfort food from home and college," but the version that restaurants serve is traditionally made by women. I doubt the kind of guy that has a "man-cave" knows how to make macaroni and cheese that doesn't involve Kraft or Velveeta. It'd be more appropriate to say, "Like Mommy used to make." The menu tries to harken back to days when manly men ate synthetic cheese from a box, when really it puts you back at Mom's table, when food came plentiful from the woman that changed your diapers. The idea of an infantilized man sitting at a table, eating Mom's dinner, and calling the house a man-cave is...absurd.

Also, the Dressed Down tots sounds...wrong.

The thing I can't help but notice in this "man's food / woman's food" dichotomy is that not only are women supposed to be on a perpetual diet, but women are mocked for that. In the sides menu, there's a variety of flavors and textures for the "male" dishes, while women are offered a single, mind-numbingly boring preparation of a socially disrespected vegetable (see Bush Sr.'s comments about broccoli). There's the strong implication here that women don't have the good sense to order something tasty, or that they are unable to cut loose and have a little fun. (The mocking of that menu item is so strong, I kinda want a look at their walk-in: is there any broccoli in there? If you ordered it, could they serve it?)

Menu's sub-text: Isn't it great to be a man? You can eat anything you want, and while you chow down, you get to watch hot women who place SUCH a priority on being hot in your eyes, that they DON'T get to eat anything theywant! Woot! Celebrate the awesomeness with another order of ranch-soaked tater tots!

Actually, I thought the "gun show" reference was to biceps - e.g. men have muscles and women don't. (e.g. Do you have your tickets to the gun show? har har har)

Wow, what a terrible terrible menu. Especially since that that Bad Boy salad is exactly what I would want to order. Of course I would probably want to leave immediately upon seeing this menu, so the that's probably a moot point.

"Shaved" parmesan for the ladies.

I'm more amazed by pretty much every dish having (mostly bland) cheese. Honestly, why?

God, what a disgusting place.

ANyone else notice that the "woman's" desert was described as "shareable"? There is literally no reason that a desert would be "unsharable", so I guess it's playing into the whole "men have huge appetites and are completely selfish" and "women are dainty and social" stereotypes.

yeah, the girl "next door" being "sweet, innocent, and shareable" is kind of horrifyingly gross.
what's with the little lips-kissing icon next to the burger and sloppy joe?

I don't quite get the marketing on this. I have a hard time imagining that this restaurant's customers would want to have the "Submissive Baked Potato Soup" or the "Good Girl Caesar Salad." On one hand, they make it clear that "real" men are supposed to be horrified by those labels, and then they label their food so that these "real men" would find it unapitizing. Sounds like a really bad business strategy.

I would sort of feel bad for the guys that this kind of thing appeals to, honestly. It's such an extreme form of overcompensation -- I mean, when it gets to the point that certain foods are "male" or masculine and women are only allowed to eat broccoli so as to be non-threatening to the (very, very strong!!) masculinity... wow, that is a lot of insecurity.

I just took a look at the website. There were extra large couches, and big screen tv's for sports shows. The men who identify with this type of marketing are truly sorry, pathetic creatures.

We went to the restaurant. The counches, fireplaces, screens for sports were fine, but the environment was such that I won't go back.

All the girls are dressed in supershort skirts or shorts and belly baring shirts, they open the door for you, take your orders, and sit at your table to chat for a while while you wait for your order (there was a female manager who was wearing average business clothing). The only males in sight were the manager (dressed in shirt and tie) and the others wear jeans and company shirts and buss tables.

The idea of good service is a good one, but it felt very strange to notice that ALL the female severs were sitting at tables, some even eyeing their watches as if they are meant to be there for a set amount of time.

Even the size of your beer is judged, a 16oz. draft is "sissy" and when the man I was with ordered it the waitress said "are you sure? you don't want to be a sissy do you?" Interestingly, he hadn't really understood my problems with the menu/marketing until that point and he felt uncomfortable being pressured to buy more beer (he didn't change his order). I was surprised that the waitress had that response, showing that the menu was perhaps meant to be taken literally.

"Even the size of your beer is judged, a 16oz. draft is “sissy” and when the man I was with ordered it the waitress said “are you sure? you don’t want to be a sissy do you?”"

...because alcoholism is manly?

Who goes to these dumb places??!

J just went to the website and the gender-specific adjectives have been removed. It would be interesting if anyone knows why. Did complaints force a change or did a lawsuit?