The Intersection of Biography and History

Over at Everyday Sociology, Karen Sternheimer discussed one of Malcolm Gladwell’s arguments in his book, Outliers.  She explains:

While the American ethos of success suggests that it is the result of talent and hard work, Gladwell examines factors that sociologists refer to as social structure—things beyond our individual control—to understand what else successful people have helping them on their journey. Let’s be clear: skills and hard work are important, but so is timing.

One of the examples Gladwell uses is the strange concentration of wildly improbable success in birth cohorts (people born around the same time).  Sternheimer summarizes Gladwell’s argument as to how timing and geography shaped the ascendence of Gates and Jobs:

Gladwell describes how being born in the mid 1950s was particularly fortuitous for those interested [and talented] in computer programming development (think Bill Gates and Steve Jobs, both born in 1955). It also helped to be geographically near what were then called supercomputers, the gigantic predecessors to the thing on which you’re reading this post.

Sternheimer goes on to argue that members of Generation X may have a special advantage over earlier and later cohorts.  This figure shows that the number and rate of births peaked between the 1950s and then dropped precipitously during the period in which Generation X was born: 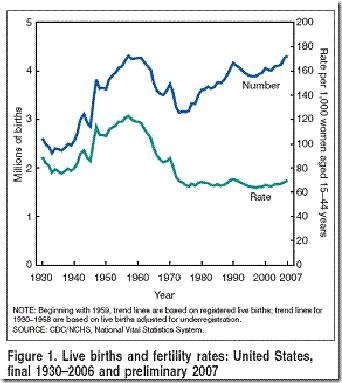 Those of us born in Generation X, then, would have had the advantage of schools designed and staffed for many more kids, leading to small class sizes and more resources for each kid.  Sternheimer writes:

As Gladwell describes, children born after booms… have the benefit of smaller class sizes. An unprecedented number of schools were built for Baby Boomers in the years before I was born. When my cohort was ready to go to school, there were newly-built buildings waiting for us, especially for people like me who lived in well-funded suburbs…

When I was in elementary school in the mid 1970s, there were so few students that many classes were combined: first and second graders had the same teacher, as did third and fourth graders. Looking back, this provided me with some unusual opportunities.

Being able to think through this intersection of biography and history is how C. Wright Mills describes as “the sociological imagination.”

I wouldn't mind digging into this more, because it's intriguing. Buuuuut...I was born in 1973, and my experiences were exactly the opposite. A Rustbelt Refugee, I was crammed into a series of Sunbelt schools visibly bulging under the strain. In the 2nd and 3rd Grades, I was educated in "portable classrooms"--a sort of trailer park encroaching on the athletic fields. In the 4th grade, I went to a previously mothballed rural school building that was pressed back into creaking service to accomodate the demand. My class sizes were generally over 30, and only rarely would there be a student teacher or anything like that to assist.

So that's my anecdote, and a prime example of how the plural of "anecdote" is not "data."

It leads me to what bothers me about this chart. The variables of live births and fertility rates are subtly transformed into proxies for "per capita funding of public education" (staffing levels are, presumably, the important thing here--not so much how many square feet of school building each student gets) without so much as a by-your-leave. I would really think that a better proxy for per-capita funding would be...per-capita funding.

[...] from Apple such a device even exists , it has already generated acres of column inches. The Intersection of Biography and History – thesocietypages.org 10/06/2009 Over at Everyday Sociology , Karen Sternheimer discussed one of [...]

Data is just the sum of anecdotes.

"As Gladwell describes, children born after booms… have the benefit of smaller class sizes."

I can only laugh at that. When you can't fill the classes any more, you close down the school/kindergarten and move the children to the nearest school.

And Bill Gates was born into an upper middle class family and benefited from the privilege that came from his class standing. I think it far outweighs his birth cohort.