Friendly Villagers Get News from Foreign Lands: Tourism in Brazil

Way back in June Missives from Marx sent in a link to a story at Dark Roasted Blend about tourism in the rainforest along the Amazon River near Manaus, Brazil. One stop was at a small riverside village where tourists are taken to have an “encounter of two different cultures.” Here’s a photo from the post: 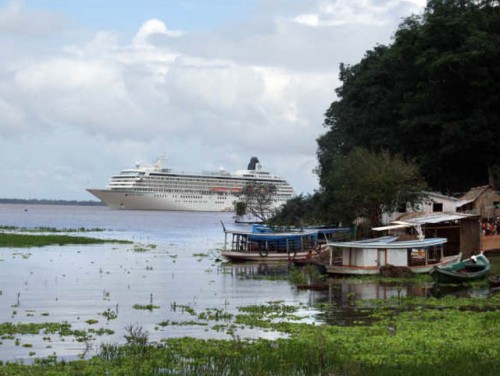 Underneath the photo was the following caption:

A cruise ship arrival is a great event for the small village located on the mouth of Valeria River. The friendly villagers are always happy to welcome all visitors, eager to make contact and get news from foreign lands.

“Friendly villagers” “eager to make contact” and learn about “foreign lands”? It’s an incredibly patronizing description that sounds like it could have been in a travel brochure for the British Empire decades ago.

Because of the small space, the visitors are literally poking into the river people’s lives. But they look happy enough to share with us their ways of life: we are being shown their schools, the local market and even the way their houses are made.

They seem to understand that visits like these sustain the little trade they are able to make by selling souvenirs and exquisite crafts. There are very few inhabitants and they are all very proud of their amazonian heritage. Although modern living is slowly making its way through, they dress up with traditional costumes.

Yes, they do understand that the tourist visits sustain their economy. They let people poke into their lives because they need the money. And they dress up in traditional “costumes” (?) because it makes tourists happy and then the tourists give them more money.

The kids, apparently, haven’t learned the etiquette for dealing with tourists. The post has several images of children with labels like “Little Warrior,” with descriptions such as:

They are not used being on display for the large audience and they all look like they would be happier playing, rather than demonstrating their skills. One particular girl attracted the crowds with her beautiful, magnetic eyes. She was demonstrating archery, but her eyes were throwing the real darts.

The poster acknowledges that the children don’t like being on display, but doesn’t think that might mean that a) you shouldn’t then treat them like tourist attractions or b) maybe the adults don’t really like being on display much either but have learned to play along better. I also wonder whether the children are demonstrating “their skills” or whether a kid holding a bow and arrows is part of the play-acting for tourists.

I once went on a river tour outside of Manaus; the one described here sounds almost identical. I felt uneasy about the idea of visiting the village but there wasn’t really a choice (they forced us off the boat at each stop) and my boyfriend at the time was excited, and so we walked around. It was an incredibly creepy experience. The people there were obviously poor, and tourists were walking around gawking at them, feeling entirely comfortable looking right into their yards and houses. I felt terribly awkward; even my boyfriend felt weird and just wanted to leave. I would not say the people looked thrilled to see us. Some did, especially those selling soda at the cantina (part of that “modern world”). But more than one person, mostly children, glared. And it was very clear that they were being nice to us and offering to be in photos with tourists in hopes of making a little money.

The whole thing felt like cultural tourism–hey, Americans/Europeans! Look at these people in their pre-modern villages and traditional “costumes”! Isn’t this a neat cultural encounter? Feel free to roam around and look at anything you want–the jolly villagers are just thrilled to death to have you here!

In another case of this, James T. sent in this video, found at 3quarksdaily:

It’s distressing to see this type of tourism prestened in such a positive light without at least discussing the ethical issues that might arise when relatively wealthy tourists encounter an impoverished group dependent on tourists’ money for some of their livelihood.

I think you've got a dropped sentence at "And it was very clear that".

And yet Manaus itself is a fairly significant city. Not without its poverty, or contrasting rich areas. But not all the adjacent communities are either poor, or aboriginal. And the river is quite busy with commercial traffic of all kinds.

When I was there (business) I didn't see as much of the surrounding jungle as I would have liked. But we got out onto the river several times, and saw plenty of communities that were no poorer than I've seen on the Mississippi, or in parts of Mexico.

It's as if they sought out some poor abos for the especially rich tourists to see...

Creepy. When I read this bit: "One particular girl attracted the crowds with her beautiful, magnetic eyes" my first thought was "hey, in a few years you could totally come back and have sex with her! 'Cause she's a tourist attraction, not a kid!"

They seem to understand

And that shit is word for word how I'd talk about swimming with dolphins or training a dog or playing with a pet rat. Sure, it's not human so there's no way to know what it *really* thinks but it does come to me when I offer food and US dollars!

I enjoyed this article, but have read many that are similar, as a person who is always having these types of conflicts while I am working/traveling abroad, I've been frustrated by the invasive influence of cultural tourism, ethnic tourism, voluntourism, etc. you ask about whether the discussion of the ethical issues will arise, but what are those issues? who will discuss them? how can we proceed with this conversation, now that we realize there is something "wrong" with this...what do we do? what can i do?

after all this thought I often just find myself going back into the car, or going back onto the boat, away from these places back to our normal lives...

I'm brazilian, but living in São Paulo (the largest city in Brazil and the world's 7th largest metropolitan area. by Wikipedia), and i completely agree with you.

The same thing happens in Rio de Janeiro(2016 Olympic City). Where a company make some agreements($$$) with the drug dealers that own the favelas (slums) to let them get in the favelas with some tourists to take a ride in the slums. So they can see what a really poor and afraid community looks like.

Some people say that they like to go to the favelas because you can't feed the animals in the zoo. But that is just us laughing at our own disgrace.

Sorry for the por english....

How does this relate to "Amish country" or similar things in the U.S., where people pay to see others live, and in turn the people make money?