The Social Construction of Social Problems

One way to study social problems is to take a social constructionist approach.  This approach suggests that the degree to which a social problem is perceived as problematic, as well as the kind of problem it is understood to be, is a function of social interaction.  For example, many Americans consider drunk driving to be a very bad thing and a serious threat.  Drunk driving is not only embarrassing, it is punishable by law, and a conviction could result in social opprobrium.  It wasn’t always that way, and it still isn’t all that stigmatized in some parts of the U.S. and, of course, elsewhere.

So, social problems aren’t immediately obvious, but need to be interpreted and presented to us.  And, of course, some people have more power to deliver a message to the public than others.

Artist Susannah Hertrich developed this graphic (via) designed to bring to consciousness the difference between the likelihood of harm from certain threats and public outrage: 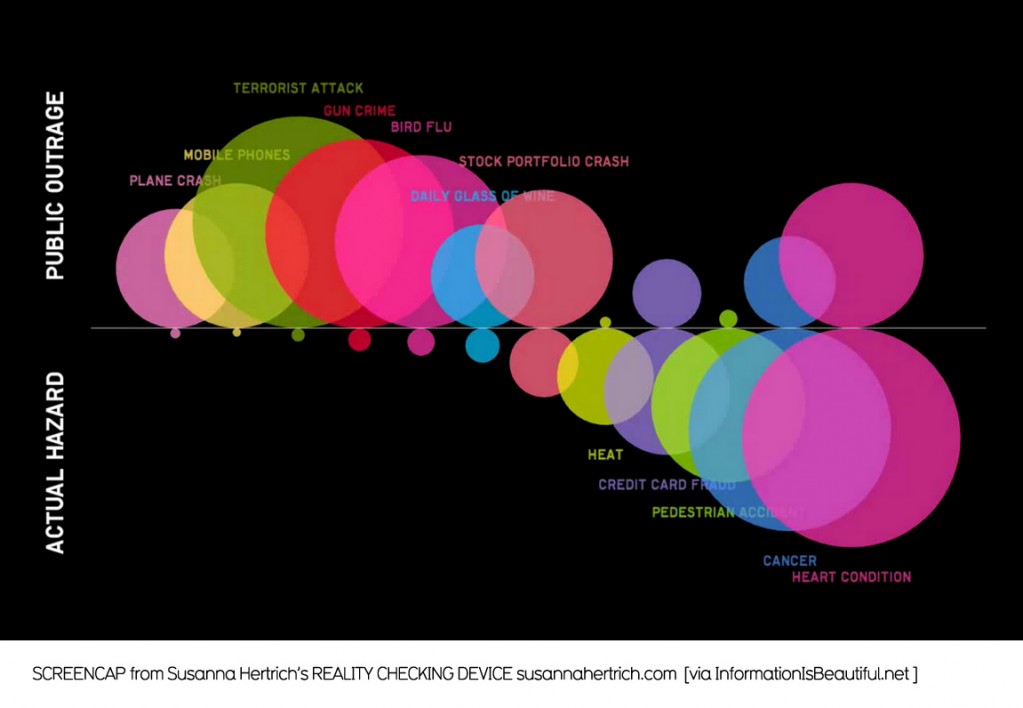 I am unsure as to how she measured both “public outrage” and “actual hazard” but, giving her the benefit of the doubt and assuming that this information is based on some reasonable systematic measurement, the image nicely draws our attention to how some social problems can receive a disproportionate amount of outrage, contributing to their social construction as significant or insignificant social problems (or, alternatively, their social construction as public problems for which outrage is appropriate and useful, versus private problems that have no public policy dimensions).

So, for example, heat is seen as relatively harmless even though, as Eric Klinenberg shows in his book Heat Wave: A Social Autopsy of Disaster in Chicago, it kills many, many people every year and is severely exacerbated by social policies both directly and indirectly related to weather.  But the people who die from heat, and those who love them, tend to be relatively powerless members of our society: usually the elderly poor.

Conversely, the threat of terrorism attracts a great deal of public outrage, but is not a significant threat to our individual well-being.  Still, certain members of our society with an ease of access to the media and authoritative roles in our society (mostly politicians and pundits) can raise our fears of terrorism to disproportionate levels.

Similarly, bird flu makes for a fun story (as all gruesome health scandals can) and gun crime feeds “mainstream” fears of the “underclasses” (often perceived as black and brown men).  Both make for good media stories.  Less so, perhaps, pedestrian accidents.

What is the public outrage over a Daily Glass of Wine? Is it one of those "Chardonnay-sipping Elitist" sort of things?

My guess is that she used news articles and data on actual damage caused by those things. I'm just curious to what she used to determinate the size of each sphere, specially when you compare something like credit card fraud and pedestrian accident, where one results in financial damage while the other in physical and financial damage.

I think the explanation for why things like terrorism, plane crash and bird flu provide for more public outrage it is because they are more newsworthy. They are big events that are a break from the norm, and jornalism will often go after that, different from cancer or pedestrian accident, which is constant and happens all the time. I'm not saying that is the proper way to make news, that's just unfortunately the way news are made.

[...] September 30, 2009 The following is a post from the blog Sociological Images, where it appeared as The Social Construction of Social Problems.  The image was prepared by a graphic design artist for the purpose of conveying the gap [...]

I wonder if there is a correlation between public concern and perceived arbitrariness or immediacy of the threat. e.g. Terrorism is arbitrary, immediate, and unavoidable...heart disease creeps up on you over decades.

Here's another one, not documented above, but which I can share based on years of experience in college health. The actual hazard of college drinking is significantly higher than the public outrage -- if you're talking to students.

But if you ask a college president or a judicial officer or someone (like me) who deals with the legal, financial, health,and other negative consequences of alcohol consumption by students, then it's a huge public outrage and equally huge actual hazard.

Oh, the only time the students will be massively publicly outraged but there is little actual hazard? When a more restrictive alcohol policy is being implemented.

This seems to me to be only a halfway social constructionist approach -- because you're arguing that there's still a "real," objective risk level and that societies merely construct misunderstandings of it. But the social science literature on risks (by people like Paul Slovic, Mary Douglas, Sheila Jasanoff, etc) has thoroughly questioned that idea. A more fully constructionist approach would argue that the risk level is a function of what you value, and you can't assume that some metric like deaths per year is the real risk. That's not to say that societies don't misapply their values or that you can't argue that a society should worry about different risks, but it's not as convenient as pointing to a "real" risk level.

I wish she'd included car accidents in general--this seems to me to be a huge threat that people ignore every day.

I live in Wisconsin, where we routinely get huge amounts of snow during the winter--but people are expected to "tough it out" and drive to work anyway, because we're Wisconsinites, dammit, and we won't be put off by a little snow. But so many more accidents happen in bad weather. Native Wisconsinite driving abilities can only do so much on a slippery road. So it always annoys me that people are expected to risk their lives just to get to work.

[...] SocImages- One way to study social problems is to take a social constructionist approach.  This approach suggests that the degree to which a social problem is perceived as problematic, as well as the kind of problem it is understood to be, is a function of social interaction… Artist Susannah Hertrich developed this graphic (via) designed to bring to consciousness the difference between the likelihood of harm from certain threats and public outrage: [...]

i think women are  like sex to much than guys so,i do not think!!!

Diary of a Mad Black Scholar: Why It Is Okay to Shoot the Messenger « Welcome to the Doctor's Office — June 19, 2012

[…] sociology, we call this the social construction of social problems: The fact that our fears don’t perfectly correlate with the hazards we face. In this case, media is implicated. What is it making us fear […]

Social problems always related to each other. These are like the web of a sticky spider.

For This Assignment, You Are Going To Direct Attention To The Rhetorical Or Persuasive Aspects Of Claims-making. That Is, In Order To Make A Claim About A Certain Event That Could Be Interpreted As A Problem Worthy Of Attention, The Speaker Or Speakers Mu — September 10, 2021