Elizabeth U. sent in a link to an interactive database that shows requests to have books removed from public and school libraries between 2007 and 2009. Here’s a screenshot showing all requests; at the website you can hover over each point and see what the book was, the basis of the challenge, and in many cases the result: 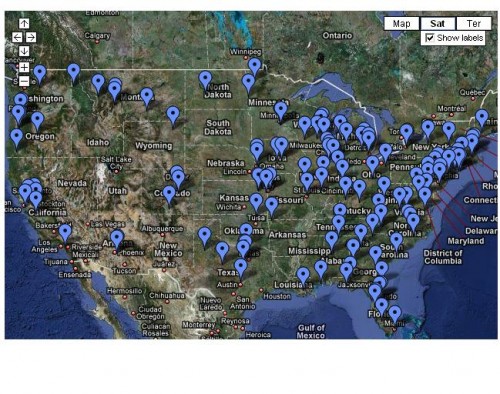 I looked through quite a few of them. The most common reasons for challenges that I noticed are language and claims that the books are “pornographic.” Several cases seem to target books about sexual health. And Rudolfo Anaya’s book Bless Me, Ultima was challenged in at least two places for being “anti-Catholic.” I remember reading it as a teen and don’t remember that at all, but then, I had only the vaguest notion of Catholicism at the time, so I probably wouldn’t have noticed.

Tuscola, Texas (2007) Cormac McCarthy’s Child of God was removed from the Jim Ned High School’s library’s order list after complaints from the parents of a student who also filed complaints against a teacher with the local sheriff, claiming that the book’s content was ‘harmful to minors’ under state law. The parents objected to violence, sexual themes and profanity in the book. After meeting with the teacher, the parents were unsatisfied and registered an official complaint with the sheriff’s office, leading to the teacher being placed on paid, administrative leave. NCAC, ABFFE and the NCTE sent a letter to the superintendent and school board opposing the ban and the community’s actions.

Filing a formal criminal complaint with the sheriff, leading to a teacher being put on administrative leave? I find that terrifying.

And sorry for my absence the last few days! I’m moving and the internet got cut off at my old place earlier than I asked, so I had no internet all weekend. Also, I leased a horse! My life is now complete, but it is interfering with all other activities since I spend every possible moment exploring the nearby desert on him.

I'm a bit shocked that something was removed from my small-town library, but perhaps I shouldn't be. At least it's available on request instead of just gone.

as terrible as book removal is, I'm sure the image would be solid red if you color coded user requests to ADD books to libraries...so I think the system is more in danger from underfunding than from users interfering..my 2 cents..

@Marc: The map only records official challenges that are brought to the attention of the American Library Association and the Kid's Right to Read program. As a result this almost certainly undercounts the number of challenges. It also offers no indication as to self censorship on the part of library purchasers.

Lack of library funding is a major issue, but intellectual freedom is too.

The funniest part is that most of these libraries likely have uncensored public internet access.

*Hell with anybody who bans books.* I wonder, though, if the teacher discussed above *assigned* Child of God to be read by a student. Certainly not, right? That book is not something I would assign someone under 18 to read. If they found it on their own and read it, that's another matter.

I'm really torn on this... I do not in any way shape or form think books should be banned from public libraries. We're adults who have the capability of discerning what we personally find offensive, and I've never met a librarian who held me down and forced something I didn't want to read on me. However... school libraries in my opinion are a different story. I don't think anything should be in the library that wouldn't be taught in class. School libraries are more of a tool- and extension of the classroom. It's been a few (*cough*) years since I've been in high school, but I don't think lesson plans are so liberal now that they include necrophilia. The thing that bothers me the most isn't the whole "the man is keeping free speech down!" aspect, but that "the man" has the ability to back criminal charges on a teacher over it instead of working it out like civilized beings.

Literary value is a matter of taste.

What possible harm could a few written words cause any more? If by around the age of 13 or so a kid has seen an uncensored example of every conceivable type of sexual act (and some that are still inconceivable even after having seen them) and has watched countless instances of graphic and often real violence then I'd say a book that merely describes such things is hardly an issue.

Most parents with a child who is 12 or older are delusional if they think their child hasn't already seen it all. The kids will deny it (so will the parents) just like they're supposed to so everyone can continue walking around pulling the wool over their own eyes about how fanatically degenerate the world has become.

Maybe a better approach would be to teach kids how to think critically about what they encounter rather than running ahead of them trying to throw black sheets over anything wicked, like nipples (Ashcroft took the lead on that one) or two men or two women holding hands, or criticisms of the Catholic Church?!? (huh? seriously? Since when is being "Anti-Catholic" a bad thing?).

Banning books usually just serves to increase their popularity. It is sad though that they will be out of reach from those who might have needed them most.
On the other hand, there are two instances where I have supported a little censorship. The first is in St. Catharines where one of the families of Bernardo's victims lives, the local bookstores were not allowed to put a book written on the subject and published before the videos appeared in their front windows.
The second is just a case in which a book was inappropriately shelved with children's books and was moved to the adult section. In both cases the books were still available, but were moved in an attempt to be sensitive to patrons.

Going to the sheriff and teacher suspension? Sounds like something Orwell would have written. But there is a lot of censorship that goes on at the purchasing level. Just try and find a library video/dvd about natural birth in Southern Ontario!

Oh, and I guess from the graphic we can conclude that all the offensive books have already been purged from Utah, Arkansas, and South Dakota libraries. And it's apparently a non-issue in Nevada, as I would expect.

When I was in high school about a decade ago, a friend's father leafed through his copy of "I Know Why The Caged Bird Sings" and became so enraged at the depictions of sexuality (or was it sexual abuse? I must admit I never actually read the book) that he demannded the school no longer teach the book.

And based on this *one* person's complaint, it was expunged from the curriculum. Now that's small-town Iowa for you...

I've never readi it myself, but Bless Me Ultima was on the REQUIRED reading list for reshmen when my younger brothers went to Catholic high school

@duran - in order to receive federal funding for internet access (i'm sorry that i can't recall the exact name of the program) public libraries must filter their internet access. generally, an adult can get an employee of the library to override the restrictions if they can show that they are over 17 or 18, but that is not the case in all public libraries.

Pretty soon most kids will have wireless devices and then what little censorship we have will vanish. Isn't book banning just in the class of behaviors that will die out over a long enough time frame?

I loved this one, though, from Maine: "(2008) Robie Harris' It's Perfectly Normal: A Book about Changing Bodies, Growing Up, Sex, and Sexual Health was removed by a patron because of her objections to the book's sexual content. Other patrons donated 4 copies of the book, which remain in circulation today."