And Then the Lord Sent Two Research Angels, Versed in Statistics and GIS 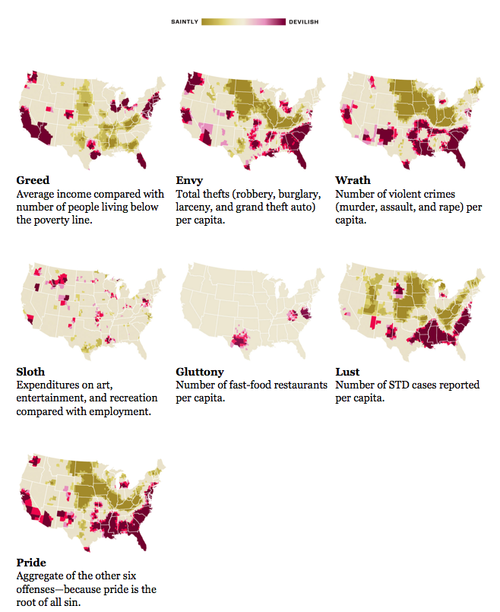 In the Bible (book of Genesis), God sends two angels to the cities of Sodom and Gomorrah. These angels were charged with the task of evaluating the rate of sin within the walls. If the people were completely overridden by sin, God would destroy them.

What if those angels were statisticians, with access to GIS and geomapping software? How would the story have been different?

Some geographers at Kansas State University recently did an analysis of the spacial distribution of EVIL in the United States. Which part of the country is most afflicted by sloth? Lust? Greed? Envy? Wrath? Gluttony? Pride?

That’s right, folks – these geographers have operationalized sin, quantified it, then measured and mapped it. Pride is the aggregate distribution of all other sins, since it is supposedly the root of all evil (though one could also make a good case for apathy). Here’s how the sins are measured (and here’s a good view of the maps):

By looking at sin at the aggregate level, what they’re doing here is examining sin as a social fact, as opposed to an individual trait. This would be a good extension of a lesson on Durkheim and suicide as a social fact. This study really shows why we really can’t truly measure concepts such as this across space and time, since the meaning of these individual acts will vary. Are the same acts categorized and labeled as rape in Montana as they are in New York? How violent does a person need to be before they are arrested for assault, and does that differ by region? Are we really measuring rates of STDs, or rates at which people get treatment for them? If my measure of gluttony is different than yours, can I apply my measure to your actions and call you gluttonous? Or should I be using your measures to evaluate your actions? Is this aggregate data showing different rates of sin, or is it just an effect of different meanings attached to the concepts?

This would also be useful in showing how we can’t extrapolate individual characteristics from aggregate data. For example, I live in Indiana (but teach in Kentucky). This region is low in envy, lust, wrath, and pride; average in gluttony, sloth, and greed; and not particularly high in any of the sins. Apparently I live in one of the more virtuous parts of the country.

I guess I can cancel that fire and brimstone insurance.

But does this aggregate data also indicate that I, Anomie, have greater odds of being virtuous? NO. The fact that I am virtuous in every way is merely a coincidence. You see, their data is not measuring individual sinful behavior. Rather, it’s measuring social facts, and structural conditions, that they hypothesize to be correlated with individual sinful behavior (but I take issue with some of the measures). For example:

Now, excuse me while I get back to my slothful appreciation of art.

Angie Andriot, also known as Wicked Anomie, maintains the (mostly) sociology blog Wicked Anomie: Sociology Run Amok. On occasion, she likes to toss off her cape, hop offline, and play the role of Angie Andriot: Grad Student Extraordinaire – deftly juggling the writing of her dazzling dissertation at Purdue University with the imparting of wisdom to her lovely students at University of Louisville. She is particularly fond of symbolic interactionism. And cheese.

It would be interesting to project onto some of those maps, some of the maps we've already seen on this blog that showed religious participation and affiliation. Methodists and Lutherans seem to be doing fine ;)

I'm a geographer by trade, so I guess I should add to this a bit.

First, the Kansas State study was a joke (in a good way). It's the equivalent of a talk at MLA or the ASA that has at least 5 words in scare quotes.

It was presented at the 2009 Association of American Geographers annual meeting in Las Vegas. It looked at sin because we were, you know, in Sin City. For whatever reason, this study was picked up by the media, which presented it as one of those quirky studies. I'm not sure they'll submit it to a journal, I doubt it'll get accepted.

But I think you made a mistake in your analysis of what the map means. It doesn't try to apply the findings to individuals, but rather regions. Geographers in general, and GIS people in particular, are very aware of the ecological facility and the micro-macro divide. Living in an area with a high crime-rate doesn't make you more likely to be a criminal, it just means that there's more crime in the area. Just like in an area near to fast food restaurants won't necessarily make you a glutton, but according to more rigiour geographic analysis, it does contribute to higher rates of obesity (especially when controlling for the location of supermarkets).

This is one of the dangers of using geographic analysis without understanding the theoretical background of geographic thought. So, in conclusion, the world needs more geographers!

-->"But I think you made a mistake in your analysis of what the map means."

Nah, it just means I wasn't clear enough. My point was not to criticize the study by judging it according to standards more suitable for micro-level analyses. Rather, it was to show that this study is a good teaching tool for those of use who teach Introductory Sociology, and need good examples for trying to explain to our students the difference between micro and macro.

The fact that this study was done tongue-in-cheek is part of the allure of using it as a teaching tool. I think that makes it more interesting for the students.

"At least they didn’t use obesity rates as their measure."

Thank God. Though it's seriously depressing that it's remarkable to find a study on consumption habits that's *not* blatantly fatphobic.

I wish the chart was a little bigger; I can't tell if the Twin Cities are represented in the Sloth category, and considering that they've got the highest number of theater seats per capita in the country (outside NYC), I would have expected to see them with something of a red spot. The ones that could either be on the western edge of Wisconsin or the eastern edge of Minnesota don't seem like they're quite north enough to be Minneapolis-St. Paul.

How exactly do you propose a better way to map sin would be?

It would be interesting to see a map of the virtues overlaid over the map of sins. I won't speculate ...

[...] Together at last: Geographic Information Systems and the Seven Deadly Sins. “Cancel that fire and brimstone [...]

Look on the bright side, Brew. ,

Would it not be interesting to see how sin has increased and decreased over the past 40 or so years? To see how society has evolved in the sin areas... hummm food for thought