The Ubiquity of McDonald’s

Behold “a visualization of the contiguous United States, colored by distance to the nearest [of the about 13,000] domestic McDonald’s” developed by Stephen Von Worley at Weather Sealed: 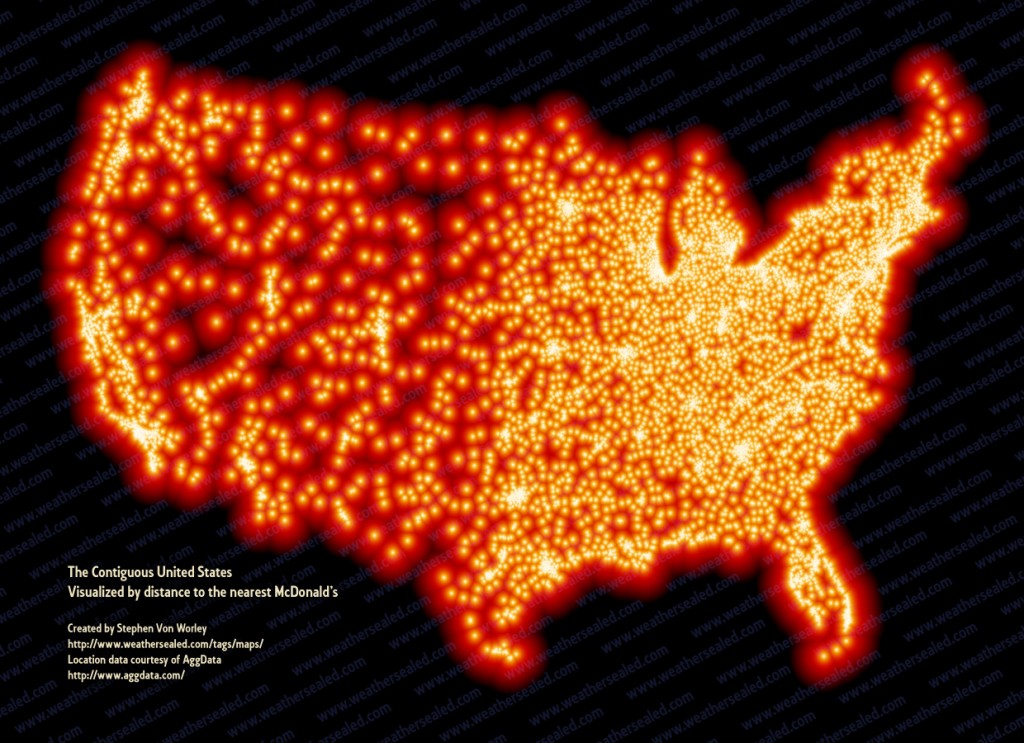 As expected, McDonald’s cluster at the population centers and hug the highway grid.  East of the Mississippi, there’s wall-to-wall coverage, except for a handful of meager gaps centered on the Adirondacks, inland Maine, the Everglades, and outlying West Virginia.

For maximum McSparseness, we look westward, towards the deepest, darkest holes in our map: the barren deserts of central Nevada, the arid hills of southeastern Oregon, the rugged wilderness of Idaho’s Salmon River Mountains, and the conspicuous well of blackness on the high plains of northwestern South Dakota.  There, in a patch of rolling grassland, loosely hemmed in by Bismarck, Dickinson, Pierre, and the greater Rapid City-Spearfish-Sturgis metropolitan area, we find our answer.

Between the tiny Dakotan hamlets of Meadow and Glad Valley lies the McFarthest Spot: 107 miles distant from the nearest McDonald’s, as the crow flies, and 145 miles by car!

Suffer a Big Mac Attack out there, and you’re hurtin’ for certain!

Another rural gap east of the Mississippi--the upper peninsula of Michigan.

Should overlay with population density.

Now you know why I love South Dakota so much!

Hey, you know what would be interesting? A post on how frequently Alaska and Hawaii are left off of U.S. maps. When they are included, they are frequently re-sized to fit in the corners, while the lower 48 states are always to scale. It's actually quite alienating to those of us up here in Alaska, because it seems like we don't matter. The presidential election is also usually closed before our votes are even in, let alone counted. This kind of thing results in a very real sense of independence and estrangement among Alaskans; it's almost like we live in a separate country. I think that you could have a very interesting post about that kind of regional alienation within countries.

I wonder what the Subway map looks like, as there are quite a bit more of those than McDonalds in the country.

Makenzie: I took a vacation in Alaska this summer, and visiting the capitol building in Juneau it was extremely interesting to read the many posters about its struggles to become a state. The things you're saying are reminiscent of things that have resonated in the area for a very long time. I agree that it's a very interesting topic!

I wanna see one with Radio Shacks on it.

Yes, it is like a plague. Even here in Europe the old city streets are polluted with these yank trash food joints. It is a travesty. Thanks USA!

The Unevenness of McDonald’s Dominance…See The Places McDonald’s Reigns Supreme « Welcome to the Doctor's Office — May 4, 2012

[...] ago, Lisa posted about the ubiquity of McDonald’s in the U.S., highlighting a map that showed the distance from the nearest McDonald’s. As a follow-up to that, Data Pointed posted a map that illustrates the unevenness of its market [...]

I love McDonalds food a lot. They maintain uniqueness in every time. Now you can also get some free coupons to your next visit to Mcdonalds from Mcdvoice survey. Take survey from www.mcdvoice.com