Regulating Black Women’s Hair, and a 1969 Movie about Gay Men

Larry Harnisch, of the Daily Mirror, who spends a lot of time at his job going through the L.A. Times‘ archives, found this story from 1969:

Of course, most airlines had strict requirements for flight attendants’ physical appearance, including weight limits and guidelines for hair and makeup. But Renwick argued that her hair was much shorter than many White flight attendants’ hair. Many in the African American community felt she was being punished not for the length of her hair, but for wearing it in a natural style instead of straightening it.  United eventually paid her $5,000, “endors[ed] the Afro hairstyle,” and offered her her job back, and offer she did not accept.

In a completely unrelated post, I found this advertisement for the movie Staircase on Larry’s blog: 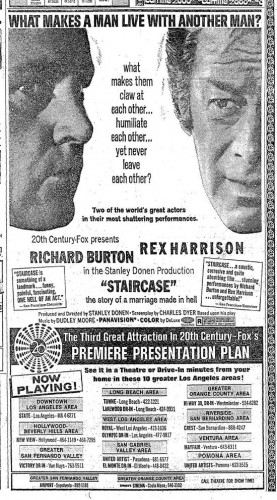 Under the title “Staircase” it says “the story of a marriage made in hell.” Larry says, “Rex Harrison and Richard Burton play two hairdressers who live together…”

Larry’s post also includes a review from September 26, 1969, that contains the following memorable phrases (the image is too small to read if I post it here, so click over to Larry’s post to see it):

They are bitchiness itself…

…what, with the deepest of ironies, is called the gay world.

That’s something else, eh?

Although it seems like the second ad is sensationalizing a dark view of the gay lifestyle, the main characters in the film really do treat each other in horrible ways for most of it. Yet there is tenderness and poignancy, mostly brought on by their instinctive decisions to stick together in times of crisis. (e.g. Rex Harrison's character sticks around when Richard Burton's character loses all his hair and self-confidence to alopecia, even if he does mock him constantly; Burton's character also accompanies Harrison's to court for moral support when he is accused of promoting an indecent and illegal lifestyle by performing in a drag show.) It is important to note that this film came out shortly after the legal prohibition on (specifically male) homosexuality in Britain was lifted (in 1967) and that this film is set during that prohibitive time. With many individuals and couples deeply closeted out of necessity and unable to speak out against negative stereotypes, it's interesting to see what kinds of images and characters prevail in representations made during legal and social shifts like these.

I haven't seen the movie but these descriptions of it remind me a lot of Who's Afraid of Virigina Wolf?

As for the hair? Just makes me so sad that attitudes to the Afro style haven't really changed all that much.

That's not a typo - 'quean' was actually a correct spelling of that word (although it is now archaic). A queen was royalty, but a quean was a bad woman. Some time before World War I, quean came to refer to male inverts (invert is a now obsolete category that originally included most of the people who we today would call homosexual or transgender). The spelling shifted to queen later.

Of course, in this postmodern world, most of my gay friends will probably laugh wildly and start calling each other "querulous old queans" once I show them this entry. Hell, it would be a pretty good name for a bowling team. Guess I'd better put this one on the Netflix queue.

I tried posting a comment and I don't see it. Is it being censored or is there another problem?

"With many individuals and couples deeply closeted out of necessity and unable to speak out against negative stereotypes,"

It is, nevertheless, interesting to compare this portrayal with the current media manufacturing plant of nice stereotypes of homosexuals. It is also interesting to note that current nice-only stereotypes are not deemed to be a stereotype by many. It is only when there is a negative portrayal that, all of a sudden, we are supposed to be dealing with a "stereotype."

I'm not saying there aren't any, but from a sampling of films and programs from someone who does some TV and movie watching, this is what I can observe concerning the characters and storylines themselves.

I would say that, by and large, it is not the degree of stereotyping that has changed concerning homosexuals, it continues to be as intense as ever, but it's the type of stereotype that has currently shifted practically 180 degrees. Characters that reveal that among people with a homosexual mindset, we will find monstrous, or violent, or repugnant, or disgusting people, are considered to be "stereotyping" homosexuals in a negative way, and characters that show homosexuals to be only nice are considered to be portraying the "full" or "correct" reality about homosexuals.

As an aside, I have just looked up the etymology of the expression "by and large," and what a nice one it is--it's related to sailing. (name link)

"To get a sense of the original meaning of the phrase we need to understand the nautical terms 'by' and 'large'. 'Large' is easier, so we'll start there. When the wind is blowing from some compass point behind a ship's direction of travel then it is said to be 'large'. When the wind is in that favourable large direction the largest square sails may be set and the ship is able to travel in whatever downwind direction the captain sees fit."

As a parallel to how politics shapes culture (as in media products), liberal politics regarding concepts and views on homosexuality are currently blowing the huge square (and mindless) sails of media producers and audience preferences in the direction they see fit.

"'By' is a rather more difficult concept for landlubbers like me. In simplified terms it means 'in the general direction of'. Sailors would say to be 'by the wind' is to face into the wind or within six compass points of it. To sail 'by and large' required the ability to sail not only as earlier square-rigged ships could do, i.e. downwind, but also against the wind. At first sight, and for many non-sailors I'm sure second and third sight too, it seems impossible that a sailing ship could progress against the wind. They can though. The physics behind this is better left to others. Suffice it to say that it involves the use of triangular sails which act like aeroplane wings and provide a force which drags the ship sideways against the wind. "

And, as an added language coincidence bonus in this wonderful little sailing expression (two for the price of one, we could say), "by" provides a second nice parallel to how ideology blows people's perception and moves them forward, directly towards a certain pre-selected direction, against the logic of moving counter-wind, that is, against all force of reason or the ensemble of their intellectual cognitive skills.

"By and large" is definitely the expression to be used here.

Well, it appears this time, after a few tries... weird.