Who Produces Fuel-Efficient Models of Cars?

Nate Silver at FiveThirtyEight discusses the “Cash for Clunkers” program. There has been a fair amount of criticism of the fact that the program, which is supposed to stimulate the economy partly by providing a boost to the auto industry, has been used by consumers to buy a large number of non-U.S.-made cars (which, of course, is a slippy definition–there are Toyota and Honda plants in the U.S. and Ford plants in Mexico, but by “U.S.-made,” people generally refer to Ford, GM, and I guess Chrysler).

But the other point of the Cash for Clunkers program was to increase the gas mileage of the U.S. auto fleet overall.  The new car you can apply the federal aid to has to get at least 22 mpg. And because of choices the U.S. auto companies have made in the past about what kinds of cars and trucks to emphasize, a smaller proportion of the models Ford, GM, and Chrysler offer qualify for the program: 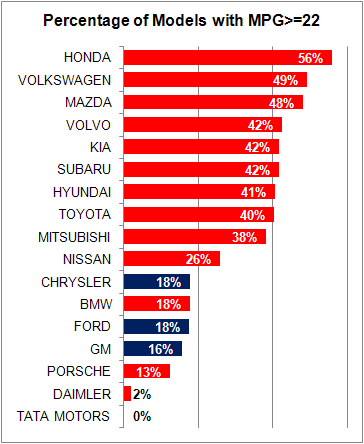 Of course, this graph doesn’t tell us how popular each of the models are–if GM only had one model that got more than 22 mpg, but that one model was incredibly popular, the company might have an average fleet fuel efficiency that was relatively good. And if Chrysler had a lot more models available than Honda, it might have more 22+ mpg models total even though they’re a lower percentage of all Chrysler cars.

Still, I found the graph shocking; 22 mpg seems like such a low benchmark, I never would have guess than less than 1 in 5 U.S. models manages to meet it. Hopefully the Cash for Clunkers will have a longer-term effect of encouraging the U.S. automakers to emphasize fuel efficiency to a much greater degree than they’ve been doing (and U.S. consumers to buy their fuel efficient models).

I was bothered by the cash for clunkers program because ultimately it is bad for the environment. The best thing for the environment is to drive used cars until they absolutely can't be driven any longer. This is mostly because it takes a huge amount of energy to build and ship cars all over the country. But this really wasn't about the environment at all. It was about stimulating the economy. And I find it interesting that so many people have no problem with the government subsidizing our car shopping but not our health care, or public transportation.

I just can't get over setting the bottom limit at 22 mpg. I mean, really, that's abysmally low. To subsidize a car that gets 22 or 23 mpg? Really?

I agree that the graph is striking, but there's a problem with it that goes beyond the ones you mention in the paragraph below it. My wife pointed out that, if what you're counting is simply number of models as opposed to number of cars, the American car makers do have a lot of truck models designed for heavy-duty hauling. They're not trucks that compete with the Honda Civic; they're not designed for MPG because they're not intended for distance traveling, and you wouldn't be trading in your 1997 Camry to get one of them.

In other words, the flipside to "GM has one model that's incredibly popular and gets more than 22 mpg" is "GM has many models that aren't incredibly popular and get less than 22 mpg". It's still a fact about what American car makers focus on, but it's somewhat less damning in this light, and I'd love to see the "number of cars" rather than "number of models" figures.

Amazing. I have a 10 year old Mazda that's turning into a jalopy and that -I- think has absolutely pathetic gas mileage at 22 mpg. Unfortunately for me, obviously she didn't quality for Cash for Clunkers, so I'm continuing to string her along until I can afford to upsize the MPG and hopefully downsize the emissions. (Would love to go car-free altogether, but it's not a realistic option in my neck of the woods.)

Btw, interesting to see Volkswagens doing so well in -this- particular slice of data. I love them dearly, but only their diesels gets good mileage by my terms.

Oops, also, I remember for a while there the big SUVs had big tax benefits tied to them if you could in any way justify them as a business expense. I know plenty of folks who jumped on that opportunity who had no practical need for a model that large.

Volvo has been owned and constructed domestically by Ford since the mid 90's.

The graph is SO wrong!! I want to see the source and the method. I am a social researcher and a former/current auto industry buff. There is SO much that the graph hides and distorts.

The simples fact being that the Japanese have repeatedly tried and failed to create competition in the large SUV/Truck market. This is still a market that is needed by the commercial consumers (even if abused by suburb-dweling commuters) ... and it makes no sense to celebrate the imports for this failure - they all WISH they got more traction there, as it is a well of profits. If you look model by model, you see just how well the domestics are doing - and doing better by the year as more and more people realize this reality and buy their cars.

Again - I need to know how the graph was calculated, but I have a few guesses and all of them are severely imprecise and incorrect.

Ah EPA ... their problem is the listing of differed version of the same model as different models. For example, the Chevy Silverado is listed as 26(!) different models, and its GMC sister, the Sierra adds another 28 (!) models. In reality we are talking about 2 - 4 models (F150 is only 4 models listed, though)

Unfortunately these comparisons are rarely done.

I would like to make a final point. Since your premise stems from Cash4Clunkers, here is a final analysis on that topic that touches exactly on the issues I debated above: (now, MacElroy proposes some conspirational theories, which I do not support, but he makes his point)

Who Produces Fuel-Efficient Models of Cars? « Christopher A. Haase — September 2, 2009

Now very often there are problems with the ignition system, I already know this, because many motorists have already told me more than once that they have a problem, then something knocks there, then something else like that. Therefore, I already know what and how to do here with this situation, I recommend everyone to be sure to read a very cool and interesting article about ignition systems https://avtotachki.com/en/kakie-byvayut-sistemy-zazhiganiya-avtomobilya . You can just read here and determine what and how exactly it can be, how to fix it and what kind of ignition systems there are, to distinguish them is extremely important for making a diagnosis. I can tell from myself that it is better to take a closer look here and study the details, I think it will be useful for every motorist. I hope that I can really help someone else besides me. They already helped me and I now know what and how to do. Good luck and success with this tricky business.