Teresa C. sent in this image created using UNICEF data to show what percent of women surveyed in various countries said it was acceptable for their husbands to hit them: 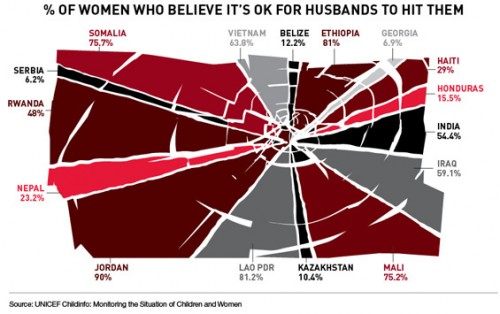 You can find the data and a breakdown of UNICEF data collection methods here. The data for many more countries are available there too. I can’t quite figure out why these particular countries were used in the image; they aren’t all of the countries with the highest percentages. As far as I can tell, the UNICEF data table only includes numbers for the “developing” nations and some countries from eastern Europe, which is UNICEF’s focus. But I do wonder what the numbers would be if you asked women in the U.S. a question along the lines of “is it ever acceptable for a man to hit a woman?” or “can you think of any situation where it might be understandable that a man would hit his wife or girlfriend?” You might get higher “support” for violence against women than you’d think. The UNICEF page doesn’t provide the wording of this question, which would be interesting to know.

That’s not to downplay the issue of women justifying or accepting violence against women, just that those of us in the “developed” nations need to be sure not to pat ourselves on the back too much about how enlightened we are about domestic violence.

And I can’t help but dislike the image, in that at first glance it would appear to be a pie chart in which all of the sections add up to 100%; really a bar graph would be a better way to illustrate this. But then, I had a dissertation advisor with a 5-page single-spaced document outlining his standards for data presentation.

UPDATE: Reader P. makes the point I was getting at above (that the wording might greatly impact how much “support” you find for violence against women) much better than I did:

What they were actually asked, in the MICS and the DHS (the two primary sources for the data), was this question:

“Sometimes a husband is annoyed or angered by things that his wife does.  In your opinion, is a husband justified in hitting or beating his wife in the following situations:

I bet you get very different rates for different “justifications,” which is important both for data-gathering/presentation and for anti-domestic violence campaigns. And, again, I bet if you broke down various “reasons” for hitting a woman, I bet you’d get higher-than-expected acceptance of them in countries in the “developed” countries that weren’t presented in the table.

I don't mean to sound flippant, but I really am in agreement about the graphic itself - the pseudo-pie-chart format just obscures the information, if anything. I also agree that the phrasing of the question is at least of mild interest to any sociological discussion about the figures, but mostly I feel shocked and saddened, and don't know what else to add.

This post is WORTHLESS without the wording of the question. Come on, you know that. So why even post it?

"% of women who believe it's ok for husbands to hit them;"

while the table reads,

"% of girls and women aged 15–49 who responded that a husband or partner is justified in hitting or beating his wife under certain circumstances" (em. added).

Now, "certain" as used in this sense has a double meaning. It could refer to a specific named circumstance (or set thereof), or it could refer to any unstated circumstance. As the heading is written, it implies that respondents were asked "Is a husband or partner justified in hitting or beating his wife under certain circumstances?" What they were actually asked, in the MICS and the DHS (the two primary sources for the data), was this question:

Sometimes a husband is annoyed or angered by things that his wife does. In your opinion, is a husband justified in hitting or beating his wife in the following situations:

If the data were to be presented in the most accurate way possible but without maxing out the pedant-o-meter, I think the heading should read something like,

"Percent of women who feel a husband is justified in hitting or beating his wife in at least one of five named situations."

That graphic is terribly sensationalistic. :/ the numbers are disturbing enough without making it look like broken glass, especially when a different graph would have served the purpose better.

It's also not at all clear how the numbers are manifested in the graph. Compare Rwanda, Somalia, Jordan, and Ethiopia, for instance.

I think it is rather patronizing to not include industrialized nations, as if we're above such ideas.

I wonder what the results would be in the reverse scenario;

“Sometimes a wife is annoyed or angered by things that her husband does. In your opinion, is a wife justified in hitting or beating her husband in the following situations:

I suspect you'd see much greater 'support' from the west. I have a feeling it's more the phrasing of the question than anything though.

The wording of the survey question is admirably clear, much better than your suggested “is it ever acceptable for a man to hit a woman?” which you seem not to realize could include self-defense.

Why should we be any less appalled that in the vast majority of cultures, it's considered acceptable under a wide range of circumstances for a man to hit another man?

Since there are at least a couple of sociologists here, I'd like to ask your thoughts on this - have you seen any convincing studies about the relationship between a culture's attitude to ALL violence and its frequency of violence against women?

Also, I agree - that graphic is one of the worst presentations of data I've seen outside of TV news. Considering how arbitrary the selection of countries is, I don't think any comparative graph would have said anything useful.

“Sometimes a husband is annoyed or angered by things that his wife does. In your opinion, is a husband justified in hitting or beating his wife in the following situations:

These may not be the main reasons for woman beating. A lot of researchers fail to realize men beat their partners is because their partners are cheating on them, lying, etc.-this is the root cause of domestic violence. It happens a lot when women do these things.