In a list of 15 contrasting billboards on Buzzfeed, I found these three: 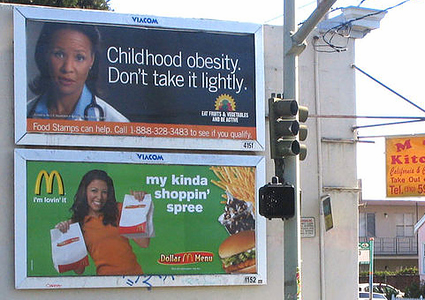 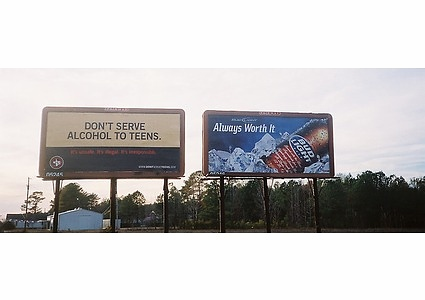 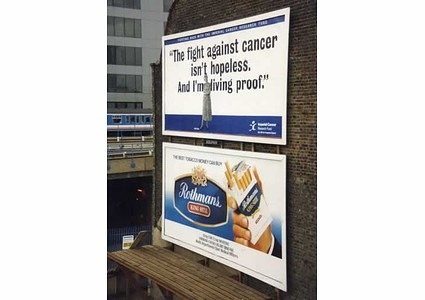 I usually think of public service announcements as a form of education.  Presumably there’s a harmful ignorance out there somewhere that can be corrected.  But these contrasts bring into stark relief the fact that public service announcements aren’t only fighting ignorance, they’re fighting corporations.  The battle isn’t just between misinformation and information, it’s between for-profit and non-profit organizations.

I've taken photos of a fair share of this kind of thing myself, usually on a friend's cell phone camera.

great slide show. My favorite one was the one with Jesus and a cat.

I have to wonder if the placement is at least sometimes intentional--if the health program looks for space next to fast food/alcohol/cigarette (that must be old) billboards for their messages. It can't work the other way around, right?

I think the top one shows is most interesting, as it's basically the same woman in both adverts. In one of them she looks concerned, in the other one exstatically happy. Now if people have to choose between those two mindsets, guess which one it's going to be?

Here's something even more insidious!!!
a great example of the blurring between Television News Coverage and an Infomercial for milk.

Like the ties between the National Dairy Council and School Lunch Program, here we see ABC creating an infomerical within their news coverage of an event promoting milk. There is no question of whether milk is a necessary or nature's wholesome food--it just is (except if you happen not to be white, woops!).

When it comes to milk, people just trust that it is good. It has such a "wholesome" image that even when the NDC, an industry organization, is putting on a "tour" to estoute the nutritional benefits, people think of it as some kind of charitable act rather than a marketing tool. I doubt many viewers would even notice the very obvious infomercial character of this news piece.

@renee- i've actually worked with more than a few marketing folks who have used that method, to a very successful degree. i actually think the ones that ame a statement, aren't just kinda silly, are quite poingnant. if they were done on purpose, bravo to the health/alcohol/and even religious (even if i don't concur) organizations for thinking of it.

btw- although striking, i think the last one might be photoshopped. something with the edges and lighting is striking me as unnatural.

I'm just startled that cigarette advertising is still legal in America (unless it's a very old ad).

I'd like to point out, however, that just because an organization is not-for-profit doesn't mean that there still can't be staggering amounts of money involved ... and people who are more concerned about the money than the supposed message. The fight against obesity is one area where I happen to be more aware of this, but I suspect that other public messages are similar.

"Basically the same woman," esther, as in they're both Black? Come on now.

It's hard to say which ads were placed first. Did the tobacco company put the cigarette ad next to the cancer PSA to cancel it out? Did the childhood obesity organization put its PSA up there to warn parents about McDonald's unhealthy foods? It could work both ways. Either way, I think it helps people make a choice. Maybe it'll cut down on the lawsuits against tobacco companies or fast food chains. If you see the contrasting ads right next to each other, you have no one to blame but yourself if you make the unhealthy decision.

Emily, I had the same thought. Those women look nothing alike.

Great illustration of why ads are more effective than public service announcements: they're more visually appealing. They're all pictures, they're more colorful, and there's more motion and action going on. The 2nd two public service announcements are text-only, and are less colorful than their ad counterparts. Their layout looks like giant business cards. The 1st one is better because at least it has a picture, but the McDonald's poster has more motion and color.

Is it any wonder that most of us see public service announcements as boring?
Motion, color, and layout seem irrelevant, but we all unconsciously respond to it. We can't help it.

I feel a lot more sympathetic towards any message when I think the person giving the message gives 2 hoots about what's going on in my head. And that's what the ads--but not the public service announcements--communicate--because they take into account what I want to look at and pay attention to.

Big corporations depend on attracting our attention and interest to exist. Maybe they have something to teach us.

I'm not that familiar with the funding of PSA on billboards, but regarding television PSA's a large percentage of them come from the Advertising Council, which is funded by large advertising agencies that work for large corporations. I could imagine a situation where the entity responsible for placing the PSA boards is following instructions to place them wehre they will have the least impact or be counteracted by the more attractive product advertisement.