In my Intro to Soc course I assign K.R. Thompson’s article “Handling the Stigma of Handling the Dead: Morticians and Funeral Directors” (Deviant Behavior 1991, v. 12, p. 403-429). Thompson looked at how those involved in preparing the dead for burial and planning funerals try to manage the negative perceptions they suspect much of the public has of them. Language was a major way they tried to do this–redefining themselves as “funeral directors” rather than “morticians” or “undertakers,” referring to dead people as “the deceased” rather than “the body” or “the corpse,” “casket” rather than “coffin,” and so on. The point was to try to reduce the association with death–to never blatantly refer to death at all.

They also tried to avoid what they felt were stereotypes of funeral directors. Some mentioned trying not to wear black suits, and one man went so far as to keep hand warmers in his pockets so his hands would be warm when he shook family members’ hands–a reaction to what he said was a belief that funeral directors have cold, clammy hands. Others lived in a different town than where they worked and tried to keep their careers secret.

All of this was an attempt to avoid the stigma often placed on those who handle the dead (found in many cultures). We often suspect those who do so, thinking they must be creepy to be willing to do that kind of work. In addition, funeral directors are often depicted as unethical individuals who profit from a family’s pain and who can manipulate people while they are emotionally vulnerable.

I thought of that article when Lisa sent me a link to an article in Obit Magazine about the 2008 Men of Mortuaries calendar, which raised money for a breast-cancer charity: 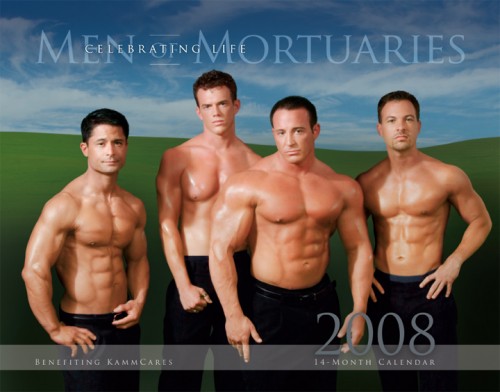 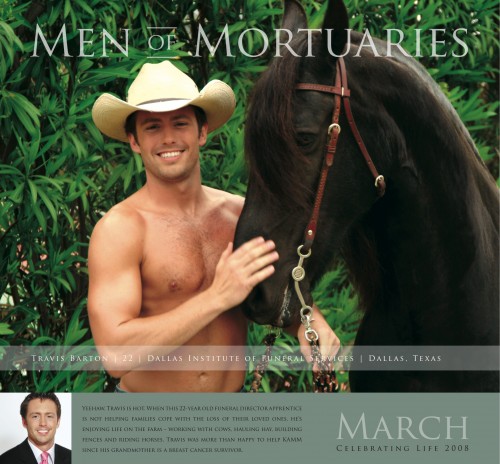 Four hundred morticians and funeral directors from across the country who defy that stereotype sent applications to Kenneth McKenzie’s funeral home in Long Beach, Ca., to vie for a month in the calendar…

McKenzie sees the calendars as a humorous way to dispel the notion that morticians “are gray-haired and hunchbacked with no personality.”

Interestingly, the article does use the word “mortician,” so apparently some in the industry are still comfortable with the term. But overall, I think the calendar and the quotes from the article demonstrate the effort to manage stigma quite well.

CLARIFICATION: In light of a previous post about a calendar featuring nudity, some commenters are conversing about whether this calendar is objectifying or humanizing. That is an interesting, appropriate question and certainly worth discussing. I wanted to clarify, though, that I wasn’t trying to answer that particular question in this post. I only meant to suggest that the calendar was an example of an attempt at humanizing funeral directors in order to manage perceived stigma, which isn’t the same as saying it’s a good or effective attempt (or a bad or ineffective one, for that matter).

lol... this has got to be one of the strangest posts I've read on this website.

I think the "humanizing" element comes from showing individuals in an unexpected light--in exposing another facet of their humanity. When a group of people are viewed as asexual or undesirable, they mind find it empowering to assert their sexuality, even through images which are potentially objectifying.

In a similar vein, sexualized photos people with disabilities, old people, fat people, or pregnant women can all be liberating, in the right context.

That being said, this calendar does play into the notion that only young, trim, white (maybe, I haven't seen the rest of the calendar) men are desirable, which is certainly problematic.

Are there no women of mortuaries?

Morticians (or funeral directors) must make good money -- that's a very expensive horse Mr. Dallas, TX, is playing with. Unfortunately, I don't have the abs to be a funeral director, it seems.

Julian (above) raises a good point. Funeral Directors require at bare minimum an associate's degree in addition to acquiring State License, National Examm and completion of a one year apprenticeship (*That is via Wikipedia, take it with a grain of salt). There are higher level degrees in the field of "mortuary science" as well, even. Graduates with these degrees often are small business owners, more so than other fields (also Wiki entry on "Mortuary Science", but that data is cited as via American Sociological review, so a bit more reliable). The combination of professional occupation plus owning one's own business could make for a lucrative income. Then again, Mr. Dallas, TX may not own that horse, it's just for the photo shoot.

A better question here might not be why did they pick all white funeral directors, but are funeral directors disproportionately white? Why? Are the costs of education and having to start a business harder barriers to overcome for different minorities?

Another question: I don't go thumbing through the websites of scantily clad men or women with any regularity, but I noticed the website for this one had two things I found odd: A biography of the man, his full name, and an email address for contacting him that appears to be his own considering they are all different domain names. This seems to stress he is a person, not just something pretty to look and/or a mortician. Do websites for similar calendars involving women do this? Or are they just pretty faces/bodies with a name? I'd argue that the name, bio (however short and quite possibly superficial), and the possibility of communication look like attempts to ground these guys as not being objects but people. This begs the question: do calendars with women ever make the same attempts?

(The United States is a very bizarre place.)

I have to say that, given all the things minorities might aspire to, being a "Mortuary Man" is not even on the radar.

We'll sit this one out for now.

"Six Feet Under" humanized funeral directors plenty. It was a very funny show. I can think of no one who was moved to enter that field as a result.

If they wanted to humanise their image – maybe photos of what they do outside of the mortuary – playing with their kids, playing a sport, sailing, socialising with friends, working on their degree - you know whatever real people do !!??

By the way where do there get all the hours to work on their six packs? They got dumb bells in the wet lab?

[...] of Mortuaries, which I found in a post of Sociological Images called Attempting to Humanise Funeral Directors, is a fund raising calendar showing 14 US funeral directors doing non-funeral director activities [...]

[...] in an attempt to “humanize funeral directors with the men of mortuaries calendar”. Read the sociological report, or simply visit the Men of Mortuaries website here. Having studied the site (in aid of research), [...]

Well I'm actually a more stereotypical funeral director, so I couldn't ever see myself doing something like this...
Good on them for trying to raise money and lift the stereotype.

Being A Funeral Director, is not an easy job. not all are out for the money... This is a Fact, some people tend to assume that, they can't wait to take in the next buck from the next sadden family.. In my profession ( Working with people who have lost their loved one, doing Funerals, meeting with family, even having meals with the families) I myself have the deepest of all love for one who has died, I have the most compassionate heart in the world in this business and you know I don't even like calling it a business to this day, I never look at it that way mabe I am rare.. but truly I have met hundreds of Funeral Directors and allot are very human.. Doing such a calander I think is kind of neat, makes them different and not only that it raises money I would adore it even more so if they did something like that to raise money that goes to a special fund to aid in funerals of children and babies where the parent/parents do not have to come up with a single dime because there is nothing far worse than seeing a greiving mother or father or grandma or grandpa in tears and that hardship of not only losing a child but the cost, If I owned my own Funeral Home, my funerals would be free for a child or baby, all Funeral Directors know this can be done and I know this as well.. so good for the Calander and the cause, lets see another one for a cause as deep if not deeper than this one...

Men of Mortuaries huh? This is the strangest calander i have ever seen. I mean if it helps to promote money to their businesses and everything else i guess it goes good for them cool beans. But i know that isnt something that I would want to do for my business. Just isnt the way that I would try and entice customers.

I love it and would buy it! Great idea, about time they make somn for the Ladies, it's usually always the other way around!

[…] This is as unfair as accusing all police offers of pastry addiction. It has more to do with how we as a society, especially in America, view death. It is something of a taboo, and so it’s reflected in our ideas about funeral directors. Those who work with the dead get sucked into that mindset. That’s how we get that Grim Reaper image — that black-suited, clammy-handed perception. Of course, this just isn’t true. […]