Andrew Gelman, over at FiveThirtyEight, presents a graph from data put together by Jeff Lax and Justin Phillips regarding opinions about various policies affecting gays and lesbians: 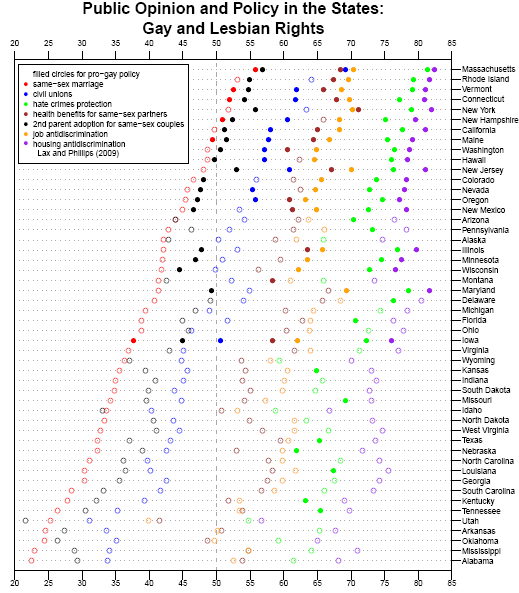 In another post, Nate Silver asks how public opinion about same-sex marriage might change if polls worded the question somewhat differently. Instead of asking “should the government allow same-sex couples to marry?”, we could just as well ask “should the government prevent same-sex couples from marrying?” He suggests that pro-gay-marriage groups might also frame the issue in this way–of keeping the government from taking away rights that people presumably already have rather than as the government giving new rights. It’s an interesting thought, and illustrates the role that question wording can play in affecting how survey respondents think about an issue.

UPDATE: Well, I was taken to task for not providing a better explanation of the graph. However, commenter Christopher explains it pretty well:

For each state, the status of seven public policies is listed as either pro- or anti-gay with seven colored circles which are either filled or empty with respect to the status. In addition, the position of the circle reflects the status of public opinion for each policy.

That is, each color represents one of the policies listed in the legend in the upper-left corner, so, for instance, red = public support for same-sex marriage. If the dot is filled in, it means gay-friendly legislation about the issue was actually passed in the state. If the dot is an empty circle, it means no gay-friendly legislation exists in the state. And the position of the circle tells you what percent of people in each state support each policy.

Ooo, am I glad I live in Massachusetts :P And how predictable is its position!

That graph is worthless at communicating information. I have no idea how to read it. I could make some educated guesses, but they could as easily be wrong as right.

Whoever made that should be chastised.

And you should be too, for slapping it up there without an explanation.

The graph isn't that confusing, it just contains much more information than a graph usually would. For each state, the status of seven public policies is listed as either pro- or anti-gay with seven colored circles which are either filled or empty with respect to the status. In addition, the position of the circle reflects the status of public opinion for each policy.

I have some questions about how they obtained this data, because some of it is a bit odd. Take Delaware, for instance. If there is truly 80% public support for housing anti-discrimination legislation, why hasn't it been passed already? Also, 80%? Really? That's unusually high for *any* issue. I could look up Lax and Phillips study to find out why this is, but you're right: an explanation would have been appreciated.

80% support for something like anti-housing-discrimination laws really isn't unusual. What tends to happen is the vast majority of people say they are against discrimination. When you present them with any specific policy to REDUCE or AVOID discrimination, however, then the % supporting it drops. You can see the exact same thing with race--big differences between supporting a general principle (non-discrimination) and supporting specific proposed anti-discrimination policies. So that might be part of what's going on. It's also possible that legislators in Delaware haven't taken on this issue but that it would be relatively popular, or at least non-controversial, if they did.

I don't see the disconnect, gwen. I can be both against unwarranted discrimination as a point of personal morality, and desire others to agree, while at the same time being against the use of force of arms to cause others to refrain from discrimination, so long as they do not infringe on anyone else's rights in so doing, and since you are not entitled to, for instance, someone else's house, it is not a violation of your rights for someone not to sell one to you for a silly or malicious reason, or for no reason at all.

It is worth remembering that the only thing that distinguishes an anti-discriminatory law from a bunch of people getting together and agreeing that discrimination is bad, is that the former is enforced by people with guns who would rather like to avoid shooting violators in the face, but are perfectly willing to do so if it really comes down to it. Hence, all law is an application of violence, threatened or actualized, and thus rather objectionable to more pacifist citizens, or those who restrict their approval of violence to defensive ends only. Hence, one could be consistent in saying that they are against discrimination, and also against anti-discrimination law, as "should" and "should be forced to" are completely different questions.

Ahh, who do I think I'm kidding? Americans are as statist a people as you could ever want to find, provided of course that you're talking about a state favorable to their personal preferences. The disconnect is due entirely to most people being huge hypocrites.

[...]                 You’re the president. You have the power to give same-sex federal employees the exact same benefits as heterosexuals. Somehow, giving limited rights with a great spiel about equality and this being the right thing to do only serves to make me nauseous. You, especially, should consider how disgusting discrimination is. Had no one stood up for change, you would not be able to be president, nor would you have been able to be a Senator before. Your life has benefitted from the civil rights granted by others. Mr. President, the fight for civil rights is not over. [...]

Duran, you suck at reading and by extension communication and by extension life. So: 1 go take a reading course, 2 come back to this page, 3 read this page, 4 think, 4.5 understand, 5 stop bitching, 6 chastise yourself for being formerly stupid, 7 congratulations you no longer suck at life