I found this list of rules posted by the Lansing, Michigan, Chief of Police in dance halls during the 1920s in Allan Brandt’s book No Magic Bullet: A Social History of Venereal Disease in the United States Since 1880: 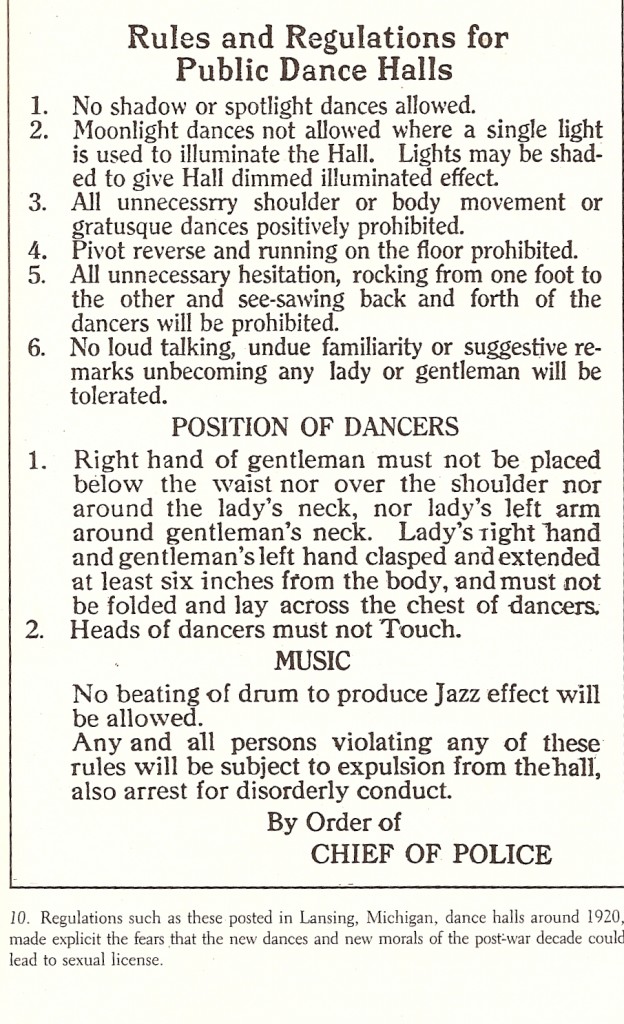 I don’t know what a “gratusque” dance, from point 3, is–maybe “grotesque” spelled incorrectly?

Notice the association of jazz with sexual impropriety. And although I think most readers, like me, will read the list and laugh at the fact that people thought dancing was so problematic, keep in mind that there are still many people who do. In college a friend told me he had never been allowed to go to a dance of any sort because his parents were from an evangelical Christian group that thought dancing was evil and led to sexual promiscuity. He’d also never eaten a single piece of Halloween candy, which horrified me way more than never going to a dance. I apparently am a tool of evil because I insisted that he enjoy the pleasures of Halloween candy for the first time. Next thing you know, he was drinking and smoking pot, proving that candy is a gateway drug.

I see similar signs posted outside bars in my downtown area, in 2009. They're not about dancing, but about dress code. One sign has a detailed 15-point list that always makes me laugh at its specificity: no clothing with any athletic logo, no tattoos on the neck or face, pants must fit properly, absolutely no baseball caps, etc. The sign is outside a casual bar, where I've seen people in flipflops and ratty T-shirts, so it's not a formality-enforcement thing.

In this city, organized gangs identify themselves with tattoos and the gear of a specific sports team in a specific color. So I assume the sign is trying to prevent gang members from visibly displaying their affiliation, or easily identifying cohorts and rivals. Maybe the bar owners had trouble in the past.

It's odd that the sign doesn't just come right out and say: "Don't bring that gang banger crap in here". I guess they have to be very specific so they can point to the rule when denying entry, rather than risk trouble for discriminating against someone based on vague assumptions. On the other hand, it's a privately owned bar, and I think that means they can be as discriminatory as they please, so I'm not sure what the deal is.

Anyway, the "Jazz effect" sign above reminded me of this. I propose the sign wasn't about jazz or where a spotlight could shine, although that's what the words say. It was about controlling the appearance and relationships of patrons to fit someone's idea of acceptable public behavior.

A club in my town also has dress code like the one Cycles describes. I haven't looked at it in a while (I'm too young to go to clubs and only know about it because there was controversy when the rules were instated), but I remember there were similar restrictions against baggy pants, large T-shirts, etc.
The thing is, my town--a college town in central Pennsylvania with a local population of about 40,000--isn't exactly a hotbed for gang activity.

Reading the Rules for Dancer, I suddenly heard a nun in my head saying "Leave room for the Holy Ghost!!"

"no clothing with any athletic logo..."

I bet they don't stop people in shirts with foxes or polo players on the breast, though, so there's no doubt that rule's pretty racialized.

Wow, I wonder what my Maori student would have thought of that one?

I totally get the point about controlling possibly sexual behaviour on the dancefloor, which was a huge issue in the 20s and beyond, but rules 4 and 5 reflect the overwhelming popularity of dancing, and the overcrowding of dancehalls, at the time. People tempted to show off with some fancy moves - such as reversing, running or hesitations of whatever description - would disrupt the regular circulation of dancers and could result in pile-ups or even fights!

If you've ever seen any footage of dancehalls in those days you would realise how packed they were - most dancing couples were just shuffling round the floor practically shoulder to shoulder and any flashy moves would have caused chaos! So those rules at least were probably more about crowd control than morality.

Vidya: Exactly. I asked my friend who goes there frequently, and she said she never gets denied access even though she directly violates the dress code all the time. She's white, in her thirties, middle-class, not in a gang. She gets in because she doesn't violate the code "in THAT way (nudge nudge wink wink)."

The dress code allows them to use personal discretion in granting access, but then have a specific reason when access is denied.

I don't want to make a huge thing out of it, because this bar actually seems to be frequented by people of all walks of life, ethnicities, political leanings, etc. Rather, it's a striking example of a general concept: identifying and forbidding the trappings of membership in a group in order to keep that group away.

But it is funny that, despite the prohibition against sports logos, they have posters of local sports teams plastered all over their windows, and their TVs show the games. Heh heh.

A dress code posted and enforced by a bar owner is quite different than a code for dress and dancing enforced by the police. Where were the libertarians in the 1920s? Or did they succeed in ending such ridiculous stuff?

I guess dancing back then must've been pretty exciting with all the possibilities for rule breaking.

I've said for years sugar is the gateway drug. Glad I now have PhD. concurrence =)

These rules -- or types of rules - still exist in many churches today. I'm 40 and was forbidden to go to dances in my youth.

That reminds me of the movie footloose dancing was prohibited!

The issue remindes me of movies like dirty dancing and footlosse
dirty dance was in the 1950 or 1960 when unformal dance was tobbo. Formal dance with rule like the above article was the norm.
Footloose was about a little bible belt town who viewd dancing and drinking as a sin.
chief must be from the 1950's
The bar in in owensboro called 6o west has rules and dress code and other little rules I dont personal know what they all are I don't hung out there; It is just what I 've heard.

All part of the great convulsion of paradigm shifts we make in America and the rest of the world, post-traumatic paradigm shift, of the greater depression, hidden in the folds of the next naturally predictable and expected economic down cycle of our capitalist economy today, to follow! Chastised by a great cleansing then, our sense of values will either go towards that of the poor religious puritan, or we will be cast into an immoral Hell, much like we see in the street-gangs of today, females disrespected, no longer the late great hulking American Neanderthals soul-mate, Mother of his ilk and held in high esteem and much respected and defended to her old age and demise, but a piece of mexicano street meat, community property, for abuse, multiple partners, willing and ready or accosted, and wounded in savage and deprecating ways, early sterility, easy accessibility to all, for sale even, if convenient, and used roughly, repeatedly in public gang rapes, for a sickening status and survival, and bestiality anal sex, two partner simultaneous and even three, not uncommon practice for the heathens, and rejected or beaten to miscarriage if found pregnant yet still, somehow, sexually desirable, and never fed, but born to slave to feed, never served, but born to serve, hand and foot no matter how degrading, the lesser than Muslim position in her society, graciously sucking what is thrust at her, on her knees, not down before a Christian God, but a crowd of dirty unbathed eager and erect animals, and smiling all the while and cavorting in sexual excited fashion, not to be beaten to death in dissatisfaction by any one of her suitors at any time! The New America! Drunken Drugged, and out of control! The seeds of this are in our streets today! We do nothing of consequence! Our courts in self-service, hand out nothing of consequence! Why! Where did we go wrong! Will this avalanche in harder times to uncontrollable disaster? Is this beast, just beneath our skins, controllable, will he be set free? Put in control by the unwitting? Will the glory of the Great hulking American Neanderthal and his precious family values be lost and, in his extinction by the corporations, will we export 12 year old daughters to graciate Arab Princes for Oil? Only the blue-eyed blond ones they demand? Will "Motherhood” become a cursed estate for chemically infertile, easily accessible females, pregnancies unwanted, nation building be damned, and aborted at detection, no questions asked or answered? Will men run like beasts in the fields, uncaring, for only sexual satiation/? Will the notion of "Love" for a woman become as dated and unfashionable as weekly church attendance! Has this already occured in the great Multi-National corporative patadigm shift for the American people? The Chinese? The Indians? Is this the great change upon us? Predicted, all these ages? Are we facing the new Chinese communist Empire already, in the streets of America? Have the Corporatists taken us, shots not fired, morally as well as economically? Will we soon print "Made in Chinese America" on our tags? Is GM(America) really on welfare? Does GM(China) really drag in 30% profits for our American Capitalist Investor Class each year? have we failed already, America? I think so! The man at the helm called for Christian consideration for our fellow man! Medical services, decency in death and morphine for the poor in dying! We bucked, hemmed hawed, pressed wallets to chest, and turned away! Sick Sick bastards! Cowards! every fat assed oversized, well to do one of us! For Shame America, in an America that can no longer even feel shame! The great abyss opens! It swallowed the whole U.S.S.R. in less than a decade, and left impoverished rubble behind! Before the fourth turning in America, and during the greater depression, our immorality and its noises will bounce off the walls of Hell as the great chasm closes over our heads too, and the rubble left behind, has a harbinger of those days to come, here and now, for America to wittiness to, SEE: http://uprooted.jessicareeder.com/2009/09/detroit-and-the-100-dollar-house/comment-page-1/#comment-3003 Don't take my word for it at all! Do we still have choices? I think not! They are made for us not at our polls, with our votes, but at stock holders meetings where their votes, votes that really count, and by lobbiests, buying and selling both our political parties, at will, with ease, for financial and convenience favors: We are but the semi-slave pons in a terrible sick drama gone wrong! The soon extinct, Great hulking American Neanderthal, born 200 years ago, bred to rapid glory by Corporatism, Capitalism, slain by the same and forsaken by them, for cheaper, smaller, lighter, Asian semi-slaves, and left to his own devices, the devices of Hell and destruction! Sad.