Fanta Flavor Is “Inspired by Jamaica”

Birdseed sent in this photo he took at a grocery store in Stockholm (which he posted at his blog as well): 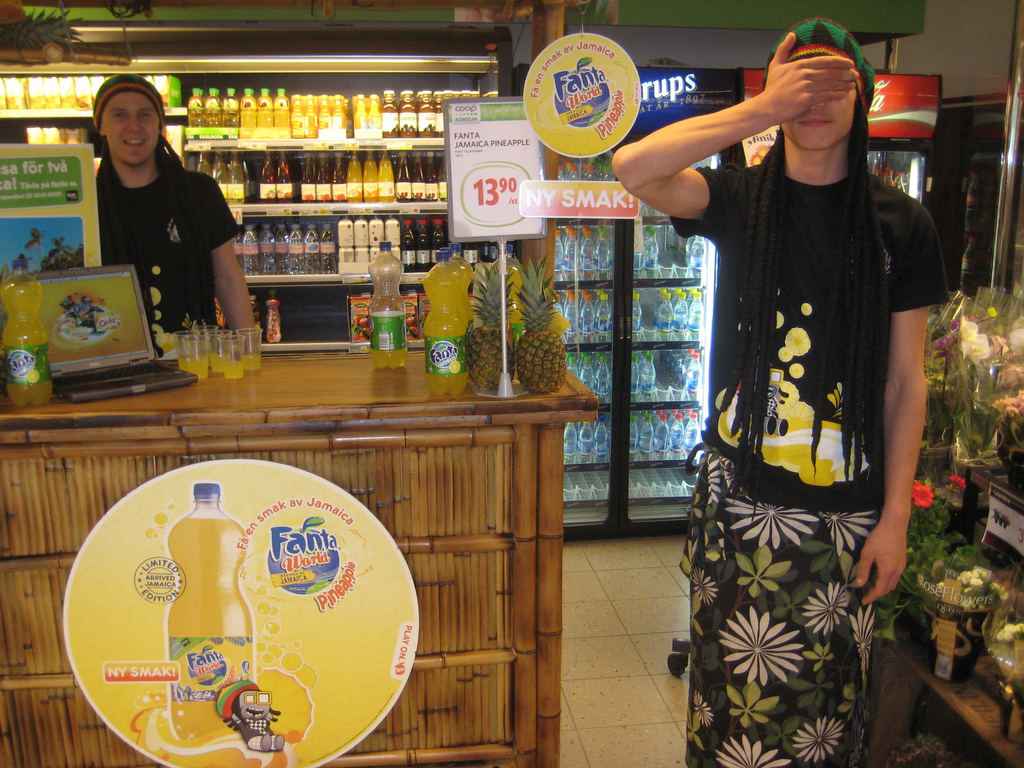 The product is a new beverage, Fanta World Pineapple: Inspired by Jamaica. The two guys in the photo were hired to promote it at the little tiki-style counter. Johan says,

A couple of things leap out at me straight away:

* The continued (post-)colonial association of Jamaica with its plantation produce. The “inspiration” seems limited to the fact that pineapples are grown there for the consumption of the global North. (Canned goods like pineapples still have the charming moniker “kolonialvaror” (colonial merchandise) in Swedish retail jargon.)

* The ridiculous (verging on blackface) stereotypical representation of “Jamaicans” that the kids are suppsed to portray. It seems to have been done with extreme sloppiness – for instance, the Polynesian lava lava (a type of sarong) that they wear has absolutely nothing to do with Jamaica at all, but rather acts to represent an identity-less generalised tropics, dehumanised exotica.

The music was, of course, bad reggae.

I think Johan hits on an important issue here–how often the cultures of non-Westernized countries are mixed together into an undifferentiated image of exoticness–for instance, “tribal” fashion and “traditional” handicrafts often supposedly represent “Africa,” which is a meaningless category given the enormous diversity of cultures, languages, clothing styles, artistic motifs, and so on. But if you put some geometric designs and maybe an elephant on some cloth, it evokes “Africa.”

it’s also interesting that a certain hat shape and dreads have become such easily-identifiable shorthand symbols of Jamaica, and that Fanta is commodifying the idea of Jamaica to sell a product that has no reason to be more “inspired” by Jamaica than anywhere else pineapple is grown–Hawaii, Mexico, Costa Rica, etc. etc. etc.

Fortunately, Jamaicans never wore dreads. Next theyll be using the Statue of Liberty to identify the United States of America.

Lots of people in lots of places wear dreads. There's no reason that we should automatically think "Jamaica" when we see them, except that they've become a symbol of Jamaica and not of other places where people wear them (including the U.S.).

Considering the origins of Fanta, this is just par for the course, no?

Thanks for posting my pic.

One more thing, I think, which is interesting to question is why we feel the need to depict Caribbean people as particularly laid-back beach types. It seems to me that this is the same mechanism which in Minstrel shows would have the "Jim Crow niggers" appear as being extremely carefree and musical - an assuaging of collective guilt, I guess, or a justification of colonialism/slavery ("they're very simple people").

I've tried following up the association between minstrelsy and dressing up as a Jamaican in a follow-up post on my blog:

Is it really so wrong to associate dreads with Jamaica? Dreads are an important part of rastafarianism, which originated there, and is still a popular religion/way of life on the island. The whole of the display was tacky/tasteless, but dreads seem to be a pretty inoffensive thing to associate with Jamaica. While its obviously a quick, short cut short hand, it doesn't seem in and of itself to be racist unless placed in a context that belittles those who wear them, either for religious or aesthetic reasons (which the fanta display does).

t.u.--I wasn't implying that isn't inherently problematic, only that it's interesting to me that it's become an automatic symbol of Jamaica. I like to show my students examples of symbols in use, as well as racialized or national symbols, so I notice things like that if I might be able to use them in the future.

At least there is some connection, no matter how politically problematic, between Jamaica and pineapples. There's a cartoon mascot character on boxes of Apple Jacks who, for reasons I cannot begin to explain, appears to be a cinnamon stick with dreadlocks and a rasta hat (my wife calls him "Jah cinnamon stick"). I'd probably find it more offensive if I didn't find it so baffling.

Hmm. In South Africa, Fanta pineapple is a regular flavour, along with grape and orange. But we did have the promo with Fanta and other flavours. Apple Fanta was Jamaican apparently and ruby grapefruit Japanese. I suppose any fruit would do... But then again, I never saw an in-store promotion like this.

However, there's a whole franchise of bars called Cool Runnings with a Jamaican theme (Bob Marley on the walls, a menu with bad attempts at Jamaican slang, a tiki-style bar). It's mostly populated with young white students who smoke weed.

I have a question, I hope that's okay? I wonder how this correlates with other "shorthand" for nationalities, for example, jeans and sneakers with Americans or tea and sweaters with the UK and so on?

There are symbols we use to depict lots of nationalities (think of horizontally striped shirts with a beret for France). When I went to France as a naive 19-year-old, I was quite disappointed to discover that people in France do not appear to wear either of those things.

jfruh - I always thought the cinnamon stick guy was Jamaican, too. If I remember correctly, they gave him a little accent, right? Since when Jamaican people say "man" with the accent it sounds like "mon" to, well, Americans I guess, so he's cinna"mon". By the way, I'm pretty sure Jah is the word Rastafarians use to call God (I'm Jamaican but not a Rasta), so I think it's a little strange for your wife to call the cinnamon stick guy that...

[...] was that appropriation? Is it appropriation when Malibu Rum, made in Barbados by a French company, uses images (some would say stereotypes) of Jamaica in its American advertising? Perhaps appropriation is the [...]

[...] was that appropriation? Is it appropriation when Malibu Rum, made in Barbados by a French company, uses images (some would say stereotypes) of Jamaica in its American advertising? Perhaps appropriation is the [...]

[...] We added two commercials for Malibu Rum to our post about the commodification of Jamaica and “island culture.” [...]