Nate Silver at FiveThirtyEight put up an image that illustrates the findings of a recent survey by George Mason University’s Center for Climate Change Communication.This inverted pyramid shows the percent of those polled who said they think global warming will hurt each group “a great deal” or “a moderate amount”: 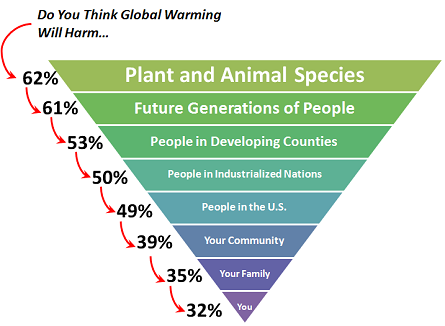 So as we see, the closer the question got to the person answering the survey, the less severe they thought the impacts of global warming were likely to be. Silver says,

But if individuals don’t perceive climate change to really have negative consequences for them or their families, they may not support climate change policies if they fear those policies will hurt jobs/business in the short-term, since they may be more likely to see the economic impacts as personally problematic.

UPDATE: An anonymous commenter pointed out that the 538 pyramid is a bit misleading. Brad Johnson at Wonk Room created a more representative one: 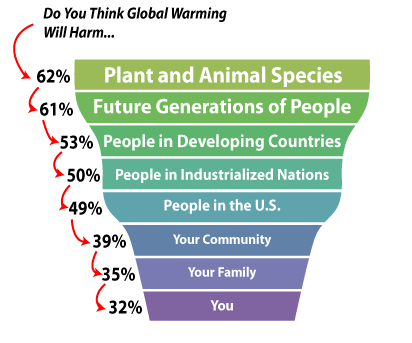 Thanks for the tip!

One way of looking at this is to say that people appear to be irrationally underestimating the impact of climate change on themselves rather than others.

This kind of overestimation is common, for example in polling concerning the economy. When people are polled on the state of the economy large numbers of people say that they are doing well, but perceive others to be doing poorly. Since people have complete data about themselves, but not about others the implication is that people tend to be pessimistic about how others are doing.

If the same dynamic is at work here it is not necessarily bad news for those concerned about climate change. People have a tendency to vote altruistically when it comes to economic policy (e.g. the popularity of socialist policies such as universal healthcare even though the majority of the population already has healthcare. ) This tendency could actually improve the chances of policies intended to counter climate change.

I'd like to see this coupled with a survey of the climatologists.

Personally, I live in the northeast, about 20 miles inland. I don't think I'll be affected too much, as I'm already used to a wide range of temperatures and don't live too near water. However, I expect the systems I live on as a whole to be affected, leading to higher food costs and that sort of thing, which seems mundane and petty compared to people who are living in developing nations who will suffer more severely and directly.

For the record, I consider myself an environmentalist and try to be green when I can.

I wonder how the results would look if they polled about something that is relevant, such as pollution.

CO2 is not pollution, nor is it much of a greenhouse gas, so it doesn't count. Research the infrared absorption spectrum of the CO2 molecule and compare it to that of water vapor if you don't believe that. Also ask yourself why CO2 is blamed for rising temps when the historical record shows temps rising ahead of atmospheric CO2 levels. Seems we've put the cart before the horse.

Also, the warming trend may well be over in the sense that a cooling off period may be on the horizon (the next 50 years or so) due to the Sun's decreasing output which is approaching the level of the Maunder Minimum and the Little Ice Age that apparently resulted. The climate is certainly still going to change because that's what the climate has always done, but this whole global warming nonsense has diverted attention (I suspect that's not an accident) away from important issues that we can actually have an impact on in terms of mitigating potential environmental damage.

You know what's really bad for plants, animals, humans, and future generations? Clearcutting forests, wetland destruction, toxic pollution, monoculture food production (esp. GMO organisms and Monsanto's patented 'Terminator gene'), vast nuclear weapon stockpiles, the Texas-sized whirlpool of plastic garbage swirling in the Pacific, religious fundamentalism, and gay marriage. I'm kidding about gay marriage but to some people that really is a big deal, but that's probably because it's a simpler issue to grasp and abstract enough for most people to have an opinion about but not feel particularly connected to, kind of like our carbon dioxide emissions.

Hmm, so in a way the greatest threat to civilization and the environment is indeed hot air, just not the kind we're worried about.
http://science.nasa.gov/headlines/y2009/01apr_deepsolarminimum.htm

Yeah, we've heard all the AGW-skeptic arguments before, selectively stating facts, and ignoring anything that flies in the face of their prejudices.

Come back when you've read IPCC-AR4, at least the SPM from Working Group 1.

Have we now? Or were you describing that movie starring the guy who could barely pass math and science (Al Gore)? And do you really think I haven't already read that report? I was a Believer, then I researched the science and became a Heretic. Follow the money.

Of course it's not the Sun that changes Earth's climate, it's us! I'm indeed skeptical, but you talk of skepticism as if it's a bad thing, kind of like a religious leader does. I'm not saying the climate's not changing, just that the change is not caused by humans and is cyclical. The Sun's output peaked a few decades ago and has been declining since then; this is a fact. I notice that the air warms up when the Sun rises and goes down when it sets, so the Sun does seem to have a noticeable effect here on Earth and cycles in its output would be like miniature sunrises and sunsets, analogous to how adjusting a dimmer up or down on a light has a similar (but less dramatic) effect to turning it on or off yet the Sun has only recently become a part of the discussion.

A take on the propagandistic aspect of the report that is interesting can be found here: http://intelligentessays.blogspot.com/2008/03/anthropogenic-global-warming-propaganda.html

An excerpt: "The IPCC deftly presents all of the calculations, though nearly each one contains a caveat explaining that the models employed are lacking significant data or the phenomenon is too complex to accurately model."

I've read your suggestion, do you have the stomach for my links that stink of blasphemy?

And here's a response to that blog post -
“If you care about climate change forget about ‘saving the planet’”
http://tobanblack.net/blog/?p=40

The 538 pyramid is a bit misleading. It's not to scale: http://wonkroom.thinkprogress.org/2009/04/27/environmental-pyramid-corrected/

For what it's worth, Village Idiot, have you seen these?

http://www.grist.org/article/series/skeptics/
http://www.realclimate.org/index.php/archives/2005/04/water-vapour-feedback-or-forcing/ (realclimate also has a "skeptics" category, and a list of highlights in their menu that cover other skeptical claims)
http://climateprogress.org/

As long as you're following the money, remember that (at least at the moment) the fossil fuel industry has a lot more of it, and stands to lose a lot more through climate measures than most of the people arguing in favour of them could gain through the alternative energy industry.

Also: scientists have been saying that CO2 is a warming agent since at least the '50s. That particular aspect of the science is pretty much beyond debate at this point.

And just to add (I apologize for the double-post) - Ocean Acidification is a product of increased CO2 levels. Even if, as you say, CO2 doesn't cause any significant global warming, its rising levels are already doing damage to the ocean, resulting in some pretty serious dead zones. If we keep pumping CO2 into the atmosphere, those dead zones will only get larger.