Ryan sent in a story about the video game Border Patrol, in which you try to keep three types of Mexicans from crossing the border: drug dealers, Mexican nationalists, and “breeders,” who are of course pregnant women on their way to the welfare office: 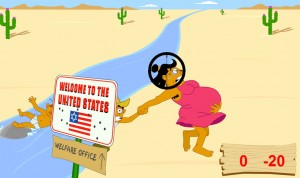 According to Kotaku,  a city representative in Georgia emailed it to colleagues with the following note:

And the Star of David on the American flag is a nice touch.

NOTE: A number of commenters have made various suggestions about what the Star of David might mean–support for Israel, a conflation of Jewish and Christian values as “American,” etc. I don’t know for sure, but my best guess is that it’s an added little bit of racism. If a few of my relatives are any indication, anti-immigrant and anti-Semitic sentiments often seem to go well together. One of my relatives who is virulently anti-immigrant also once gave my mom a video to watch and when she turned it on she realized it was this anti-Semitic thing about how Jews are trying to institute a New World Order. So I tend to think it’s supposed to indicate, as one commenter said, that the U.S. has been weakened and taken over by ineffectual liberalized Jews who are letting all the immigrants in as part of their master plan to….well, I don’t really know what the master plan is. I will see if I can find out when I visit my family members and let you know so we can all prepare. Or, for our Jewish readers, take part, I guess. Oh, wait, duh. Our Jewish readers already know. I forgot. One of my long-lost relatives from Arkansas explained to my mom how Jews communicate through all the symbols on packaging (you know, like TM, (R), and so on) to spread instructions for…well, again, since I don’t know the Mysterious Master Plan, I don’t know what the instructions are about. My poor mother has asked me on multiple occasions why people seem to think she’d want to hear bad things about Jewish people. My mother has her faults, but anti-Semitism isn’t one of them, so I’m going to have to chalk it up to the bad luck of being related to a lot of crazy racist people.

Anyway, that was my rambling way of saying I don’t think the Star of David on the flag is a pro-Israel thing.

NEW! (Oct. ’09) Katie J. sent us a link to the video game El Emigrante, in which you (in sombrero) ride a bike and try to avoid the police after you jump the border wall: 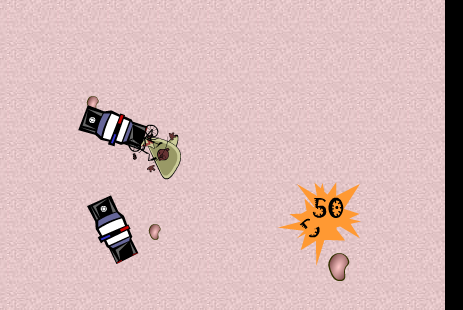 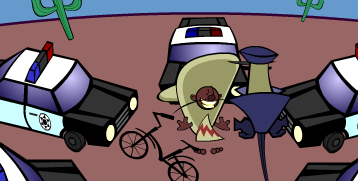 but i'm from England, apparently that makes my sense of humour different

This strikes me as being way too disturbing and f*cked up to be ironic... but I am also confused about the star of david.

The armpit hair on the woman is a nice touch. "It's bad enough that she's coming into our country to steal our resources, but... hairy pits on a lady?? That's going TOO FAR!"

Man, I could write an entire paper on that armpit hair. Seriously semiotically rich.

Elise - I had the same thought. Thanks for giving voice to it!

The first thing I saw was the Star of David on the flag; I couldn't make sense of what was going on outside of that before I read your post. (I thought the "target" on her head was something that had been added to call attention to something in the image.) I'm trying to figure out the politics of this game: seriously racist and xenophobic, but is the Star of David supposed to be pro-Israel or anti-American?

It doesn't matter, ultimately, what the Star of David on the flag means. What matters is that there's a video game that involves shooting unarmed people for fun. (I'm not anti-video game. I'm not even anti-shooting games. I just don't think it's right when the people you're shooting don't have the in-game option of shooting you back. The fact that this game takes place in a real place and time only adds to the disturbing nature of the thing.)

I get upset whenever I see the kind of conflating of religious and civil values evidenced by the use of the Star of David on the flag. To me, it seems to indicate that keeping Mexicans out of the United States is an expression of "Judeo-Christian" values. I don't buy it, but that's my best guess.

Whether or not this has any relation to Christian values (though I don't think it does), as a Jew, I'm always bothered by how Jewish and Christian values are conflated on issues on which the two religions generally have disparate views.

My best guess on the Star of David thing is the stereotype of Jewish people as being wealthy, intellectual, and liberal. So with thatin mind I would take the flag as whole to mean that the liberals have control of the country, obliterated states rights (because it is one big star instead of 50 smaller ones), and put welfare offices all along the border for the 'illegals.'
But yeah. classy.

I think I figured out the deal with the Star of David, and it's not pretty:
http://www.motherjones.com/media/2007/08/all-your-political-base-are-belong-us

I'm pretty sure you're right about the Star of David indicating that the US is ruled by Jews. I have on occasion perused racist websites, and the basic idea here is this: racism = strength, anti-racism = weakness = liberalism. Jews spread liberalism in order to weaken whites. Black and Hispanic people are already weak because they're stupid and unruly. With everyone else weak, the Jews can then take over. So whites must stop non-whites from coming to the US so that we can return as a nation to the 50s and get back to being a Great Western Civilization.

I know. The stupid, it burns.

[...] just came across a post at Sociological Images about an outrageously racist flash video game called Border Patrol. They note that in the game, [...]

[...] trying to cross over the border into the United States as you can.  As mentioned in a blog from Sociological Images, your main targets are drug dealers, Mexican nationals and pregnant women, referred to as [...]

[...] trying to cross over the border into the United States as you can.  As mentioned in a blog from Sociological Images, your main targets are drug dealers, Mexican nationals and pregnant women, referred to as [...]

[...] just came across a post at Sociological Images about an outrageously racist flash video game called Border Patrol. They note that in the game, [...]

I'm sorry, I know this is a little thing, but did you have to point out that your (somewhat backwards) relative was from Arkansas? Would you have bothered if they were from Washington? Or New York?

Arkansan doesn't actually = "crazy redneck racist," but here it seems like you're using that stereotype, which IS associated with Arkansas, as part of your argument. Is that not a little like the game?

It looks very interesting. I will try it on https://apkmouse.com

What a fun game, similarly you can download the fun fun game mod apk at Gamestoremobi click here and search for your favorite game

I want to play it. Damn shame the pricks took it off the internet.