Social Class and the Economic Crisis

I came across this great photo at BAGnews NOTES, entitled, “Reflecting on the Meltdown”: 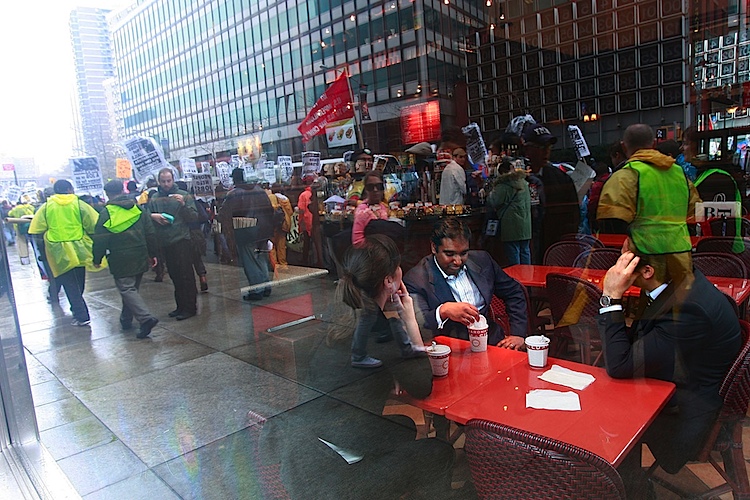 The author describes the photo and its meaning this way:

It captures a two-day anti-capitalist rally protesting the Wall Street bailout. Through the use of reflection (in this photo of a restaurant, as well as this one playing the street off against a corporate lobby), Mario [Mario Tama, Getty Photographer] portrays America’s class schism (note the guy in the lime-colored reflective vest overlapped with the guy in the jacket with the wristwatch); America flip-flopping between awareness and denial; and the strange disconnect these days between crisis and ‘business as usual.

This is a wonderfully telling picture, but perhaps in addition to “America flip-flopping between awareness and denial,” one could also interpret the artistic use of reflection as representative of the ever-widening chasm between the social classes in the United States – one that will most likely not be remedied or even addressed in the near future.

Uh. Nothing says luxury like a coffee in a paper cup, on a tablecloth-less plastic table strewn with paper napkins. *Shrugs*

^ Yeah that's exactly what I was thinking. Plus, that table looks dirty. Just because they're in suits doesn't mean they're rich. I think this photo fails.

The idea that anti-capitalist protesting = awareness, while drinking coffee = denial is ridiculous and offensive to those of us who have even a remedial understanding of economics.

I'm in complete agreement with the commentors above!

And no love for the person of color drinking his coffee preparing for a day at work?