Legal Drinking Age Around the World 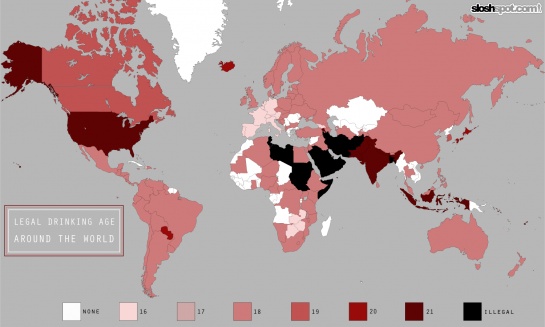 UPDATE: Just FYI, lots of people have identified inaccuracies in this map in the comments.

Last time I checked, you had to be only 16 in Denmark to buy alcohol, except in bars where you have to be 18. I guess this chart shows the average.

I remember having a discussion about the drinking age in Iceland in school, and most of us (students) agreed that it was silly to be allowed to marry, drive and have a child (BIG responsibility) at 18, while we were not trusted with drinking even just one bear with dinner until 20 years old.

Was about to say the same about Denmark.

Also, Greenland is Danish territory and works with Danish laws, so... no white Greenland this time around.

It's probably a good teaching opportunity to talk about the compromises that have to be made when displaying information graphically... The data for the graph comes from here, where there are additional notes. For instance, alcohol is illegal in Pakistan for Muslims, but apparently 21 is the drinking age for the non-Muslim population.

Sloshspot also apparently used "white" to mean not just "none" but also "no data" (since, e.g., Madagascar, Cuba, and North Korea all don't appear on the aforelinked page). I'm inclined to doubt that Cuba and North Korea have no limitations on who can drink.

France has just raised its legal drinking age from 16 to 18 (the majority age). More precisely, it's now illegal to buy alcohol (and cigarettes too, by the way) when you're under 18 ; but i don't know if it's illegal to drink (or smoke) ?

Another consideration should be how harshly enforced drinking age is. In Japan, legal drinking age is 20, but nobody cares if you are younger and want a drink. Bars don't ID, convenience stores sell to people wearing high school uniforms, and vending machines have nothing to stop an underage person from buying alcohol. For the most part, it works out well as alcoholism and drunk driving isn't a very big problem, but drunk driving is taken VERY seriously.

America (my home country) is almost the exact opposite where the 21 rule is strictly enforced, drunk driving is not that bad of an offense, and alcoholism is a big societal problem.

They've got it wrong for Canada. It's province by province, and in Quebec it's 18.

It's also eighteen in Manitoba, and possibly a couple of other provinces, though most of the country is 19.

in romania it's 18 years. In hungary, too. Believe me, I live in these places.

While I agree that a 21 year legal age is not practicable on many levels and creates some inherant contradictions in terms of age of consent and responsibility (especially on college campuses), lowering it back to 18 (or even 19) is not a panacea either. It will more than likely simply move the big problems back into high schools and junior high schools.

Another issue I run into often in the belief that having a lower legal drinking age equates with a lower incidence of problems. I work with college students as a health educator and you should hear how many of my students rhapsodize about the lower ages in Europe and how everything is better there. Well, to be blunt -- it's not. They're experiencing the same kinds of problems as a result of high risk drinking as we are. I really wish that people would stop equating the two.

Another inappropriate use of the Mercator projection here--a map that represented area more uniformly would make more sense for the display of this data.

Keith said in the states "drunk driving is not that bad of an offense". I think each state handles drunk driving differently. In Michigan you end up owing the state thousands of dollars. They have this thing called the driver responsibility fee. http://www.michigan.gov/driverresponsibility.

In Germany it's also a little more complicated than this map indicates: Actually, it's 14 for beer and wine as long as you're with your legal guardian or someone designated as watching over you (i.e. an aunt or a parent's friend).
When you're 16, you can buy beer, wine and other 'soft' alcoholic drinks over the counter or at a bar, while the law requires you be 18 for buying liquor and other spirits.
The policies are usually enforced by having you show your ID (so it's no alcohol if you don't have your ID on you), though bars tend to be a bit more relaxed.
In my experience, it always worked pretty well. Of course, we do get drunk when we're still teenagers, though the fact that it's legal lessens the temptation of drinking in secret and going over the top.
My experience from British universities is that it's much worse there, as the students reach legal drinking and driving age at the same time, the novelty of drinking hasn't worn off yet, and they're away from home. Excess ensues… I for my part was quite surprised by the amount of alcohol downed in short periods of time over in the UK, though that seems to be a cultural thing, sort of an inbuilt urge to get as drunk as possible before curfew (not that there really is one any longer).
So, to cut a long story short: I don't think legal drinking age has anything to do with how responsibly we handle the stuff; as far as I've experienced, the French seem to be a lot more relaxed around alcohol than the Germans, the British a lot less (well, they do tend to get very relaxed once they've reached a certain level, but that's not the point) – and from what I've read, it seems a big thing in the US to get absolutely hammered once you turn 21… with the usual consequences and no more responsible behaviour than displayed by other nations.
I would argue that it is really down to the values which a culture bestows on alcohol, and no so much the age of consumption (i.e. forbidden fruit or a mundane part of a meal/social gathering). But I'm afraid that's not exactly news, is it?

I find the choice of colors rather irritating. I know what the designer had in mind, and maybe it's just my eyes, or my monitor settings, but trying to decode a bunch of different shades of the same color just isn't my cup of tea.

Re: Keith and America: In my part of the country, drunk driving is a very serious offense with minimum penalties enforced. Not to say that people don't do it...

I wonder if a map could be drawn showing the correlations between drinking age and other civil liberties. The countries where drinking is banned may have less alcohol-related problems, but I bet they aren't much fun either.

[...] with no drinking ages whatsoever, but rather the ones where it’s absolutely illegal. |Contexts| TAGS: MAPS Previous [...]

Its incorrect for several provinces in Canada - Manitoba, Alberta, Quebec are all 18. Did they take the average?

what is the legal age to drink in Pakistan?
how old do ou need to be before you can purchase alcohol in Pakistan?

I was 12 when i got arrested for drinking and stealing my moms car to go on a joy ride.:)im happy and billy the giant walrus ate my kit kat

I think it would be best if in the USA more parents would let their children drink beer at home at a younger age such as 16 so that their first experiance alcohol is not laying on the ground in frathouse with somebody drawing who knows what on their face. I think Germany is pretty good about drinking laws because they realize that the main problem with drinking is crashing cars and irresponsible friends and their laws seem pretty reasonable also because the drinking age for beer and wine is 16 but the drinking age for hard liquor or schnapps is 18 and let's face both in Germany and in the US people drink alcohol with their parents consent at home occasionally and no you don't get knocked out after one glass of beer. The problem in the US is that it is built around the car.