Nationalism, Immigration, and the Battle for Britain

Brady sent me a link to a story in the Times Online about a poster put out by the British National Party, a right-wing anti-immigrant political party. Here’s the poster (found at the BNP website): 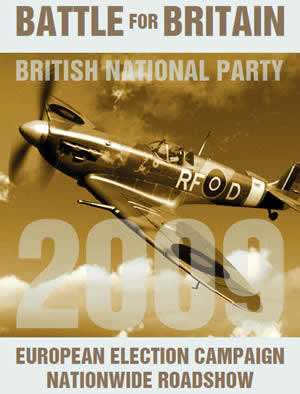 They’re clearly trying to connect efforts to defend Britain during World War II to the idea of a modern “battle for Britain,” which this time is against immigrants. However, they missed a detail when the chose the image for their poster, according to the Times story:

[The plane] could be clearly identified by its RF marking as belonging to 303 Squadron, an expatriate Polish unit, even though the BNP campaigns against immigration from Eastern Europe.

The BNP claims they knew it all along and did it on purpose; others believe they’re just trying to cover an incident that they find embarrassing.

Regardless, it brings up interesting questions about nationhood and definitions of who can be included in a country’s idea of its history. In the imagining of the BNP, would immigrants’ contributions be erased? Would they be acknowledged, but only as something that was appropriate and welcome in the past? After all, one of the very groups they’re vilifying played a role in defending Britain during the exact era that the BNP is trying to symbolically connect itself to. I suspect they might try to make an argument that the ex-pat Polish fighters were involuntary and temporary refugees that were being protected by Britain during a time of warfare and were in fact fighting to retake their own country, which is different than permanent immigrants who take British jobs and mess up the culture and whatnot, but that’s just a guess.

Of course, this isn’t something unique to the BNP; nativist groups everywhere face the problem of having to erase or explain away the contributions of groups they’re trying to exclude from citizenship.

Thanks for the tip, Brady!

Thank you for the laugh.

Never in the field of human conflict was so much owed by so many to so few.
Churchill

Churchill also said that it was "a question of honor", that the British help Poland become a free independent country after thousands of Polish flyers helped save Great Britain from seemingly imminent German invasion by staving off Luftwaffe. Polish fighters had the best kill to loss ratio of all RAF squandrons during the Battle of Britain (and the war), and a few Polish squadrons were leaders in the number of kills (planes shot down)amongst all RAF squadrons, even though all Polish units were not allowed to enter the Battle until roughly its' half-point (because their skills were questioned). Many high ranking British had said after the Battle of Britain (which was won by a hair) that they would have most likely lost it, had it not been for the contribution of Polish fighters.
The same Churchill then went back on his word, and along with Roosevelt gave away Poland to Stalin in Teheran and Yalta. Poland would be sacrificed to appease the Russian "bear". Polish pilots and personell, once heralded as heroes and being invited to social functions, parties and generally welcomed everywhere they went, all of a sudden became unconvenient, trouble makers, causes for the rift between the British and their new ally, uncle "Joe" Stalin. Suddenly they were there to take credit for British flyers' accomplishments, and after the war to take their jobs, women - they were unwelcome foreigners.

British memory was pretty short back then, we shouldn't be surprised noone remebers now. A nation with no honor and their historic leader - Churchill, who had none himself.