In Race, Ethnicity, and Sexuality, Joane Nagel talks about the role that the intersections between ethnicity and sexuality play in nationalist projects–that is, how they are used as groups define who is and isn’t part of the entity defined as “the nation.” Those who are part of the nation are part of “us,” and those outside it are the Other. She brings up the example of Nazi Germany. Clearly ethnicity played a huge part in definitions of nationhood as the Nazis saw it. But as Nagel points out, it went beyond that; individuals were also included or excluded from membership based on other characteristics, including sexuality. Specifically, homosexuals were marked as unworthy of inclusion and were also sent to concentration camps.

This image, found at The Pink Triangle, illustrates the intersection ethnicity and various categories, including sexuality. It shows the various markers Nazis used to identify prisoners. 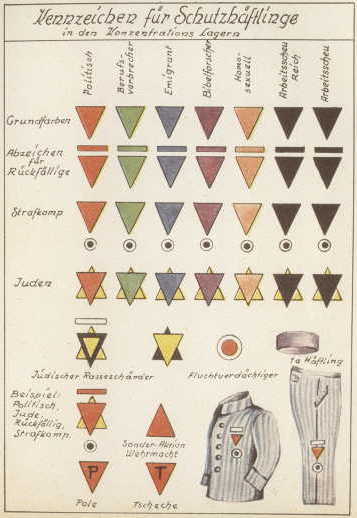 The bottom row of seven triangles clearly represents different categories of Jews. The fifth column of triangles (they look tan but they were pink) identified homosexuals. The third column (blue) was for immigrants. I believe the first column (red) was for political dissenters, but I’m not certain. We see other specified groups of Jews in the three partly-yellow triangles at the bottom, as well as triangles for Poles and Czechs. I don’t know enough German to figure the others out.

It’s a great example of a nationalist project: we can visibly see here the clear effort to define some groups as Others and the way that both ethnicity and sexuality (and the intersections) can be an important part of that, and even mark individuals as multiply stigmatized.

And Zeitzeuge says that “Special campaign Wehrmacht is a deserter from the Wehrmacht.”

I confirm, the red triangle was for political dissenters (if you look at the image, you can read "Politisch" - that is, "political").

Well, good thing we don't have programs targeted at denying people their rights based on their sexual preference. OH SHIT wait a minute...

Across the top, the categories are: political, experienced/professional criminal, immigrant, Jehovah's Witness, homosexual, and then the last two "arbeitsscheu" means either unwilling to work or afraid to work, but isn't the word for unemployed.
Down the left side, it's the ground/base color, stripes for reoffenders/relapsers, dots for "strafkamp" which has something to do with fighting, and then Jews.

Hope that helps! This is my favorite blog ever.

Labels for people in "protective custody" in the concentration camps

I cried a little bit when I saw this.

Yes, but this is Nazi Germany - hardly a common case. I'm not one of those who get offended by the mere suggestion that the holocaust can be compared to anything, but I think we can all agree they were an outlier, rather than a good example of any general trend.
(In other words: Godwin, you lose).

How can there be jewish jehova's witnesses?

> How can there be jewish jehova’s witnesses?

I find that comment to be in poor taste.

The only thing I can think of is someone they might define as Jewish ethnically, but Jehovah's Witness religious. Maybe? I don't know. It's weird.

I don't see what was "in poor taste" about that comment--I think it's a legitimate (though probably unanswerable) question.

Special campaign Wehrmacht is a deserter from the Wehrmacht.

A. There are Jewish Jehova's witnesses - they see themselves as Jews who believe Jesus was a true prophet. They have a mission in Israel that is fiercely fought against by the established Jewish institutions.

B. Like Gwen said, the Nazis defined Jewishness by ethnicity, not by religion. Quite a few Christians with "Jewish Blood" were sent to the camps - even a couple of priests. So what people believed in never prevented the Nazis from labeling them as Jewish.

C. Why on Earth should that statement be in poor taste?

[...] Gwen at Sociological Images talks about how groups are used to define who is and isn’t part of the entity defined as “the nation.” Those who are part of the nation are part of “us,” and those outside it are the Other. She brings up the example of Nazi Germany, and posts this chilling guide used in concentration camps to determine the patches that different groups were compelled to wear. Concentration Camp Signifiers [...]

Individuals deemed "anti-social" had to wear the black triangle. The majority of black-triangle prisoners were mentally retarded or homeless. But smaller groups of prisoners were also given this badge, including alcoholics, the habitually "work-shy," prostitutes, members of the aristocratic upper class and others.

Roma or Gypsies were usually classed with black-triangle prisoners, but at some camps were given a separate badge - the brown triangle - instead.

Among lesbian circles, the black triangle is sometimes used to represent lesbians because apparently they were classified as antisocial (or work-shy) rather than homosexual. It's similar to the use of the pink triangle among gay male activists.

[...] on Nazi Germany: comparing German remembrance of the Holocaust and U.S. remembrance of slavery, Nazi symbolism, Nazi celebration of motherhood, and this sympathetic memorabilia [...]

Arbeitsscheu Reich appears to be a special operation begun by the NSDAP in April and June 1938.