Bloggers and journalists have enjoyed reporting the findings of a recent study that showed that people in socially conservative states subscribe to online pornography websites at a higher rate than people in socially liberal states.  Here is some of the data from the paper: 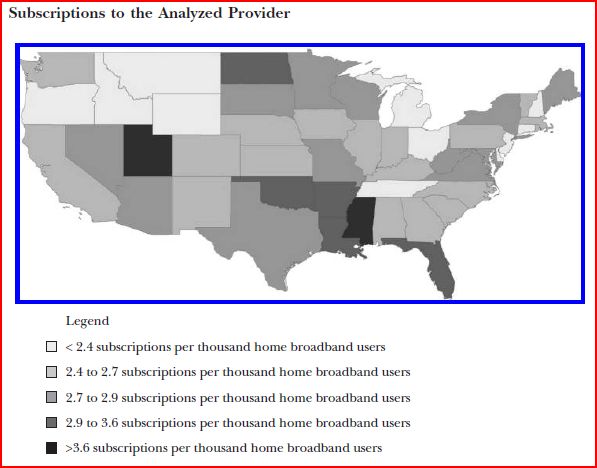 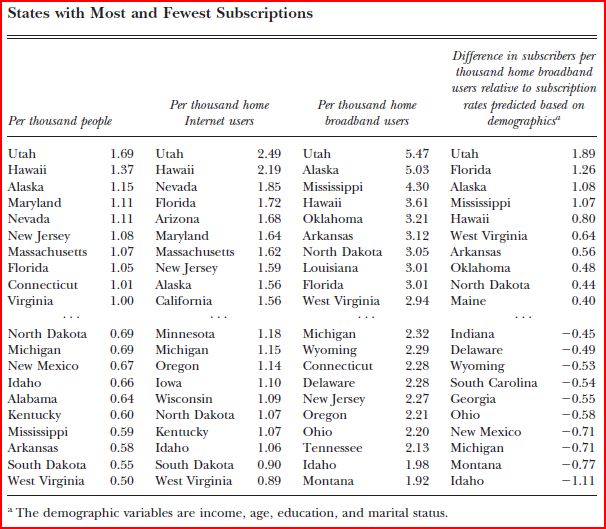 The paper goes on to discuss what variables are correlated with higher versus lower subscription rates, but ultimately concludes:

On the whole, these adult entertainment subscription patterns show a remarkable consistency: all but eleven states have betweeen two and three subscribers to this service per thousand broadband households, and all but four have between 1.5 and 3.5.  With interest in online adult entertainment relatively constant across regions, there’s little sign of  a major divide.

The reporting on this study, which emphasizes the findings, but not the low variance, is a nice illustration of how studies can be warped when they are picked up by both journalists and bloggers.

I agree it's a tiny difference. What might be interesting is to see the number of subscribers per 1/1000 plotted against network-connected population density per square mile (does this figure even exist?). Doing this by county or city instead of state may be better, too, since a bunch of Midwestern and Southern states have one or two metropolitan cities and a bunch of barely populated land. I reason that less people means less opportunities to form a relationship that is sexually fulfilling, and thus more demand for these services.

I think it's important to note that the study is measuring "subscriptions". I would be interested to note if general viewing (in other words, not paying monthly for a delivered service or some such) is more or less equal. That would be based on the idea that internet proficiency differs between the two populations, which is probably at least as controversial in its own way as the conclusions people are drawing from this study

Nice post! Can I have more statistics of that? Thanks: fernandes@bcc.ufla.br

Umm... I think a commenting/moderating policy needs to be implemented? This is not cool.

sex available for all in n Guwahati