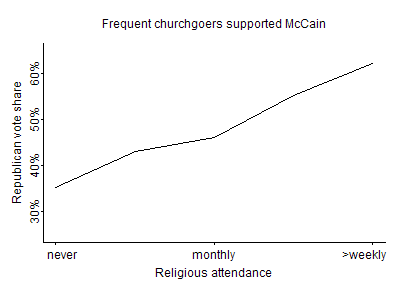 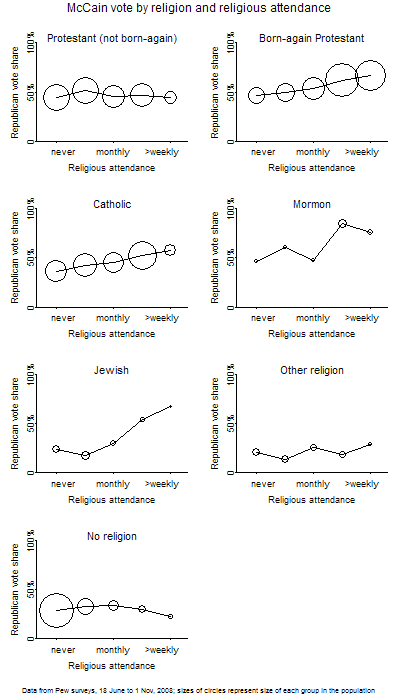 The size of each circle is proportional to the number of people represented in the survey. In particular, most of the people who attend church more than weekly are born-again Protestants.

Another interesting thing to look at is the how income interacts with religion to influence voting patterns. These graphs show the McCain vote by income among various religious groups: 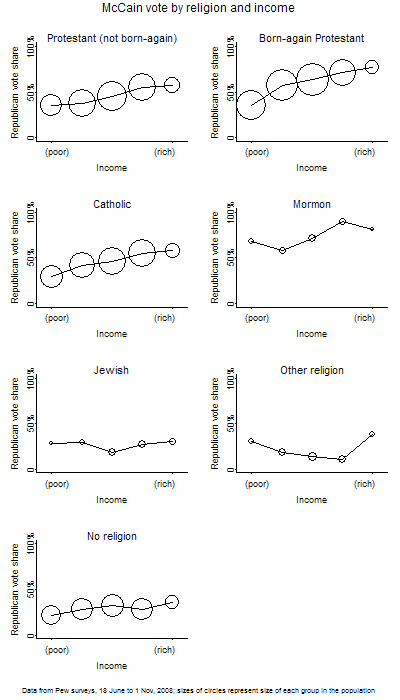 Notice that among Jews and the non-religious, increased income didn’t substantially increase the chances of voting for McCain (and those in the “other” category are just confusing). For these groups, being rich doesn’t appear to have been enough to draw them to McCain, whereas for most Christians we see a clear trend: the richer adherents were, the more likely they were to vote Republican. Both Jews and non-adherents started out much less likely to vote for the Republican ticket, and their opposition was strong enough that it trumped what we would expect to see if people voted on a narrow interpretation of self-interest (i.e., “I make $300,000 and Obama says he’ll raise income taxes on incomes above $250,000, so I’ll vote for the other guy”). Presumably Republican positions on social issues, or close association with evangelical Christians, put off some wealthy non-religious and Jewish voters who might otherwise be likely to vote for them based on fiscal policy, but that’s just a guess, since we don’t have data here on voters’ explanations of their candidate preferences.

What, exactly, are those no religion people attending?

My guess is it's people like me who aren't religious but go a few times a year with my grandma to make her happy and avoid being nagged at the rest of the year, but that's just a guess. I do know one woman who says she isn't religious but goes to Catholic services regularly. I don't know why.